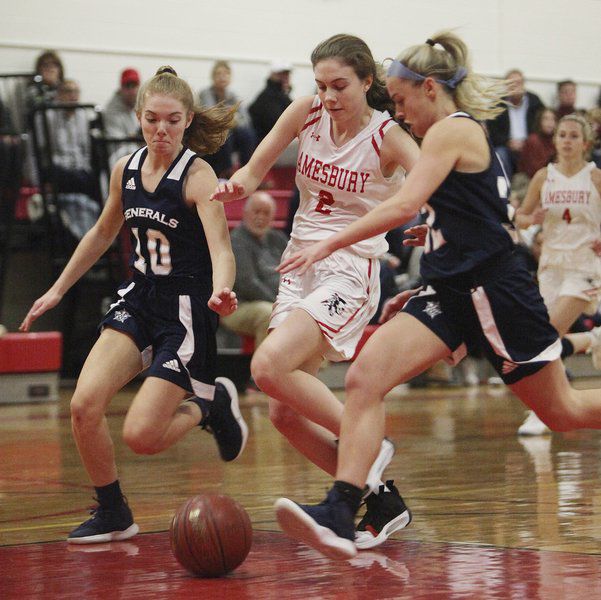 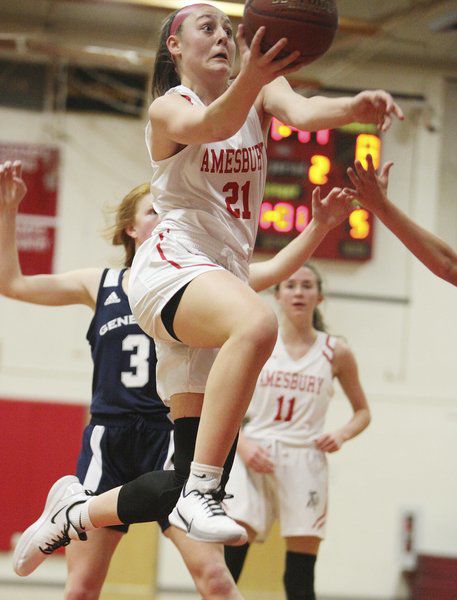 Nicole Goodhue-Boyd photoAmesbury’s Alli Napoli goes up for a basket during Friday’s 52-21 win over Hamilton-Wenham. 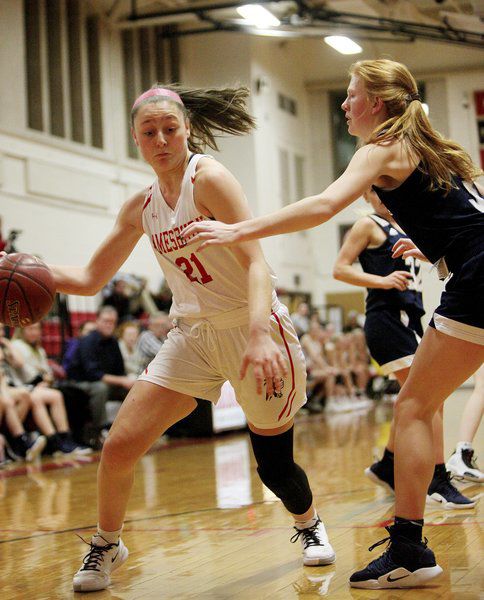 Nicole Goodhue-Boyd photoAmesbury’s Alli Napoli goes up for a basket during Friday’s 52-21 win over Hamilton-Wenham.

AMESBURY — We all knew Amesbury girls basketball would be good. Any team with players like Alli Napoli and Avery Hallinan coming back from a Division 3 North finalist would clearly have a leg up.

But with Amesbury's all-time leading scorer Flannery O'Connor now posting up double doubles every night at Framingham State, would there be enough left to make a run against the very best?

So far the answer has been a resounding yes, and Friday night was a perfect example of why.

Jumping out to a 15-0 lead in the first, Amesbury's swarming defense was all over Hamilton-Wenham and effectively ended the game before it started. The Generals kept it competitive for a while, but eventually the Indians proved too much in the dominant 52-21 win.

With the win, Amesbury remains undefeated at the season's midway point, carrying a 10-0 record into Monday's MLK Day face-off against Manchester Essex.

"I think we've been able to play tough defense," said Amesbury coach Gregg Dollas. "We've had really good defense and we've worked together. A lot of different girls have had scoring nights that you don't expect sometimes, and if that happens where you have three or four scorers happening, that's going to help you have success."

Defense has been Amesbury's bread and butter all season, as the Indians have now beaten nine of their 10 opponents by double digits, with an average margin of victory of more than 20. Offensively, senior point guard Alli Napoli (13.0 points per game) has been the constant, and the Central Connecticut State University commit did it all once again Friday, leading Amesbury with 15 points and 13 rebounds.

But as usual, Napoli didn't have to do it alone. Friday it was Ciara Sullivan who stepped up, knocking down three 3-pointers on her way to an impressive 11 point outing.

"Ciara, she was struggling a bit shooting, so we reset her shooting form the other day, and we just worked on it in practice the last couple of days, and it helped tonight," Dollas said. "So hopefully it keeps helping her as we keep going. It was nice to hit some threes."

Izzy Cambece (8 points) and Ava Harlow (6 points) were the other top scorers, and Avery and McKenna Hallinan were both terrors defensively, particularly early when Amesbury opened up its initial lead.

After Amesbury finished the first quarter leading 17-3, Hamilton-Wenham responded with some tough defense of its own to keep things competitive. The halftime score was 28-8 and after the third it was still 36-17, but Amesbury finished the job with a 5-0 run to start the fourth, after which point the reserves came off the bench and the game was effectively over.

Amesbury (10-0) will face Manchester Essex on Monday and Georgetown next Friday before entering the teeth of its schedule. The Indians will face defending state champion Pentucket in a highly anticipated showdown on Tuesday, Jan. 28, and after that the Indians will run through a gauntlet that includes Swampscott, Newburyport, Manchester Essex again and then Masconomet.