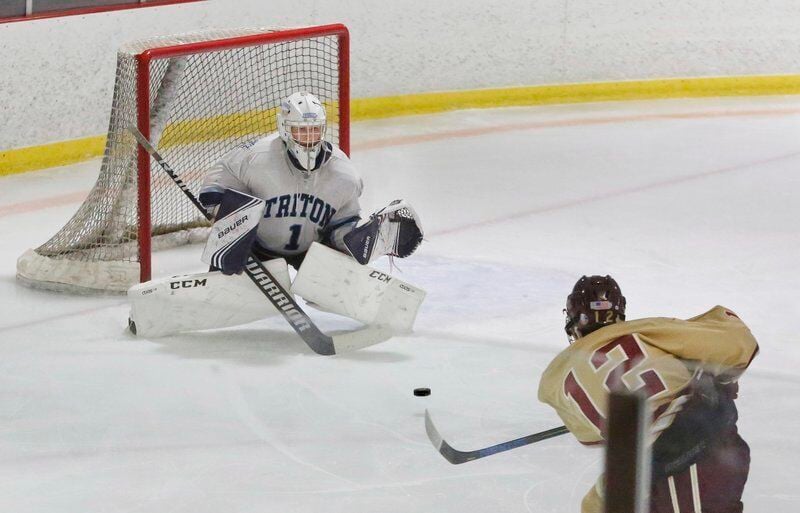 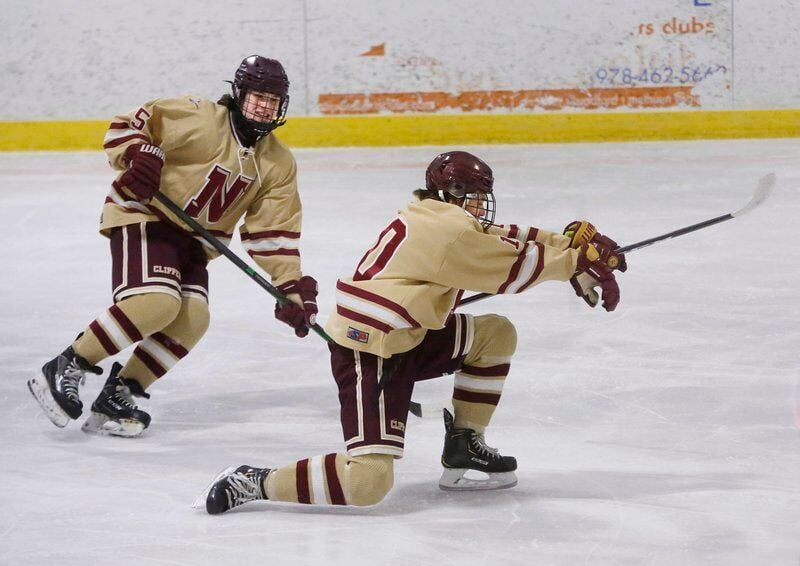 MIKE SPRINGER/Staff photoNewburyport's Zach McHugh celebrates one of his two goals against Triton as teammate Max Puleo, left, looks on. McHugh scored twice in quick succession to give Newburyport the lead, and the Clippers would later go on to win 3-2 on a late Ryan Archer goal. 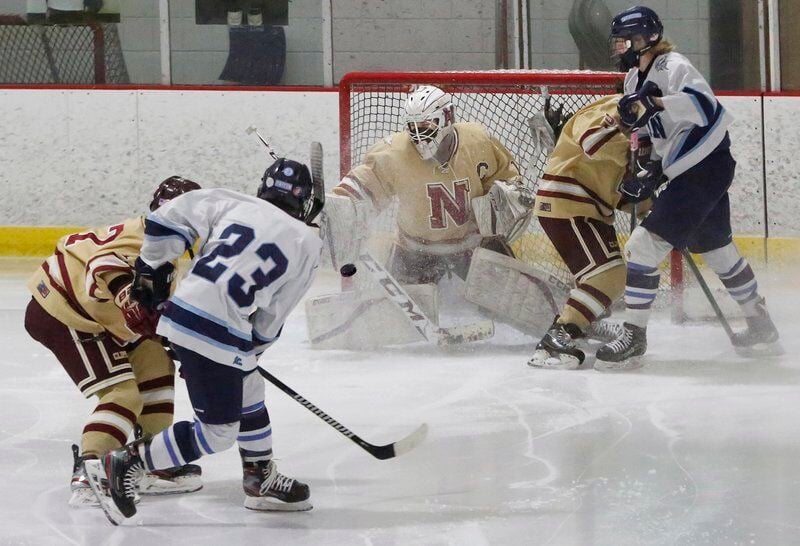 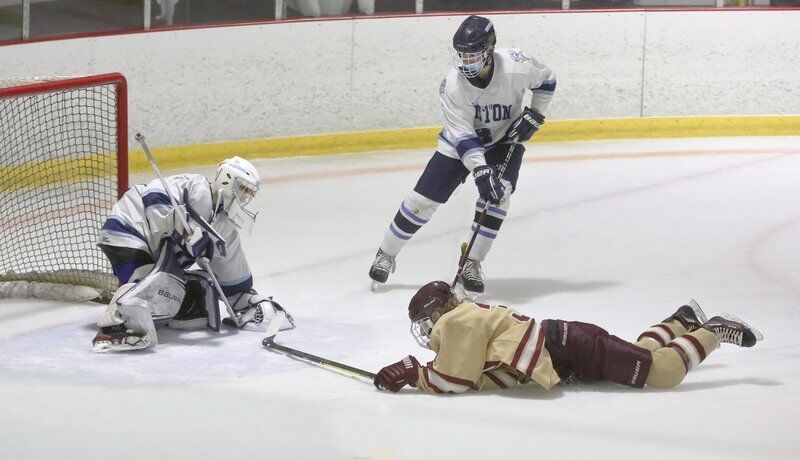 MIKE SPRINGER/Staff photoNewburyport's Zach McHugh celebrates one of his two goals against Triton as teammate Max Puleo, left, looks on. McHugh scored twice in quick succession to give Newburyport the lead, and the Clippers would later go on to win 3-2 on a late Ryan Archer goal.

NEWBURYPORT — A regular-season split, a non-league stalemate and 42:59 of dead-even, can’t-separate-‘em hockey on Friday night at Graf Rink. Clearly, something spectacular would be necessary to separate the hockey teams from Newburyport High and Triton Regional this season.

The Newburyport senior perfectly bunted an Tucker St. Lawrence clearing flip out of midair at center ice, sending himself through the Vikings’ defensive pair and beating the Triton goalie – barely – for the game-winning, Cape Ann League Tournament championship-clinching goal with just 2:01 left in regulation.

The dramatic 3-2 season-ending victory, played before just parents of the senior players from both schools, could not have been sweeter, considering the sacrifices made by all involved, just to have a season.

“This was our state tournament. We have eight seniors, I just wanted them to end their career with a win, against their rival,” said Newburyport coach Paul Yameen, whose Clippers finish up at 10-1-1 with Triton providing the lone nicks on the resume. “Quite a different season, but we ended it the way we wanted. It’s a good rivalry. I said it before. I respect the seniors over there (on the Triton side). When we don’t play them, I root for them.”

For Archer, it was a bit of satisfaction, especially since he had been denied basically all night, including a scorcher that dented the cross-bar, early in the second period.

“A lot was going through my head. I didn’t have the best game ever, but I’ve always had this fight in me,” said Archer. “You know I’ve been told I’m too small, you aren’t good enough … Finally, I had the chance to shut everyone up, show people what I can do. It’s just an incredible feeling.

The elite hand-eye is one thing, something Clipper fans will see more of this spring on the baseball diamond. But, it’s practice and, for sure, a little luck, that sent Archer into the clear.

“He scored the same kind of goal the other night against North Reading to go ahead," Yameen said. "Just a good play by two really good seniors.”

For the fourth time this winter, these two CAL powers tore into each other from the opening faceoff.

Triton struck first, just 5:58 in when some fierce forechecking from senior James Tatro led to an errant Clipper clear.

Brady Lindholm pounced on the loose puck at the right point and wristed a knuckler, through a Tatro screen, that beat the Newburyport goalie to the blocker side. Triton would carry that lead into the first break.

The Port found its legs off the snap in the second and played its best hockey in a four-minute barrage that would yield not only Archer’s crossbar-clanger, but the equalizer and go-ahead goals – both from sophomore Zach McHugh.

McHugh’s laser from 30 feet off a faceoff tied things at 1-1, and just 62 seconds later, he’d rip off another labeled wrister for the lead.

“One goal wasn’t going to stop us, so it was just all about getting pucks to the net,” said McHugh, who was quite emotional in the victory. “Everyone was getting up. I let my emotions get to me. You saw the big celebration. I was feeling it.”

And so were the Clippers, taking the 2-1 advantage into the third.

But Triton is dangerous, and the Vikes were not about to go away. They took charge in the third and never relented.

The top line of Tatro, Ryan Lindholm and Cael Kohan logged plenty of ice time, and they found a way to knot things at 2-2 just three minutes into the third.

Tatro whiffed on a centering attempt, and made up for it, dropping a sweet pass back to Alex Monteiro at the right point. Goalie Jackson Marshall stopped it, but Ryan Lindholm scooped up the loose rebound and rifled it home to tie.

The teams would then both have chances before Archer found a way late and played the hero’s role to perfection.

“(The Clippers) always come out with some energy. They like to bang around. It’s always a good high school hockey game (when these two teams meet),” said Triton coach Ryan Sheehan, whose club closes out at 9-2-1. “Because of the rivalry, I think it’s what both teams expected.

“We executed the gameplan we wanted to, and they really played well. I think that’s why you saw a 3-2 game.”

Sheehan will now have the tough task of replacing a dozen seniors, each of whom has contributed over the years.

“Just having a season, the passion our team showed and that other teams showed throughout the year meant this game was going to be big,” said Sheehan.

“This is a great group of seniors. They’ve been here four years, and they’ve accomplished a ton. Been to the state tournament twice, and went deep in two of them. They just leave a good legacy with the program. Hopefully, we can continue to compound off what they gave us.”

In the end, the night, the championship and this COVID-shortened hockey season belonged to Newburyport High.

“Not a doubt in our mind (we are the better team),” stated Archer.

“This is our house, our building, our barn.”

And with Friday night’s win, it’s their title.