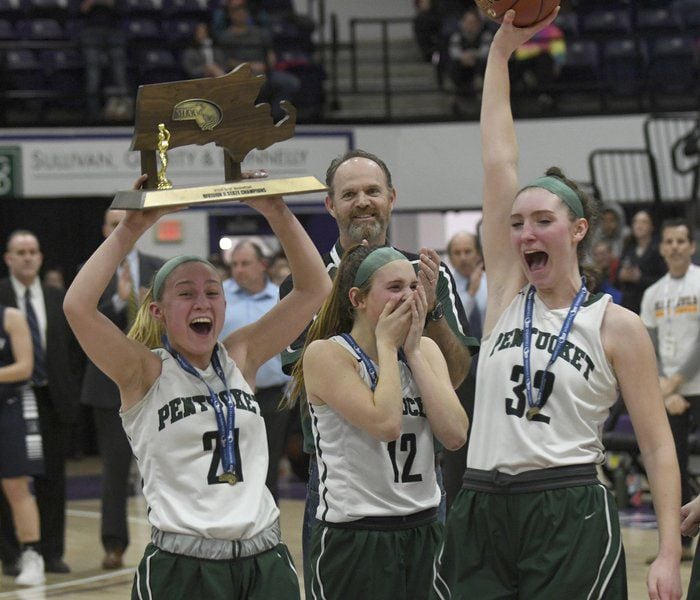 JIM VAIKNORAS/Staff photoPentucket's Maddi Doyle, Jess Galvin and Liv Cross celebrate after winning the Division 2 state championship this past March. It was the program's second state title this decade, capping off a remarkable run of success for John McNamara's team. 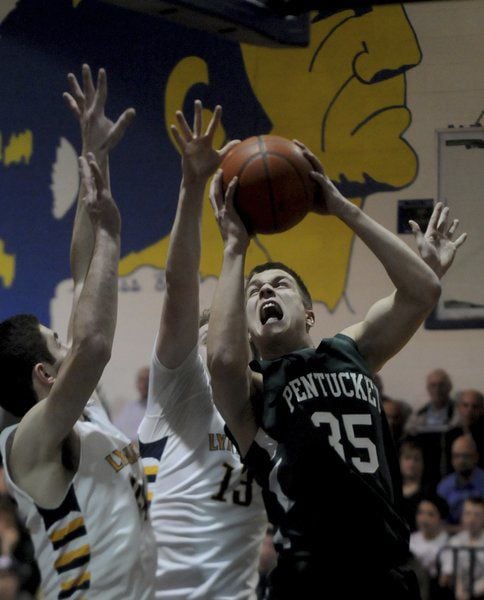 JIM VAIKNORAS/Staff photoFuture Penn State football star Pat Freiermuth fights his way to the basket against Lynnfield in 2015. The Sachems went on to win the Division 3 North championship and reach the state semifinals at the TD Garden. 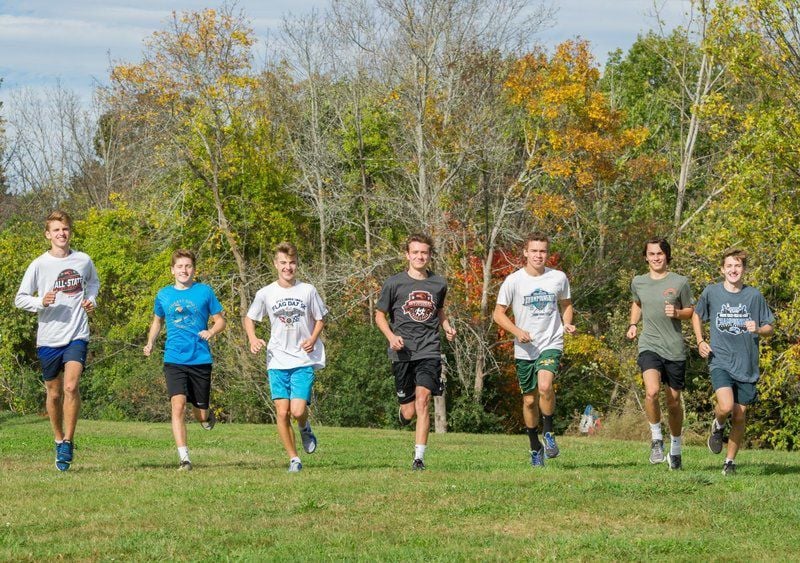 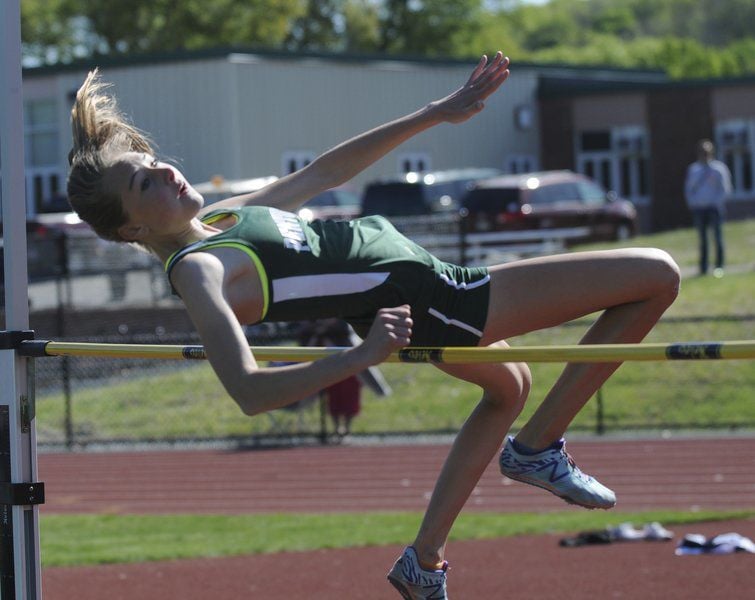 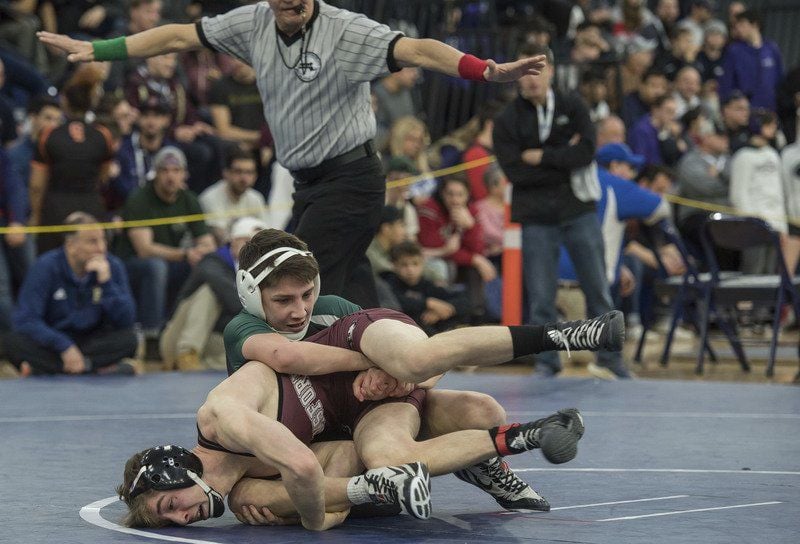 AMANDA SABGA/Staff photoPentucket's Tyler Knox won the All-State wrestling championship at 106 pounds this past winter, becoming the first Sachem to do so under the current MIAA postseason format.

JIM VAIKNORAS/Staff photoPentucket's Maddi Doyle, Jess Galvin and Liv Cross celebrate after winning the Division 2 state championship this past March. It was the program's second state title this decade, capping off a remarkable run of success for John McNamara's team.

JIM VAIKNORAS/Staff photoFuture Penn State football star Pat Freiermuth fights his way to the basket against Lynnfield in 2015. The Sachems went on to win the Division 3 North championship and reach the state semifinals at the TD Garden.

AMANDA SABGA/Staff photoPentucket's Tyler Knox won the All-State wrestling championship at 106 pounds this past winter, becoming the first Sachem to do so under the current MIAA postseason format.

With the 2019-20 school year fast approaching, we at The Daily News wanted to take one last opportunity to look back at the best moments from the last decade. This week we’ll be highlighting the best of the 2010s from each local school, and today we’ll check out the highlights from the past decade at Pentucket Regional High School.

A decade of excellence

What more can be said about the Pentucket girls basketball team? For the past decade, John McNamara’s dynastic program has continuously elevated itself to greater and greater heights, and no local program was consistently as successful in the postseason as the Sachems.

Pentucket was the only Greater Newburyport area team to qualify for the state tournament in all 10 seasons of the 2010s, and no other team consistently made deep runs like the Sachems. Pentucket compiled a state tournament record of 26-8 over the past 10 seasons, winning five sectional titles (2010, 12-13, 18-19), reaching three state finals (2010, 12, 19) and winning two state championships (2012, 19).

The Sachems won no matter who was available to suit up. In the early part of the decade, Pentucket had a murderer’s row of top-end talent, including players like Erin and Kelsi McNamara, Ashley and Coley Viselli, Sarah Higgins, McKenna Kilian and many, many others. After Kelsi McNamara graduated in 2015 as the school’s all-time leading scorer, Pentucket’s well of talent seemingly dried up. But instead of taking a step back, the Sachems continued dominating opponents with smothering defense, despite going several years in a row without having a player average more than 10 points per game.

Then, this past winter, Pentucket perfected its system by combining that ruthless, team-first approach with its most talented roster in years. Driven by a devastating loss in the state semifinals the previous season, the Sachems marched back to the state semifinals and exorcised those demons at the TD Garden. Then, the girls finished the job with a perfectly Pentucket finish in the final, holding Northampton to just six points in the first half en route to the Division 2 state championship.

Don’t think the girls basketball team was the only one having fun on the Garden’s parquet this decade. In 2015, the boys basketball team got in on the action too, enjoying its deepest run in program history to win the Division 3 North championship.

Led by future Penn State football star Pat Freiermuth, then a sophomore big man for the Sachems, coach Ed Hickey’s Pentucket team caught fire down the stretch, winning its first four tournament games to clinch a trip to the TD Garden. Freiermuth scored 31 points in the team’s first round win against Weston, followed that with 20 points each against Lynnfield and Greater Lawrence, and then scored 13 of his 23 points in the fourth quarter against Arlington Catholic to clinch the program’s first sectional title.

Though Pentucket fell short in the state semifinals to Old Rochester, Freiermuth had arguably his best game yet on the Garden floor, scoring 18 points with 22 rebounds in the 63-49 loss. The Sachems, who finished 17-6, were hardly a one-man show either, featuring a deep, senior-laden lineup that also included standouts like Pat Beaton, Connor Beaton, Ryan Beaton, Will Sullivan and Jeff Porter.

The fall of 2017 was a season to remember for the Pentucket boys cross country team. The young Sachems, whose top runners included three sophomores and a freshman, swept through the Cape Ann League to win the program’s first league title since 2003, and then followed that up with a narrow victory over Norwell at the Division 5 Eastern Mass championship meet.

After Norwell’s big two of Steven O’Driscoll and Andrew Corbett came in 1-2, Pentucket’s unmatched depth carried it the rest of the way. Top runner Peter Lopata, a sophomore, was the first one across in third overall, followed by fellow sophomore Sam Stys in seventh, senior Nick Murphy in 12th, sophomore David Gangemi in 30th and freshman Colin Costa in 31st out of 165 runners. The victory marked Pentucket’s first EMass title since 1992.

The Sachems capped off their remarkable season the following week, finishing second at the Division 2 All-State meet. Lopata, who is set to return for a big senior year this fall, once again led the pack, finishing 12th overall.

When Saige Tudisco wrapped up her stellar track career in the spring of 2018, it seemed like there was hardly a mark in the Pentucket record book that she hadn’t broken.

That’s an exaggeration of course, she didn’t actually break all of them. She only broke 22.

“I have been fortunate to have coached some amazing athletes over the years but Saige is the best I have had,” said longtime Pentucket track coach Steve Derro.

Now a standout at the University of New Hampshire, Tudisco regularly turned in championship caliber performances during her time at Pentucket between 2014-18. She won four state championships, including three Division 3 titles in the 100-meter hurdles and long jump and an All-State title in the long jump in 2017. She also finished second in both events at All-States as a senior, won the North Sectional heptathlon and competed at both the New England Championships and New Balance Outdoor Nationals.

Tudisco was also an essential piece of the most successful Pentucket girls indoor track team in program history, the 2017-18 squad that captured the program’s first state title. By the time she was done, she had earned nearly every accolade a high school track athlete can earn. Among them, she was a four-time Daily News MVP, a Boston Globe and Herald All-Scholastic, and she is one of four girls track athletes in history to be honored as Eagle-Tribune MVP three or more times.

How would you feel if I told you that the most accomplished wrestler in Pentucket history only just completed his freshman year? It’s true, and it’s not an exaggeration. What Tyler Knox has accomplished in two seasons for the Sachems is unprecedented locally, and if he stays at Pentucket and continues at his current pace, he will graduate three years from now as the best the area has ever seen.

Since making varsity as an eight grader in 2017-18, Knox has already compiled a career record of 94-11. This winter he went 54-3 as a freshman, going undefeated at 106 pounds until the finals of the New England championships, winning the sectional, Division 3 state and All-State titles along the way. After finishing second at New Englands to the eventual Junior Nationals champion, Knox went on to go 5-2 at Freshman Nationals, finishing one win short of a spot on the podium. Given that both of his losses came to eventual top-three placers, Knox wound up finishing the year having only lost to wrestlers who medaled at nationals.

Knox is the only Pentucket wrestler to ever win an All-State title under the MIAA’s current postseason format, and barring any changes of circumstance, he is on pace to smash the area’s all-time wins record currently held by Triton’s Luke Boyle (199 wins) and likely to be broken next winter by rising Triton senior Anthony Ostrander (162 wins and counting).