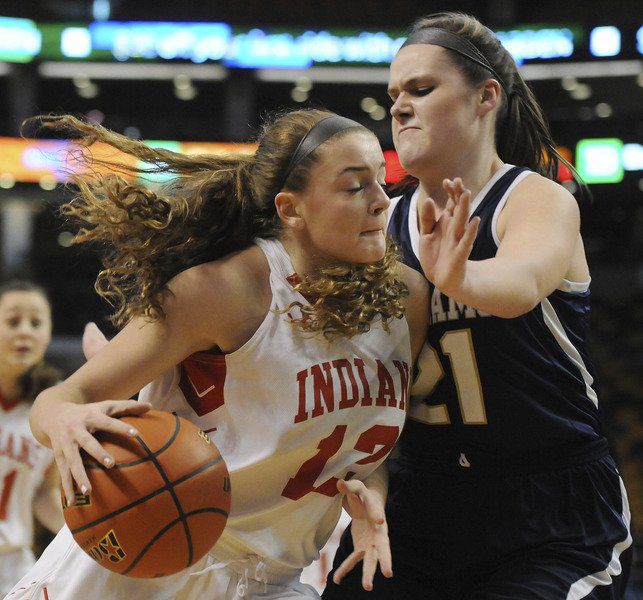 PAUL BILODEAU/Staff photoAmesbury's Flannery O'Connor drives to the basket against an Archbishop Williams defender in the 2017 Division 3 state semifinals at the TD Garden. The Indians lost to the eventual state champions, but finished one of the greatest seasons in school history 22-2 overall. 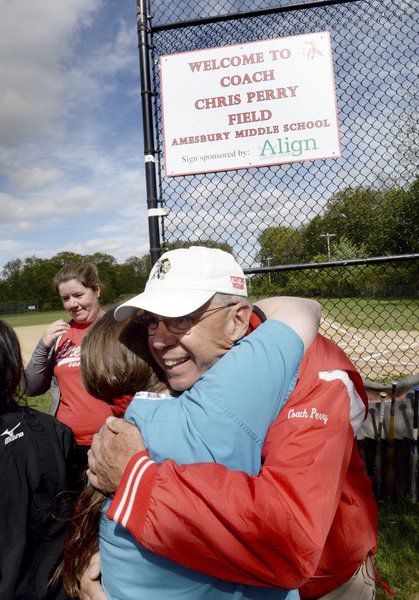 BRYAN EATON/Staff photoFormer Amesbury softball coach Chris Perry is congratulated by former players after the official dedication of the Amesbury softball field being renamed in his honor. Perry's final team in 2015 exceeded all expectations and made a run to the Division 3 state semifinal. 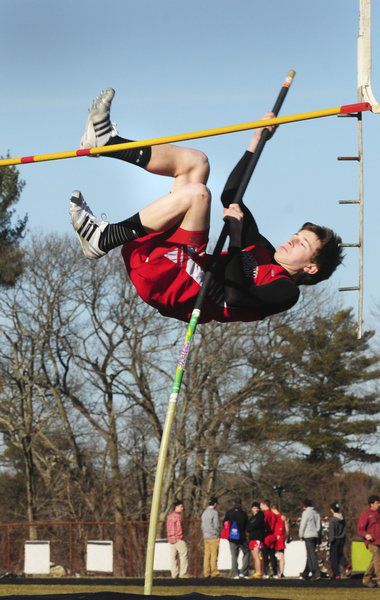 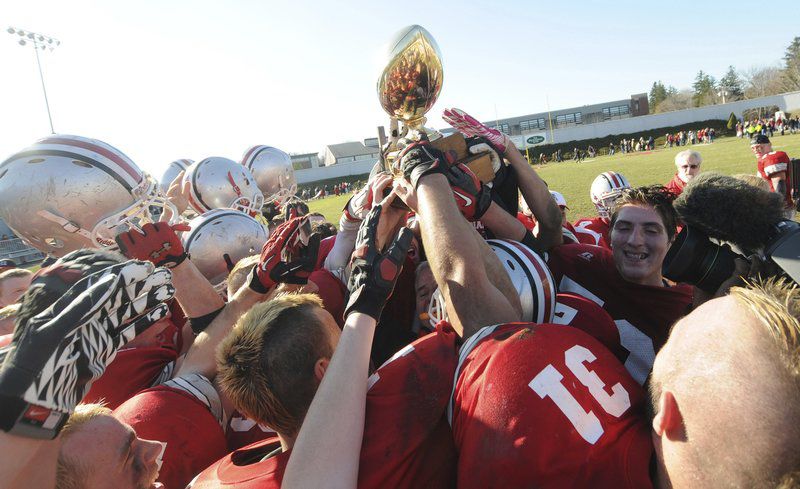 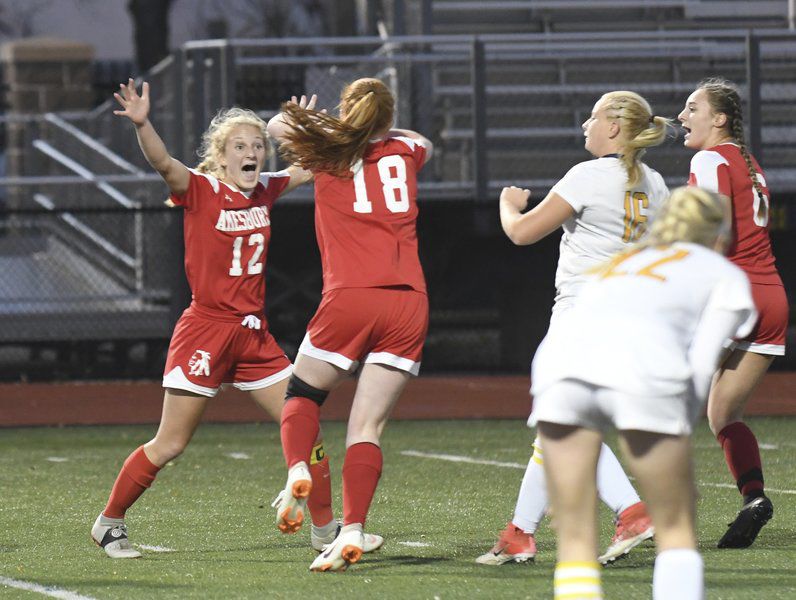 JIM VAIKNORAS/Staff photoAmesbury's Chelsea Lynch (12) throws up her arms in celebration after teammate Gracie Doherty (18) scored what turned out to be the game-winning goal in last fall's Division 4 North semifinal win over St. Mary's. The Indians went on to beat Manchester Essex in the North Final to advance to the program's third consecutive state semifinal.

PAUL BILODEAU/Staff photoAmesbury's Flannery O'Connor drives to the basket against an Archbishop Williams defender in the 2017 Division 3 state semifinals at the TD Garden. The Indians lost to the eventual state champions, but finished one of the greatest seasons in school history 22-2 overall.

BRYAN EATON/Staff photoFormer Amesbury softball coach Chris Perry is congratulated by former players after the official dedication of the Amesbury softball field being renamed in his honor. Perry's final team in 2015 exceeded all expectations and made a run to the Division 3 state semifinal.

JIM VAIKNORAS/Staff photoAmesbury's Chelsea Lynch (12) throws up her arms in celebration after teammate Gracie Doherty (18) scored what turned out to be the game-winning goal in last fall's Division 4 North semifinal win over St. Mary's. The Indians went on to beat Manchester Essex in the North Final to advance to the program's third consecutive state semifinal.

With the 2019-20 school year fast approaching, we at The Daily News wanted to take one last opportunity to look back at the best moments from the last decade. This week we’ll be highlighting the best of the 2010s from each local school, and today we’ll check out the highlights from the past decade at Amesbury High School.

Taken on the whole, the 2010s weren’t always kind to the Amesbury High football program. But on two occasions, the Indians shook off a rough season, dedicated themselves in the offseason and then emerged the following year as a force to be reckoned with.

The first came in 2012, when Amesbury entered the fall coming off a three-win season. The senior-laden Indians didn’t get off to the best start, going 1-2 in their first three games, but then the Thom Connors coached squad caught fire and won its last eight games to close out the regular season. That included an emotional win over Pentucket and a playoff-clinching win over Newburyport on Thanksgiving Day to close out the schedule.

While Amesbury would lose to Lynnfield in the Division 3A playoffs and fall one win short of the Super Bowl, it was still a milestone achievement for the Indians. The 2012 team was only the third in Amesbury High history to qualify for the state tournament following the 2007 and 2008 teams (the 1970 state championship came before the inception of the playoff format), and it proved to be the high water mark for the rest of the decade... until last fall.

Much like their predecessors, the players on the 2018 Amesbury football team had gone through some hard times. The team only won two games in 2017, starting 0-7 before getting smashed on Thanksgiving by Newburyport. But come last fall, things quickly turned around, as coach Colin McQueen’s Indians rolled through their schedule on the strength of a fearsome defense. Amesbury finished 9-2 while recording four shutouts, and the Indians qualified for the state tournament for the first time in six years. Once there, Amesbury won its first two postseason games, reaching the Division 5 North Final before losing a shootout to Swampscott.

Amesbury ended the year on a happy note, however, returning the favor against Newburyport with an 8-0 shutout at Landry Stadium on a bone-chilling, 15-degree Thanksgiving morning.

During his three-plus decades as Amesbury High softball coach, Chris Perry built a perennial dynasty that remains one of the crown jewels of the athletic department. His teams went 576-124, including 22 Cape Ann League titles and four state championships in 1988, 1989, 1997 and 2000, and in his final season as coach in 2015, his young but talented players nearly sent him into retirement with a fifth.

Despite only having two seniors on the roster — Meagan Aponas and Autumn Kligerman — Amesbury quickly established itself as a contender, going undefeated in league play while finishing the regular season 19-2 to earn the top seed in the Division 3 North tournament. The Indians were led by the freshmen battery duo of pitcher Hayley Catania and catcher Caity Baker, junior second baseman Lauren Fedorchak, sophomore shortstop Maddie Napoli and others, and once in the tournament, the Indians beat CAL rivals Lynnfield and Rockport, shut out Winthrop 9-0 and then came back to beat Austin Prep 5-4 in the North Finals.

While Amesbury would lose to Millis in the state semifinal by a score of 9-7, Perry said afterwards that he was incredibly proud of the girls, who exceeded all expectations in making in that far.

“To be honest, I never thought we would get to this level and be in the semifinal,” Perry told The Daily News. “They had a great season. It shocked me. It was fun and they’re great kids that play hard. It happens. I have no complaints. I’d like to change some things, but I have no complaints. It was a good season.”

Prior to the 2016-17 season, the Amesbury girls basketball program didn’t have much tradition and had no recent postseason success to speak of. But the Indians did have some talent, and a year earlier the girls learned to buy in to new coach Matt Willis’ system and philosophies. The girls dedicated themselves to the sport and believed they could be great, and when the season tipped off in December, it was immediately clear that things were going to be different.

From start to finish, the 2016-17 Amesbury girls basketball team was a wagon. The Indians were as talented as they were deep, getting meaningful contributions all across the lineup to a degree where it was impossible for any team to effectively shut them down.

Want to double team leading scorer Flannery O’Connor? Four other girls (Maddie and Alli Napoli, Abbie Sartori, Julia LaMontagne) averaged more than eight points per game and could hurt you too. Want to wear out the starters and try your luck against the reserves? Two future Division 1 athletes (Alli Napoli, Central Connecticut basketball; Chelsea Lynch, UMass Lowell track) were coming off the bench. Want to gum up the floor and try to win a low-scoring tractor pull? Amesbury allowed only 38.2 points per game and could play that style as well as anybody.

Amesbury finished the regular season 19-1, with the lone loss coming to perennial Cape Ann League power Pentucket, and cruised through the Division 3 North tournament with wins over North Reading, St. Mary’s and Bishop Fenwick to clinch the sectional title and a trip to the TD Garden. While the Indians’ state title hopes were dashed after eventual champion Archbishop Williams mounted a late comeback in the state semifinal, it was still a special season, one that helped set a new standard that future teams have continued to strive for in the years since.

Queens of the North

For the last three seasons, the Amesbury girls soccer team has ruled the roost in the Division 4 North section. The Indians have captured each of the last three sectional titles, on all three occasions starting as the No. 6 seed before dispatching a tough Catholic school or a Cape Ann League rival to earn a berth in the state semifinals.

The 2016 team set the tone, dominating Innovation Academy, Matignon, Austin Prep and St. Mary’s in the tournament. In 2017, Amesbury once again made the field as the No. 6 seed before recording shutouts in all four of its North Tournament games, including a 6-0 demolition of St. Joseph’s Prep in the North Final. Finally, in 2018, Amesbury picked up two easily early-round wins before downing St. Mary’s in a 1-0 thriller in the North Semifinals, followed by a thrilling 2-1 overtime win against Manchester Essex in the North Final.

Though all three of Amesbury’s state semifinal appearances ended with painful losses to the eventual state champion, it’s still a run of success unlike any in program history. The teams each had their own unique flavor, but the same core of players — including standouts like Chelsea Lynch, Emma DiPietro, Ashley and Alyssa Pettet, Alli Napoli, Julia Lamontagne, Maddy Creps and others — played a prominent role throughout.

Ernie Bissaillon has been a constant presence within the Amesbury running community for decades now, and while his teams have almost always been competitive, usually there hasn’t been quite enough depth to compete with the top programs at the highest levels. But over the past five years that has begun to change, as Amesbury’s cross country and track programs have successfully captured four state championships while finishing runner-up or third on eight other occasions.

The first signs came in 2015, when the boys outdoor track and cross country teams each finished third at their respective state meets. In the spring of 2016, the Indians broke through with their first outdoor track state title in program history, led by state championship performances by Fred Halloran in the 400-meter hurdles and Heath King in the pole vault. A few months later, the 2016 boys cross country team matched the feat, winning its first title since the 1970s after Patrick McCue won the individual title at the Division 6 state meet.

The girls got in on the action the following year, when the 2017 indoor track team took third at states and the outdoor team placed second. Then in the spring of 2018, Amesbury track enjoyed the greatest day in program history, with the girls winning the state title while the boys finished a very close second. The two teams repeated the feat this past spring, and all told the Indians were able to accumulate 24 individual state championships this decade, including a historic All-State title for Caroline Schissel in the 100-meter dash this past spring.