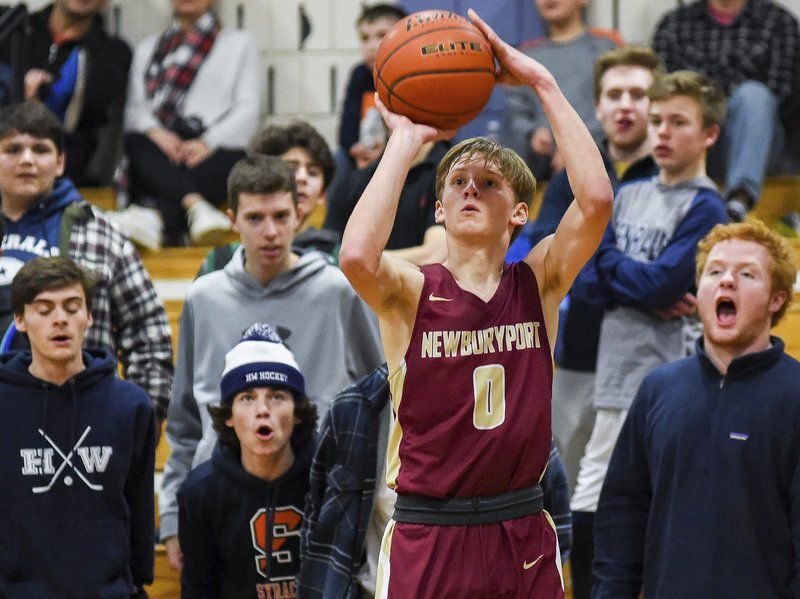 JAIME CAMPOS/Staff photoNewburyport sophomore Jack Fehlner has broken out as a lethal 3-point shooting threat for the Clippers, having made 27 threes for the CAL Kinney champion Clippers. 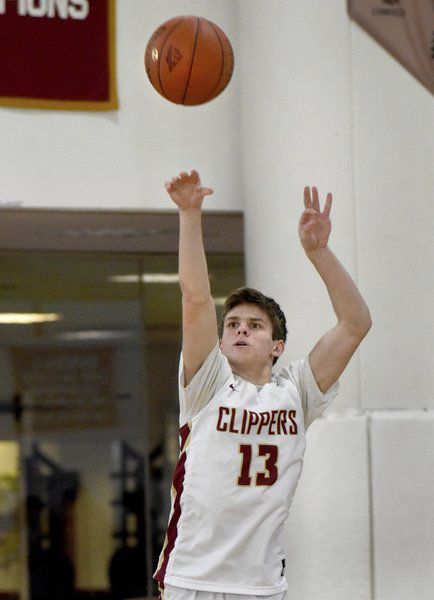 BRYAN EATON/Staff photoNewburyport's Jacob Robertson has made 59 3-pointers so far this winter, leading what has been an area-wide boom in 3-point shooting across the region. 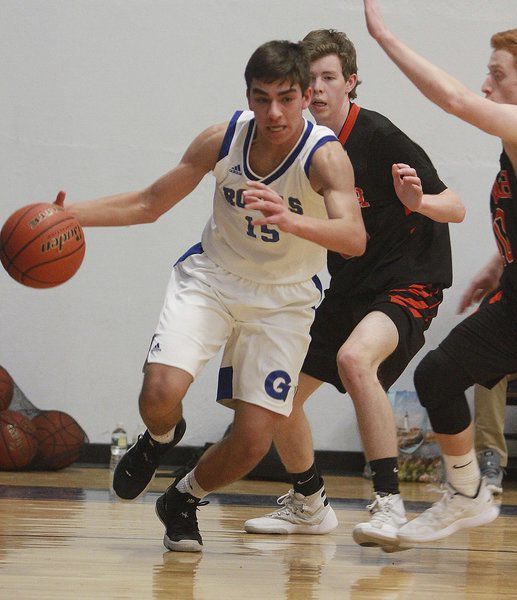 Nicole Goodhue Boyd photoGeorgetown's Jack Lucido has made 54 3-pointers for the Royals, helping power one of the most prolific 3-point shooting offenses the area has ever seen.

JAIME CAMPOS/Staff photoNewburyport sophomore Jack Fehlner has broken out as a lethal 3-point shooting threat for the Clippers, having made 27 threes for the CAL Kinney champion Clippers.

BRYAN EATON/Staff photoNewburyport's Jacob Robertson has made 59 3-pointers so far this winter, leading what has been an area-wide boom in 3-point shooting across the region.

Nicole Goodhue Boyd photoGeorgetown's Jack Lucido has made 54 3-pointers for the Royals, helping power one of the most prolific 3-point shooting offenses the area has ever seen.

Over the past decade, the 3-point shot has changed the game of basketball. Long an ancillary part of the sport, teams like the Golden State Warriors and Houston Rockets have supercharged their offenses by going all-in on 3-point shooting and proven that it’s possible to contend for a championship by doing so.

Today, basketball has become almost unrecognizable from what it was as recently as 10 years ago, and those changes have steadily trickled down to the college and high school games. Players are shooting and making more threes than ever before at all levels of basketball, and this winter we’ve seen the revolution truly take hold here in Greater Newburyport, particularly among the boys.

Across the five local Cape Ann League schools, 3-point shooting has spiked, with Newburyport and Georgetown leading the way with approximately 10 made threes per game. While shooting numbers have been trending upwards locally for years, the numbers this season have been remarkable.

In 2017-18, local teams combined to make 585 3-pointers all season, and there were only six players who made 20 or more threes. Last winter, that number increased to 614 and the number of players to make at least 20 threes doubled to 12.

This winter, with at least 17 games remaining between the five schools, local shooters have already surpassed those totals with 643 made 3-pointers. Twelve players have already made 20 threes and nine of those are already over 30. If teams continue to shoot at their current averages, the final number projects to approximately 777, which would be a 32.8% increase in just two years. There should be at least 16 players with 20 threes and 12 with 30 by the end too, and if a couple of teams go on a deep tournament run, all of those numbers will grow even higher.

“Usually if you look at the box, the teams that make the most threes usually win the game,” said Georgetown coach Josh Keilty, whose team is averaging 10.5 threes per game. “You just don’t see what you used to see 10 years ago with those dominant post guys anymore, I think a lot of teams are adopting this.”

Much of the shift has happened for the same reasons it’s happened in the pros — mathematically it makes more sense to shoot a lot of threes than a lot of twos. Newburyport coach David Clay said he and his staff have extensively studied the top offenses in the professional and college ranks, both men’s and women’s, in hopes of making their offense as efficient as possible.

“Our theory is that we either want a lay-up, a three, or a foul shot,” said Clay, who took trips to Army West Point and St. Joseph’s in Maine last offseason to study their offensive systems. “Those three things yield the highest points per possession, where the midrange jump shot is dying because it doesn’t yield more than one point per possession.”

The fruits of Newburyport’s offensive approach have bloomed this winter. So far the Clippers are averaging 71.5 points per game on 9.8 threes, helping power Newburyport to a 13-4 record and a second consecutive CAL Kinney Division title. Jacob Robertson (59 threes) will have a chance to break Nick Rogers’ single-season 3-point record (80), and Parker McLaren has seen his shooting improve dramatically, making 43 threes this year after knocking down a combined 19 during his sophomore and junior years.

The approach has also helped maximize the talents of players like McLaren and his older brother Casey, Newburyport’s all-time leader in points (1,340) and threes (181). At over 6-foot-5, both fit the physical profile of a high school big man and would have likely done most of their damage in the paint years ago. Instead, they’ve thrived as versatile, modern players who have adapted their games to be as efficient as possible without having to constantly grind for low percentage shots in the paint.

“In a midrange jump shot your shot is usually contested, and some post moves, if you don’t have an automatic player, the percentage is so low because they have a hand in their face,” Clay said, expanding on the disadvantages of midrange shots. “Then the corner three has become such a highly valued shot, not because it’s closer but because it’s usually forces a longer close out.”

The increased emphasis on 3-point shooting isn’t exclusively a tactical decision, it’s also a reflection of the talent coming up through the youth ranks these days. Today’s players have grown up watching and emulating players like Steph Curry and James Harden, and their youth coaches have emphasized 3-point shooting to help prepare them for the modern game.

Needless to say, if you’re Georgetown and you have a roster short on size but full of lights out shooters like Harrison Lien, Jack Lucido and JT Murphy, why wouldn’t you try to shoot as many threes as possible?

“I don’t think we’d play this style if we didn’t have the shooters that we have,” Keilty said. “I feel lucky to be able to coach this group, because if you look at their percentages, they’re all shooting over 30%.”

The rise in 3-point shooting isn’t necessarily universal, and on the girls side the trend has been almost the opposite locally. This year the girls have only made 218 threes so far, well short of the pace needed to match the 350 made threes last year or the 433 from 2017-18, and yet the Pentucket, Amesbury and Newburyport girls all rank among the best teams in the CAL and beyond.

Still, the 3-point revolution hasn’t shown any signs of slowing down at the professional ranks, which means this winter is likely just the beginning of bigger changes to come.