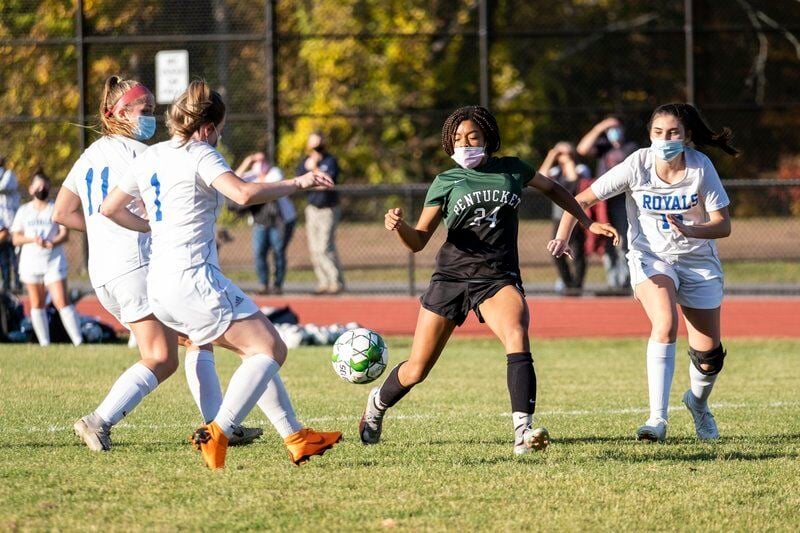 RYAN MCBRIDE/Staff photoPentucket's Sabrina Campbell attempts a shot in traffic against a series of Georgetown defenders. 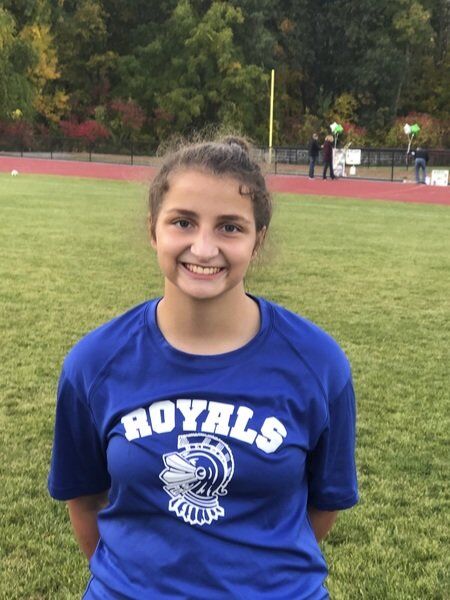 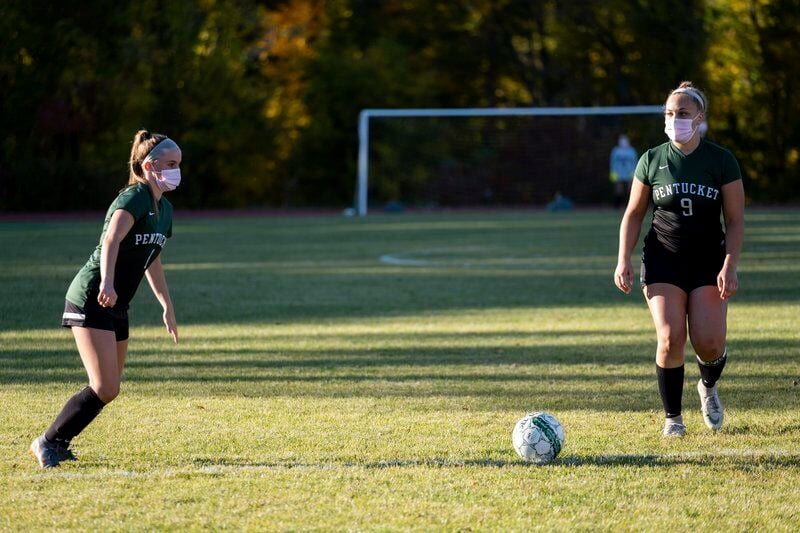 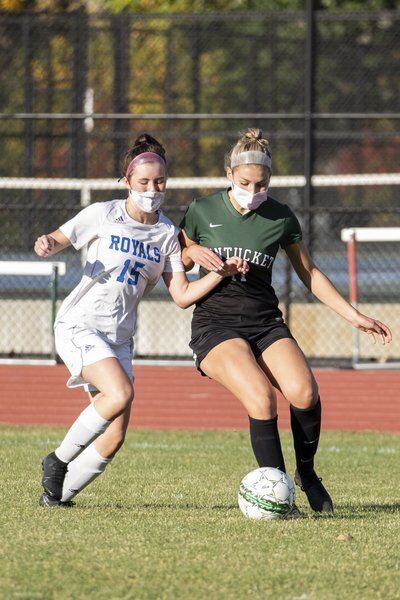 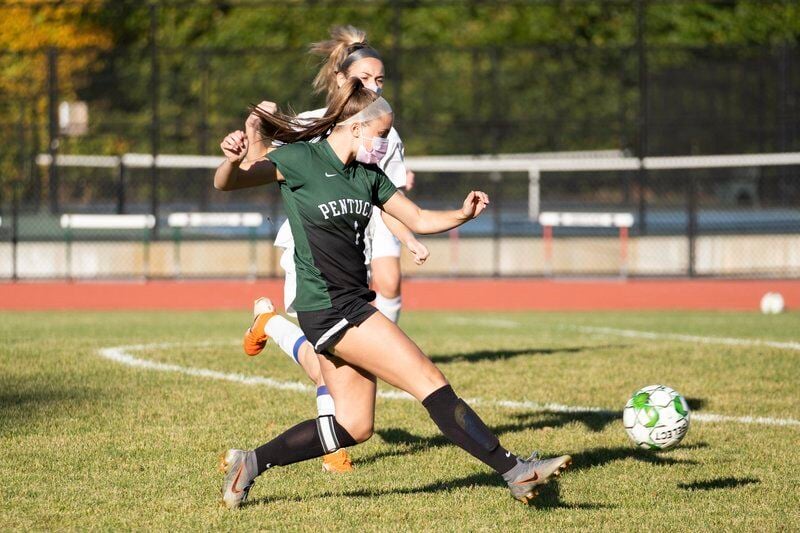 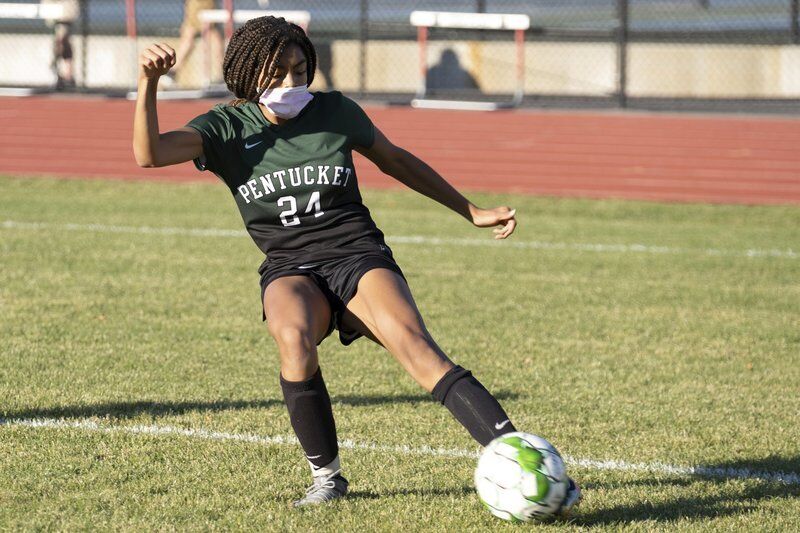 RYAN MCBRIDE/Staff photoPentucket's Sabrina Campbell attempts a shot in traffic against a series of Georgetown defenders.

GROVELAND — Georgetown girls soccer had already lost its starting varsity and JV goalies to injury. Then, during warmups prior to Wednesday’s game against Pentucket, the team’s emergency goalie seriously jammed her finger and couldn’t play in net either.

With her team in a bind, junior midfielder Casey Mahoney volunteered to play goalie. She did so despite having essentially no experience at the position and while knowing that she’d be facing arguably the most explosive offensive team in the Cape Ann League.

“It was nerve wracking for sure,” Mahoney said.

Somehow, someway, Mahoney and the Royals held their own, pulling out one of the most stunning results in the league this season.

Georgetown played Pentucket to a 1-1 tie, leading for most of the game before hanging on for dear life in the final minutes. Mahoney finished with 11 saves, including a handful of tough stops late, and while she caught some incredible breaks after four Pentucket shots bounced off the crossbar, she also benefitted from a fantastic performance by the Georgetown defense.

“I’m so, so, so proud of them, the effort defensively was spectacular,” said acting Georgetown coach Kevin Fair. “I have to call out Rylie Lasquade, best game I’ve ever seen her play in her high school career. Same thing with Rebecca Doucette, just beautiful marking, great decision making, just really proud of the girls.”

Georgetown senior Talia Geberth gave her team the lead in the 8th minute, scoring on a breakaway after corralling a beautiful thru-ball by Elle Schneider. The play was one of the few good scoring opportunities Georgetown ever got, but even though Pentucket consistently maintained possession, the Green and White struggled to finish.

That’s not to say there weren’t opportunities. Late in the second quarter sophomore Sabrina Campbell put a bouncing shot on net that almost ate Mahoney alive. She was able to block it just enough to keep from crossing the goal line, and just close enough that she was able to dive on the rebound before any other Pentucket forwards could finish the play.

After halftime Pentucket continued to press, with two particularly juicy opportunities bouncing off the crossbar. Finally in the 70th minute, Mackenzie Currie got an open look and delivered a perfect strike up high to tie the game at 1-1.

From that point on, the Green and White all but threw the kitchen sink at the Royals.

Pentucket had dozens of scoring opportunities in the final minutes, with electric defender Syeira Campbell wreaking havoc whenever she made a run upfield. Those usually resulted in either a long shot on goal or a dish to Currie, Jacey Jennings or one of Pentucket’s other top goal scorers, but for the most part Georgetown’s defense was able to keep a body in front to prevent the shots from getting all the way through to the net.

Pentucket’s push was also hampered by the frequent stoppages in play accompanying every re-start, a consequence of the new COVID-19 protocols that require the ref’s whistle before a kick-in or free kick can be taken.

“What we’ve all got to get used to is these stoppages, the game stops all the time and you can’t do quick resets,” said Pentucket coach Dan Millard. “So when you’re trying to get momentum it’s hard to do that right now.”

Pentucket and Georgetown were each playing only their second games of the year after both programs shut down for nearly a week for precautionary reasons. Millard said he felt both teams played well even though the lack of practice time was evident, and that after whipping Triton for a 10-0 win in their season opener, Wednesday’s result was a good reminder that they’ll need to bring their A game to achieve their goals this season.