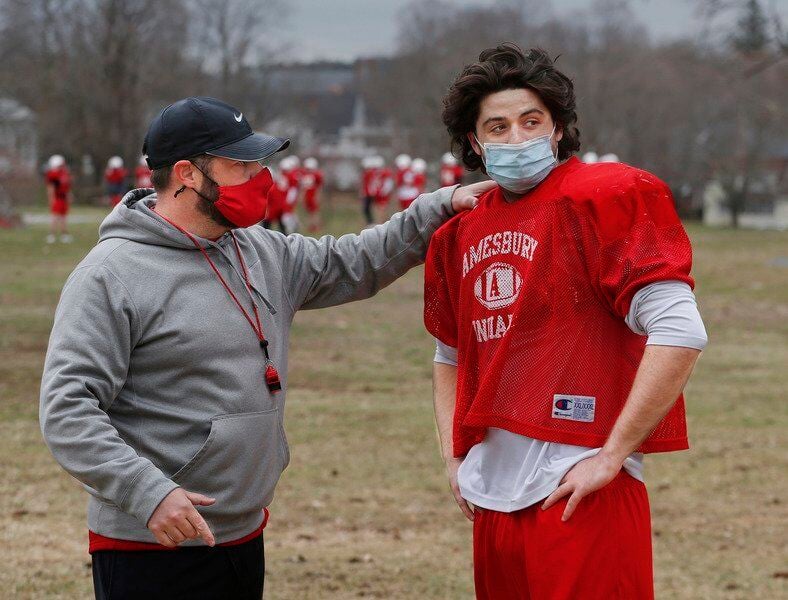 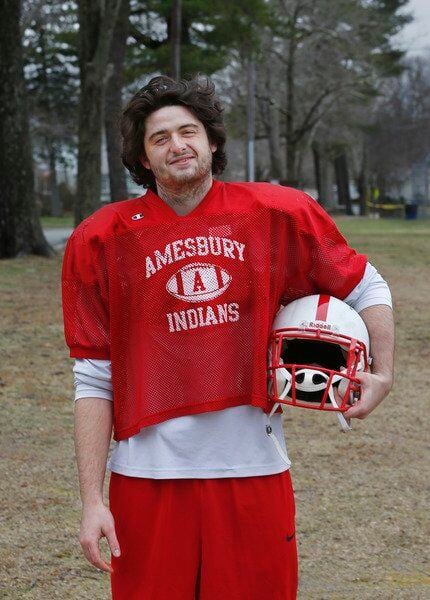 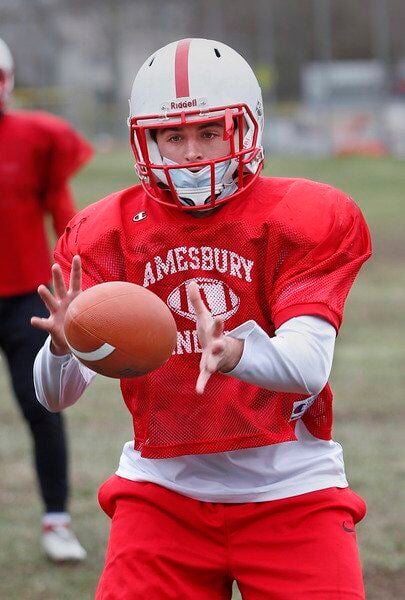 AMESBURY — One of the most common clichés in sports is that football teams are like a family, but for Jarrid Schwindt the Amesbury football team has been so much more.

Through football the Amesbury senior has found refuge, both through the shared goals and sense of purpose the sport provides and in a very literal sense through the teammates and coaches who welcomed him into their homes at his greatest hour of need.

"I've never coached a guy, nor seen or met a guy, who has been so strong in the face of adversity," said Amesbury coach Colin McQueen. "He's a special kid and he really inspires me in the way he shows up and battles through that stuff and is the epitome of the no-excuse guy.

"When you look at what he's been through, it's shocking and awe inspiring," he said.

Heading into the 2019 season, Amesbury football was coming off a breakthrough 9-2 season and a Division 5 North finals appearance. Then a junior, Schwindt was entering his second year as a starter at offensive guard and defensive tackle who was expected to play a big role once again. But amid all of that optimism, things weren't going smoothly back at home.

Eventually, a family situation arose that resulted in child protective services having to separate Schwindt from his parents. As a result, he was nearly placed into foster care, which could have resulted in him moving out of town and transferring to a new school.

Rather than allow that to happen, teammate Kyle Donovan, his dad, assistant coach Kevin Donovan, and their family opened their doors to Schwindt and allowed him to live with them.

"It meant a lot for them to support me and be behind me, they felt like a second family," Schwindt said. "The support was great at the time, and it meant a lot. Throughout the whole time period, I could feel the support from my coaches and teammates that knew about it."

Schwindt ultimately spent eight months with the Donovans, as well as with fellow teammate Casey Birdsall, until his home situation was resolved and he was able to reunite with his parents. In the meantime, Schwindt remained a key part of the Amesbury football team, helping lead the Indians back to the Division 5 North finals again, this time as an underdog No. 7 seed.

But as bad as all of that was on its own, Schwindt also had to overcome a serious knee injury on top of everything else.

In Amesbury's season finale against Newburyport, Schwindt suffered a torn ACL trying to make a tackle in his team's 34-20 Thanksgiving Day loss. He didn't initially realize the injury was that serious, so when basketball season began he played the entire preseason on the bad knee. He wound up playing the regular season opener, scoring five points in a win over eventual CAL Baker champion Hamilton-Wenham, but after that he knew something was wrong and an MRI confirmed the ACL tear.

"It was a nice reminder that I'm human and stuff is going to happen," Schwindt said.

Schwindt spent the summer rehabbing his knee, and because football was postponed to the Fall 2 season he wound up having nearly six extra months to recover. He says his knee feels great now, and since the season began he has again emerged as a stalwart in the trenches, helping lead Amesbury to a 2-1 start to the season.

Now a senior, Schwindt has also embraced his role as one of the team's leaders, and is working to help set the underclassmen up for success the same way the 2019 team's seniors once did for him.

"It was nice to learn under them, figure out the system and junior year really started to get an understanding of everything, with the coaches staying on me, keeping me honest, keeping me consistent," Schwindt said. "This year it's just executing, doing what we have to do, and be that leader that those guys were to me when I was a sophomore."

This season hasn't been without its curveballs. Schwindt suffered a concussion late in Amesbury's opening night loss to Ipswich and wound up missing the following week's game against Hamilton-Wenham. Despite that, McQueen said Schwindt played a key role in prepping his back-up so the Indians wouldn't skip a beat until his eventual return last weekend against Manchester Essex.

"He was in his hip pocket all week," McQueen said. "Having a guy like that is always special and he's been an absolute pleasure to coach, a very special guy and we're incredibly lucky to have him."

Once the season is done, Schwindt's athletic career will probably be over. Following graduation he plans on attending a trade school or Northern Essex Community College, so college football likely won't be in the cards. With that being the case, if these last few weeks are it, he said he hopes to make them the best they can possibly be.

"I have to stay as healthy as I possibly can and give it my all," Schwindt said. "I have four games left, this is the rest of my football career so I have to give it 100%."