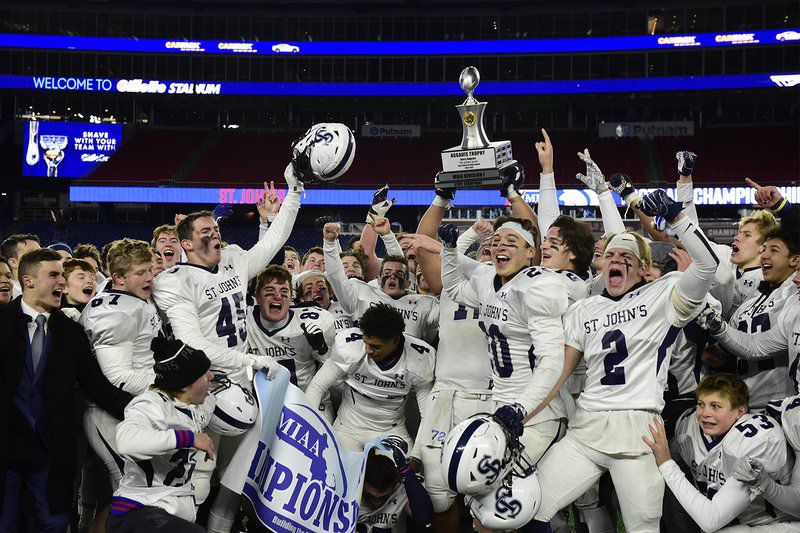 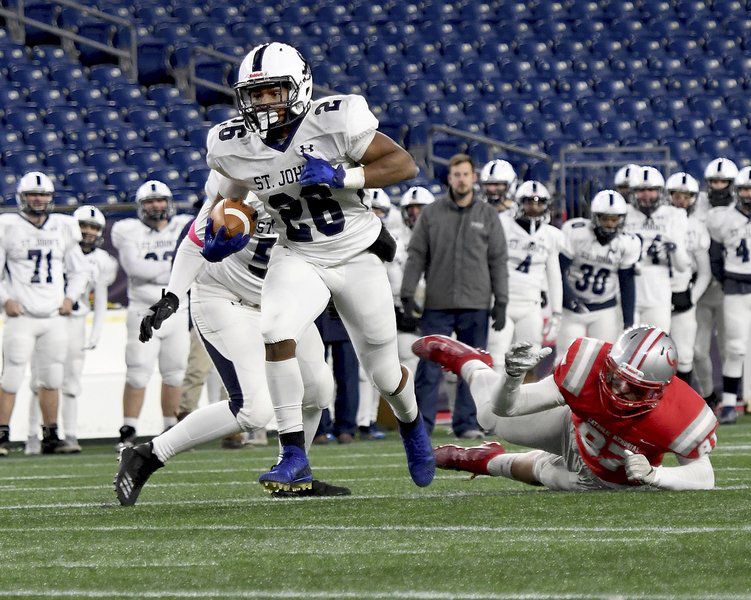 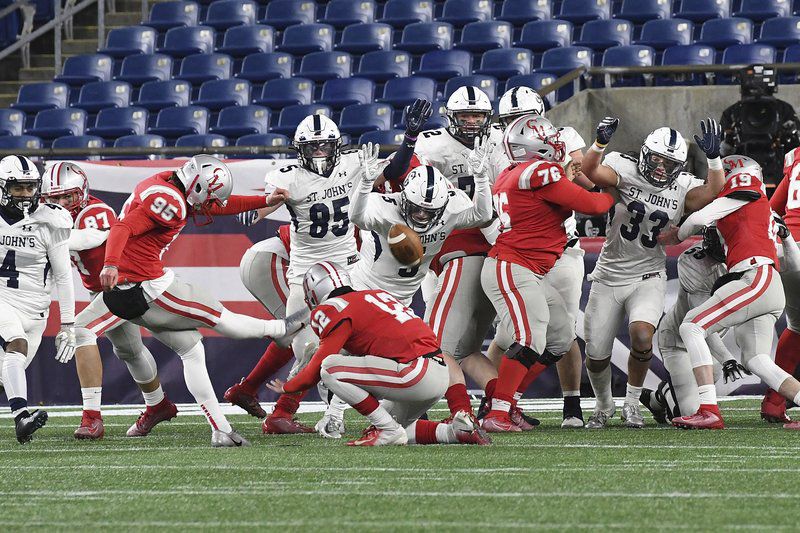 FOXBOROUGH — St. John’s Prep has had some loaded football teams over the last 30 years.

The Eagles have fielded too many future Division 1 players to count. They’ve had boys that went on to play in the National Football League, some that turned pro in other sports and numerous alumni that have taken part in New Year’s Day college bowl games.

None of them can say they what did Matt Crowley, Matt Duchemin, Mason Davis, Cooper Smith, Pat Nistl, Collin Taylor and Anthony Fagan did on Saturday night.

Their fingerprints were all over Saturday night’s 21-14 win over Catholic Memorial at Gillette Stadium, where St. John’s (11-1) won back-to-back Division 1 titles for the first time in the football program’s storied history.

“I’m so proud of them. To win it on the field back-to-back years, it’s never been done at St. John’s,” said head coach Brian St. Pierre, who knows how hard it is to win Super Bowls as a player since he quarterbacked the Eagles to the 1997 crown.

“These guys have etched their names in stone. I’m so proud of them.”

Division 1 football is the pinnacle of the high school game in Massachusetts, the place where the toughest and biggest programs tangle. It’s exceedingly difficult to repeat as Super Bowl champs: Since 1972, St. John’s is now the sixth school to scale the mountain two straight years, joining Xaverian, Brockton, Everett, Natick and New Bedford.

“He’s the best coach in the state. The guys rally around him, they trust him. He’s built a culture that’s unmatched by any team I’ve ever seen or been a part of,” said Crowley, the only Prep QB to win two championships and one of only two Salem News area signal callers to ever to go to two D1 Super Bowls.

It was that culture that enabled these Eagles to reload after the 2018 champs were gutted by graduation. The Prep leaned on its leaders — record-setting QB Crowley on offense, blanketing cover corner Duchemin in the secondary, imposing pass rusher Taylor on the front seven and twin behemoths Davis and Smith on both lines.

“I don’t think many people thought we were going to win again,” St. Pierre said. “We knew. We knew we had a lot to build around.”

Six of the seven returning starters were among the Prep’s 24 seniors. Duchemin was perhaps the best two-way player in the state and showed it on Super Saturday: He had two interceptions and made CM’s passing game almost an after thought while adding 119 receiving yards and the title-clinching TD on a 32-yard bomb from Crowley.

The Prep controlled the trenches to up-end the Knights and avenge their only loss of the year. Davis and Smith held their ground at the point of attack all night.

“It says that they’re tough, hard-nosed football players,” St. Pierre said of his line. “They’re better people. They play with tremendous character and guts. A lot of guys play both ways. We’re thin, but we’re tough.”

This title was as much a credit to the new faces as it was to the old reliables. So many seniors that didn’t play a lot a year ago made their presence felt on the turf at Gillette: Senior Theo Hutt had a number of great blocks as young buck James Guy chewed up yardage.

Middle linebacker Nick Baldini, arguably the Prep’s most improved player from last year, had a fumble recovery. Senior Tripp Clark, a Byfield resident, made two big tackles while wearing the No. 33, which seemed appropriate since the new Super Bowl trophy is named after No. 33 Harry Agganis.

Senior defensive end Mike Fionda forced an early fumble to stop CM from scoring, the second of seven combined turnovers in a game that at times felt like a tractor pull.

That style sort of fits the identity St. Pierre has aimed to mold in his six seasons in charge. He’s a demanding coach: A fact that reveals character and has built the Eagles into one of the state’s tougher, more resilient clubs.

“We work them hard. We ask a lot, in season, out of season, weight room, running. They work hard and they earn everything they get,” St. Pierre said.

There’s nothing more satisfying for a football coach than seeing the guy who went all out at every lift, spent extra time watching film and loves the game earn a starting job and succeed. This St. John’s Prep team was full of kids that fit that bill.

“We had a lot of new starters and young guys starting,” said Crowley, who couldn’t comprehend his place in Prep football history as the first, and so far only, two-time Super Bowl champ under center. “I haven’t even thought about that. It’s sort of surreal.”

What about the road to a three-peat? It’s only been done once in Division 1, by CM coach DiBiaso when he was in Everett (2001-03). The Eagles are again losing a ton to graduation — but they have Guy, Taylor, two-way starter Joenel Aguero, receiver Jackson Delaney and corner Matt Mitchell to build around.

There will be holes due to graduation, too. There always are. If the 2020 team follows the DNA of the 2019 group that was determined to out-work the opposition and prove there were capable players ready to step up, the Eagles will have chance to write some more history.

Make no mistake, the seven guys that started on both the ‘18 and ‘19 state champs were the Prep’s backbone. The difference between repeating and not repeating, Saturday night and all season, was the belief and work that went into earning jobs for the other dozen-or-so Eagle regulars.

It’s also the difference between talent and toughness. Talent can take you to a Super Bowl, and maybe even win one. Toughness will take you back and let you stack up ring after ring.

“I’m really proud of these guys,” St. Pierre said. “They gutted it out. They were the tougher team.”