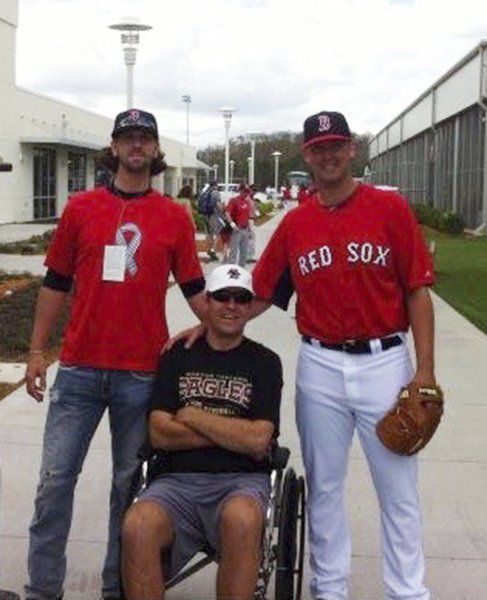 Courtesy PhotoPete Frates poses with a couple of his former Boston College teammates, including Salem, N.H.'s Terry Doyle, right, who played in the minors for the Red Sox, and Adam Crabtree, who was a former star at Phillips Academy in Andover. 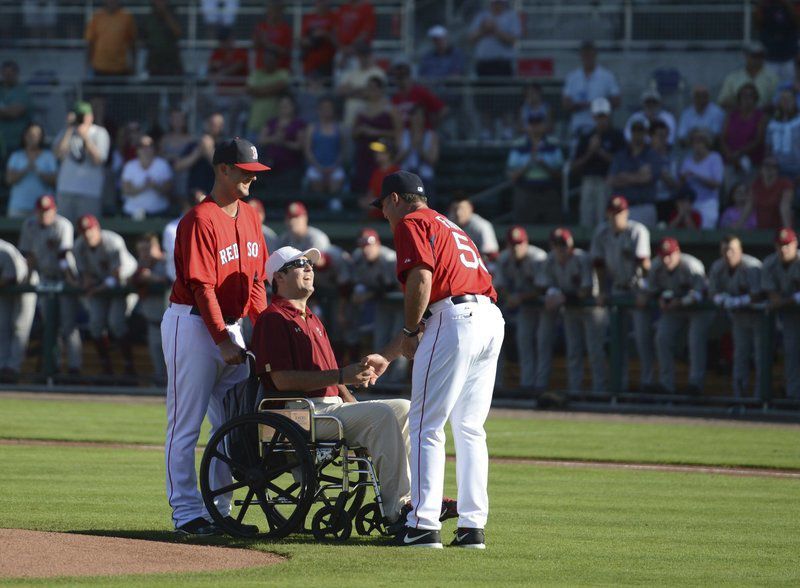 (Photo by Michael Ivins/Boston Red Sox) Terry Doyle, left, a Salem, N.H., native, stands behind Pete Frates while then-Sox manager John Farrell congratulates him before an exhibition game in 2013. Doyle and Frates were teammates at Boston College for three years.

Courtesy PhotoPete Frates poses with a couple of his former Boston College teammates, including Salem, N.H.'s Terry Doyle, right, who played in the minors for the Red Sox, and Adam Crabtree, who was a former star at Phillips Academy in Andover.

(Photo by Michael Ivins/Boston Red Sox) Terry Doyle, left, a Salem, N.H., native, stands behind Pete Frates while then-Sox manager John Farrell congratulates him before an exhibition game in 2013. Doyle and Frates were teammates at Boston College for three years.

Terry Doyle was being a good alum back in February 2013.

Then a Triple-A pitcher in the Red Sox organization, he was asked to speak to the Boston College baseball team before its annual tilt with the Sox in a spring training game in Fort Myers, Florida. He was telling the young players to “enjoy the moment,” “be yourself,” “stay loose” and “don’t be afraid.”

Finally, Doyle mentioned to the team not to dig in if they faced him because that’s his plate and he wouldn't be scared of hitting them.

Then came a voice from the back of the room.

It was Pete Frates, then in a wheelchair, joking about Doyle’s fastball.

The room filled with laughter.

Doyle and Frates had history. They played three years together at B.C., with Frates a year older.

“That was Pete,” said Doyle. “He always had something to say. Always. Every room he was in was his room. He owned. He had the personality.”

Frates died Monday from complications of amytrophic lateral sclerosis, or ALS. A funeral Mass was scheduled for Friday.

Doyle, who retired from baseball in 2017 and is in his second season as head coach at New England College in Henniker, New Hampshire, got an understanding of who Frates was the summer after he graduated from Salem (N.H.) High School in 2005.

They were facing each other in the North Shore League.

“It was classic Pete,” recalled Doyle. “He wasn’t afraid of anything. He just introduced himself. I remembered feeling like we'd already become friends. That was Pete in a nutshell.”

As a teammate, Frates was one of those “grinders" with a dirty uniform from diving for balls and stealing bases.

“He became a full-time starter his junior and senior seasons,” said Doyle. “He could run, throw and hit for a little power. For me, as a pitcher, he played center field and always got good jumps on balls in the gap. He saved a lot of hits when I pitched.”

Frates averaged .243 at the plate with five homers and 26 RBI over his last two seasons, which were almost identical.

Doyle was there, playing the University of Maryland, when Frates had maybe the greatest baseball game of his career. He had a grand slam, three-run homer, RBI double and line-drive single.

“I always thought he hit three homers that day, but the double, I believe, was a wall scraper,” said Doyle. “We were going crazy for him. He was a senior. He had a lot more power than his stats showed.”

After college, Frates and Doyle went their separate ways. Doyle played pro baseball. Frates stayed connected to BC after graduation.

“The first couple of years after we were finished, his family always had a tailgate for the football games,” said Doyle. “We always had a lot of laughs and fun there. His family was very close.

“And then if there was a BC baseball event near the campus, Pete always showed up,” he said. “He had a quick wit and always was the most popular guy in the room.”

As ALS struck his friend in the 2011, Doyle noticed that Frates wasn’t going anywhere quietly.

“I always thought Pete was destined to be great,” he said. “He had that confidence and energy. I just didn’t know what it would be for.

“Then it became fighting ALS, and his family was aboard with him,” said Doyle. “It was never ‘Why me?’ Never.

"Then I realized Pete had found his passion. And he brought the understanding of ALS to the rest of the world. For me, Pete will always be my friend.”

Bill Burt is executive sports editor of The Eagle-Tribune. Email him at bburt@eagletribune.com.

A funeral Mass for Frates will be celebrated today, Dec. 13, at St. Ignatius Church, Chestnut Hill, next to the Boston College campus. A celebration of Frates' life will be held at St. John's Prep on Monday from 4 to 8 p.m. in the Mahoney Wellness Center.