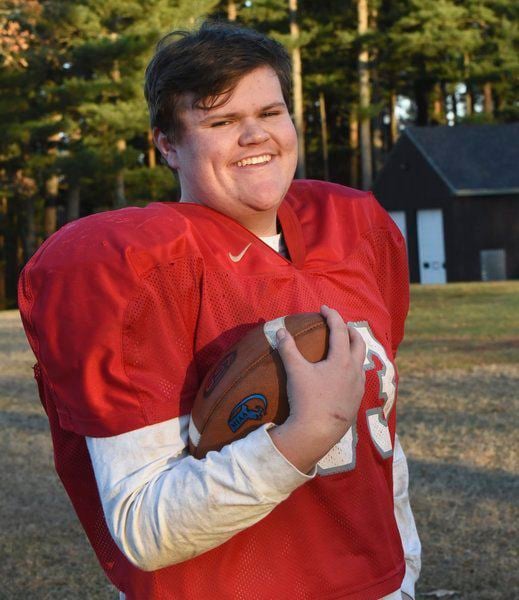 BRYAN EATON/Staff photoThomas Flanagan has been the heart and soul of the Amesbury football program for the past three years. Now the senior lineman is gearing up for one last shot at Newburyport in hopes of wrapping up his stellar career on a high note. 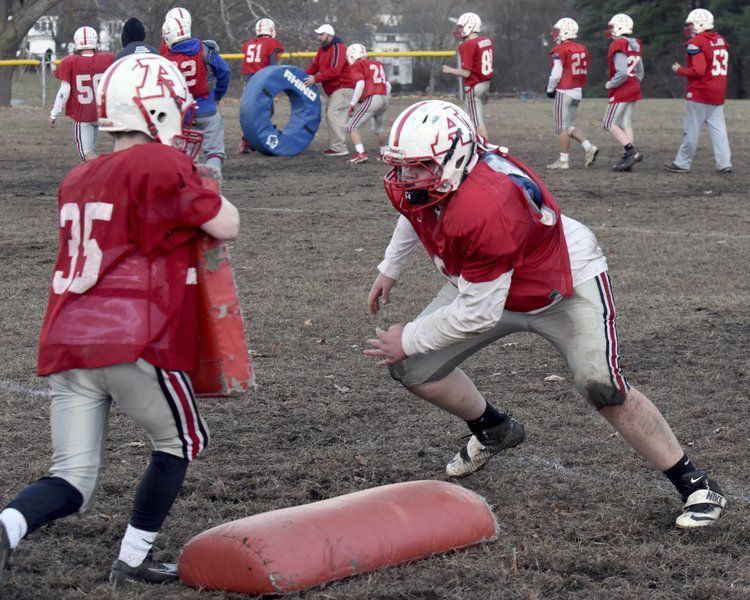 BRYAN EATON/Staff photoAmesbury senior Thomas Flanagan is a two-way starting lineman who has been a starter since his sophomore year.

BRYAN EATON/Staff photoThomas Flanagan has been the heart and soul of the Amesbury football program for the past three years. Now the senior lineman is gearing up for one last shot at Newburyport in hopes of wrapping up his stellar career on a high note.

BRYAN EATON/Staff photoAmesbury senior Thomas Flanagan is a two-way starting lineman who has been a starter since his sophomore year.

AMESBURY — When Thomas Flanagan unexpectedly lost his dad, Brian, in the summer of 2017, his Amesbury High football team and the entire community rallied for him, his mom Mary Ellen and big brother, Tim.

They owed this kid that much and they delivered big-time.

Thursday morning at Newburyport High School, Flanagan will take all the emotion, all that energy and all that love he has for the folks who have stood behind him for so long now and sprint on to the turf one final time. His heart will race, his stomach will churn, a tear or three may well up, and he will be where he is most comfortable, battling alongside side his Amesbury teammates against their most fierce rival, Newburyport, in the traditional Thanksgiving battle.

“I’m so excited, but I just can’t imagine life without this,” said the Amesbury co-captain, a two-way starting tackle. “Everyone on this team has so much fight. They love this team, and they love each other. I just love this team environment. The guys you play football will in high school will be there forever.”

Most likely, this is the final football game for the 6-foot, 240-pounder. A National Honor Society student, he is looking at colleges like UMass Amherst, UMass Lowell and UNH and college ball is not in the cards.

His impact at Amesbury High will remain, though. Flanagan, simply put, is not your average, run-of-the-mill three-year starter.

“We’re going to miss him certainly,” said McQueen. “His impact is one that will stay with the program for a long time. Every moment with that kid around has been a joy.

“We’ve seen him through the years as one of the most celebrated student athletes in the school. That’s pretty rare for a lineman. It comes from his charisma, just the way people are around him respect and love him. He is like a member of everything, involved in student council and all types of things. People just love him. I’ve never seen a kid so loved by so many of his peers.”

The feeling, of course, is mutual.

“I get involved in a lot of things, because of how much I love Amesbury,” said Flanagan, who also plays on the Indians’ baseball team in the spring. “I love the community here. It’s a place where everybody looks out for each other.”

Flanagan found that out for sure under the worst circumstances when his dad passed.

At first, he found incredible strength at home.

“My mom is amazing,” he said. “She’s just one of the strongest people I know and got us through the hardest times.

“It was so tough, but my dad was just an awesome guy. We all wanted to (stay strong and persevere) for him. I think about that, and I think about him a lot, especially at times like this with Thanksgiving.”

Introduced to baseball at around age 4 by Brian, who would later serve as the Amesbury Little League president, Thomas found football to his liking by the third grade.

“He was always so supportive of us,” Thomas said.

Flanagan played both sports all the way through and impacted on the varsity football field at Amesbury earlier than most people would have ever thought.

“As a sophomore, he started at left tackle pretty much by default,” said McQueen. “We didn’t have much size, and we needed his size. He wasn’t ready for it, but we needed him and he stepped up.”

Big time. In fact, while the Indians went 2-9, Flanagan carved out a spot on that offensive line that he would never relinquish, even as the program rose to great heights, reaching back-to-back North sectional championship games.

Much of that sophomore season was a blur, but Thanksgiving of 2017 was etched in Flanagan’s mind, and the mind of many Indians, for good.

It wasn’t just that Newburyport prevailed, 27-0. It was the way the Indians perceived the Clippers went about it.

“It definitely was not the best day,” said Flanagan. “We didn’t perform as well as I thought we could and I was upset about that.”

According to McQueen, the onside kick up 27-0, the fake punt in the second half and the passing on Newburyport High’s final offensive series certainly added gas to a fire that already burns like an old steel furnace.

“We remember that,” said McQueen. “It fuels our guys.”

Right now, he’s 1-1 against the Clippers. The difference between a win or loss is immeasurable in his eyes.

At times Thursday, he’ll catch himself staring into the visitors’ section at World War Memorial Stadium.

Perhaps he’ll wonder where his dad might have been sitting on this day. He will be right there with him, though, in the heart of the battle.

“I’ll be thinking of him,” said Thomas. “This fuel that I definitely have in me … it’s from him.