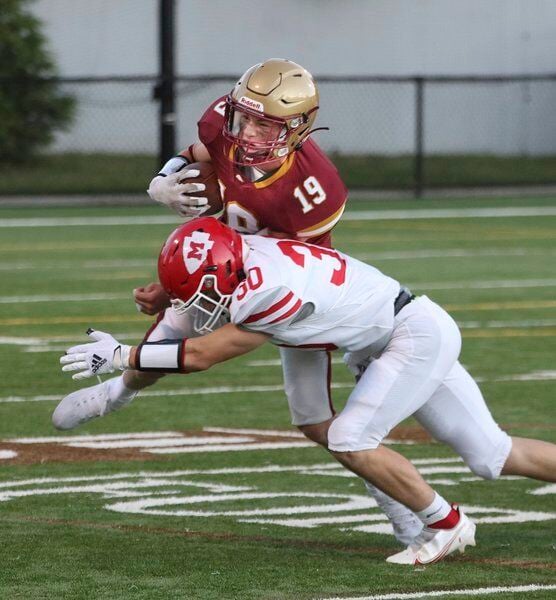 Newburyport wide receiver Lucas Stallard is stopped by Will Shannon of Masconomet during varsity football action Friday in Newburyport. 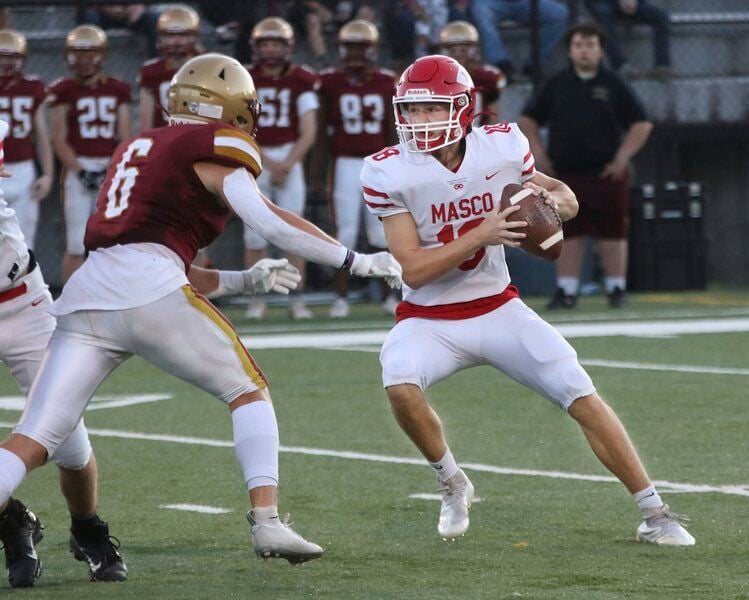 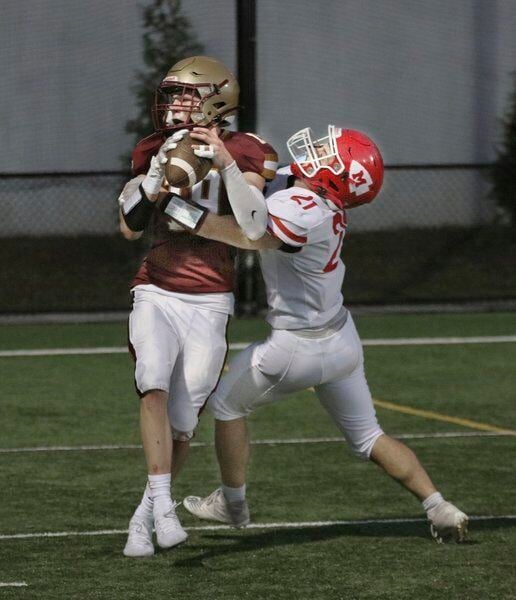 Newburyport wide receiver Lucas Stallard catches the ball at the three-yard-line before being pushed out of bounds by Zack Grande of Masconomet during varsity football action Friday in Newburyport.

Newburyport wide receiver Lucas Stallard is stopped by Will Shannon of Masconomet during varsity football action Friday in Newburyport.

Newburyport wide receiver Lucas Stallard catches the ball at the three-yard-line before being pushed out of bounds by Zack Grande of Masconomet during varsity football action Friday in Newburyport.

NEWBURYPORT — If Friday night was any indication, there’s going to be no quit in this fall’s Newburyport football team.

Trailing by two scores to a hard-hitting Masconomet team with less than five minutes left, the Clippers forced a turnover-on-downs deep in their territory to keep their slim comeback hopes alive. Out jogged senior quarterback Finn Sullivan, who had gone out with an apparent knee injury on his team’s previous drive, to the huddle.

There was no way he wasn’t going to finish the game.

He connected with sophomore Iyobosa Osazuwa for a 26-yard gain, then watched as senior Jack Hadden rushed for 18 more yards to push Newburyport to the opposing 33-yard-line. But on a fourth-and-2, the Clippers fumbled trying to stretch past the line for a first down, and Masconomet was able to recover and run out a season-opening 26-14 victory.

“We gassed out there in the end.”

The Chieftains leaned heavily on junior dual-threat quarterback Matt Richardson and the brother running back tandem of Mat and Sam Nadworny on offense.

A 14-14 game at halftime, Masconomet received the second-half kickoff and didn’t look back. Richardson hit senior Mat Nadworny for a 24-yard gain to spark the drive, and five plays later the QB kept it himself for an 11-yard TD run. The Clippers used a 35-yard completion from Sullivan to Osazuwa to spark the ensuing drive, but the Chieftans forced a fumble and drove 71 yards on three plays to score on a Mat Nadworny 11-yard rush.

That made it 26-14 late in the third quarter, and Newburyport’s ensuing drive ended with a punt after Sullivan’s injury.

“I think our depth really helped us tonight,” said Masconomet coach Gavin Monagle. “We played a lot of kids in the first half to tell you the truth, so that was a luxury that we had and I think it paid dividends as the game went along.

“But (the Nadworny brothers) are as tough as nails. Matty, our quarterback, he played great as well. He made some big plays for us.”

“I just think that they’re stronger than us and they pushed us around,” said Smolski.

The Chieftains defensive line of Corin Aylwin, Jake Kalapinsky, Alban LaVita, Jeff Pappalardo and Tyler McMahon were surrounding Sullivan all night, and didn’t give any breathing room to the Newburyport backs.

“We figured things out as the game went along,” said Monagle. “It was a good start for us.”

Masconomet struck first midway through the first quarter when Richardson hit Owen Barrett on a 25-yard strike, but Newburyport struck right back when Sullivan hit Stallard on a 20-yard screen that the senior took to the house. An 8-6 game after the opening scores, the Chieftains reclaimed the lead on Mat Nadworny’s first TD of the night — a 5-yard burst up the middle — to go up 14-8 after a successful conversion.

But, again, the Clippers responded on their next drive when Sullivan hit Stallard for a 12-yard strike on third-and-goal.

Stallard finished with five catches for 87 yards and the pair of scores.

Newburyport will be at Bedford next Friday at 7 p.m.

“We’re going to get back here tomorrow morning, we’re going to get all of the hurts out with a stretch and get into the film room and look to see what we need to fix,” said Smolski. “We need to compete with each other more in practice and just work at becoming more mentally and physically tougher.”

Friday night got out to a rather somber start as the Newburyport football team honored the amazing legacy of Wall of Famer Jeff Stone, who tragically passed away early last month.

The Clippers held a celebratory ceremony before the opening kickoff, and have dedicated this season to Stone’s memory.

A decorated athlete — and even better human being — Stone lettered in both football and hockey at Newburyport High before going on to star in both sports at Colgate University.