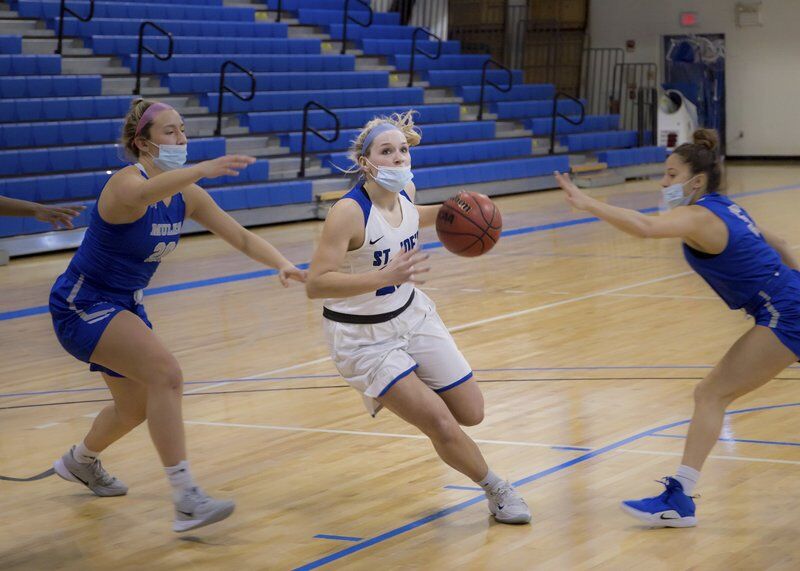 Troy Hendricks/St. Joseph's CollegeFormer Pentucket basketball great Angelica Hurley has made a big impact as a freshman at St. Joseph's College in Maine, emerging as one of the team's top scorers and rebounders in the abbreviated late-winter season. 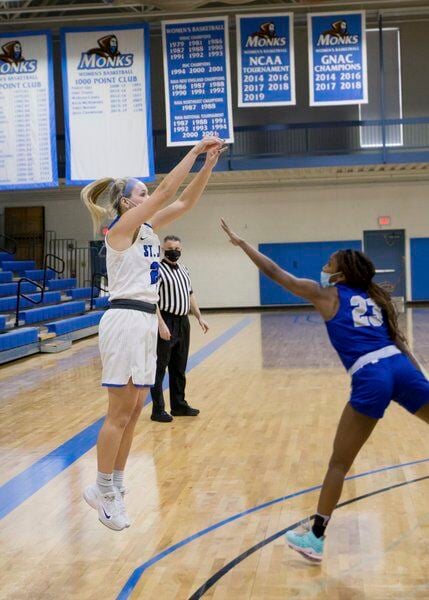 Troy Hendricks/St. Joseph's CollegeGroveland's Angelica Hurley was a state champion at Pentucket who earned CAL Kinney Player of the Year honors as a senior in 2019-20. 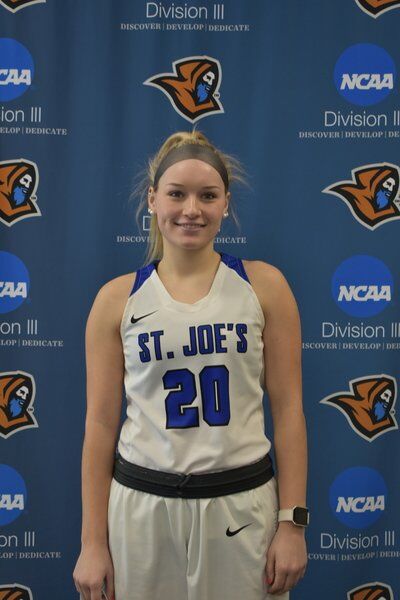 Troy Hendricks/St. Joseph's CollegeFormer Pentucket basketball great Angelica Hurley has made a big impact as a freshman at St. Joseph's College in Maine, emerging as one of the team's top scorers and rebounders in the abbreviated late-winter season.

Troy Hendricks/St. Joseph's CollegeGroveland's Angelica Hurley was a state champion at Pentucket who earned CAL Kinney Player of the Year honors as a senior in 2019-20.

Angelica Hurley had been waiting for this moment for a long time. Throughout her freshman year at St. Joseph's College in Maine, the former Pentucket girls basketball star wasn't sure if there would even be a season. Now, she was being summoned from the bench to enter the Monks' season-opener against UMaine-Augusta and finally make her college debut.

"I was like shaking at the table because I couldn't believe I was actually playing my first game," Hurley said. "Obviously I didn't want to do bad or anything, I just had to take my nerves out on defense and settle down on offense, and once I did score a few points I settled down."

She did more than settle down. Hurley went out and put on a show.

The Groveland resident was outstanding in her first college game, tallying a team-high 16 points and five rebounds in only 17 minutes in her team's 77-32 win on March 6. She hasn't shown any signs of slowing down since, and four games into the team's abbreviated six-game winter season the freshman has emerged as arguably the team's top overall player.

Hurley is currently second on the team in scoring (11.3 points per game) while shooting 45.5% from the field and 40% from 3-point range. More impressively, she is also the team's leading rebounder (7.5 rebounds) despite not being among the team's tallest players at 5-foot-8.

St. Joseph's women's basketball coach Mike McDevitt said that given Hurley's background and her performance in practice, her early success hasn't come as a surprise.

"She's a tough, aggressive player and that style of play is something she's always possessed, it certainly wasn't anything I taught her, she's had that probably since she started playing basketball," said St. Joseph's coach Mike McDevitt. "Because of that she was able to make the quick transition to the college game."

McDevitt has known about Hurley's potential for years, having originally met the former Cape Ann League Kinney MVP through his longstanding connection to Pentucket girls basketball coach John McNamara. McDevitt previously coached ex-Pentucket great Kelsi McNamara, who graduated as St. Joseph's all-time leading scorer (2,067 career points) in 2019, and over the years he regularly hosted Pentucket players at his summer team camp, where Hurley stood out from a young age.

"That's the beauty of recruiting, you may be watching a particular player at a particular time but you're always looking for either that undiscovered player or that younger player that in a couple of years might be a junior or a senior, and that was the case with Jelly," McDevitt said. "I got the chance to see Jelly play throughout the summer and knew she was one of those kids who was on our radar early. As she progressed she obviously grew into a tremendous player."

Hurley committed to St. Joseph's last year as a senior, but with the onset of the pandemic her first year wound up being thrown into flux. The team did not play any games during the fall semester and only practiced intermittently, and Hurley confessed that it was difficult not knowing if and when they would get to play.

"It was definitely tough at the beginning staying motivated to keep practicing and working hard knowing we didn't even have any games scheduled and that we probably weren't going to have any, which we were lucky enough to," Hurley said. "A lot of it was staying mentally with it to keep working hard to get better for games we didn't even know were going to happen."

Hurley and her teammates were eventually rewarded for their patience, and the former Pentucket state champion said getting to be a part of the St. Joseph's program after waiting for so long has been a great experience.

McDevitt undoubtably feels the same, and given the success of his Pentucket recruits so far it's not surprising that he'll be going to that pipeline a third time, with current Pentucket senior Mackenzie Currie set to join the Monks next year. The St. Joseph's coach was highly complimentary of Pentucket, saying the program does a great job preparing high school players for the college game and that McNamara and Hurley's fast success is proof.

"John is an excellent coach, he does a great job preparing his kids to play at the highest level, his kids always play hard, they're always aggressive, and that's kind of the mentality that you need to do well at the college level," McDevitt said. "When I get a kid from his program I know that they're coming to me with that skillset. I don't have to worry about them playing hard, they're going to play hard the first day of practice, and that's not something that every program has, and I think that's a testament to the job that John does and that's why Pentucket has been so good for all of the years he's been there."

St. Joseph's will wrap up its season this weekend with a home-and-home series against Husson, with the home date scheduled for Friday at 6 p.m. and the road finale for Sunday at 1 p.m.

When Angelica Hurley first arrived at St. Joseph's College, she was initially a bit apprehensive about meeting one of her new teammates. Jayne Howe, a sophomore guard, previously played at Pembroke High and squared off against Hurley's Pentucket team in the 2019 Division 2 state semifinals at the TD Garden. Pentucket won that game 53-38 and went on to claim the program's second state title the following weekend.

"Me and Jayne have actually talked about it many times and we think it's really funny now," Hurley said. "I remember coming up I was kind of nervous to meet her and talk to her at first but we're really good friends now and we always reference that."

Though Hurley can hold the result over Howe, the Pembroke star can take some positives away from the game. Not only did she get to play in the TD Garden, but she also led her team in scoring (14 points) and became her school's first-ever 1,000-point scorer that night.