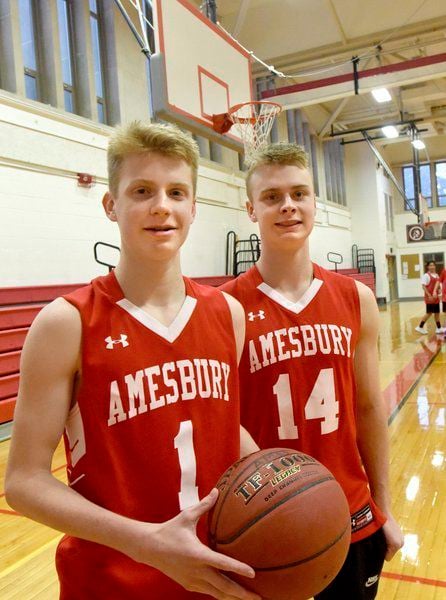 BRYAN EATON/Staff photoCam and Jaden Keliher have led a major resurgence for the Amesbury boys basketball program, which is currently enjoying one of its best starts in recent memory. 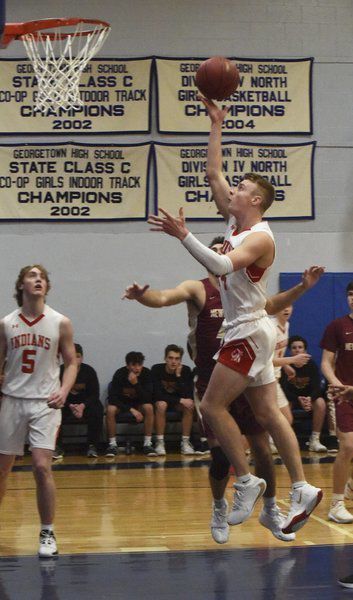 BRYAN EATON/Staff photoAmesbury’s Jaden Keliher glides to the hoop for an easy basket against Newburyport.

BRYAN EATON/Staff photoCam and Jaden Keliher have led a major resurgence for the Amesbury boys basketball program, which is currently enjoying one of its best starts in recent memory.

BRYAN EATON/Staff photoAmesbury’s Jaden Keliher glides to the hoop for an easy basket against Newburyport.

There is no motivation tactic the Amesbury High boys basketball coach could conjure that the Keliher Brothers, senior Jaden and sophomore Cam, have not already employed. And those two aren’t alone.

“Every single person on this roster, from 1-to-12, has bought in,” said Jaden. “It’s nothing new. Everyone bought in early over the summer. We had the whole summer and fall playing together. We accomplished so much.”

“You know when people were talking about Cape Ann basketball before the season, you heard about Newburyport, and they talked about Pentucket and other teams,” Jaden said. “But nobody mentioned Amesbury. That put a huge chip on our shoulders.”

Off to a 1-1 start, the Indians announced to the region, rather emphatically, that they had had enough, stunning Newburyport in the finals of the Rowinski Holiday Tournament.

Again, it was about respect.

Amesbury has hardly slowed, pushing the mark to 6-1 heading into tonight’s road war at Rockport. And both Kelihers have been right in the thick of the revitalization plan.

Riding a string of three straight 20-plus point games (four on the season), Jaden is right near the top of the area scoring list at 18.3 points a night. Meanwhile, Cam is back for the second year running the point for the Indians, and he’s scoring 13.3 a game.

Little brother has a great understanding of Comeau’s offense and the players around him. He also knows from where the fuel for this resurgence emanates.

“(Jaden) is a great leader for this team, probably the best leader we’ve seen in Amesbury in a while,” said Cam. “He scores the ball, plays great defense. He just plays so hard.”

Of course, he does. Somewhere along the way, someone probably told Jaden he couldn’t do it.

That was either a giant mistake … or sheer genius.

“(Cam and I) are not the most athletic kids out there when you see us,” Jaden said. “We have two parents that work extremely hard, and that work ethic is instilled in both of us.”

The will to succeed grows strong at the Keliher house in South Hampton.

“We’ve both put in a lot of work spring, summer and fall, in the weight room, getting shots up, working on our game,” said Jaden. “That’s the nice part about having a brother that’s fully invested too. He picks me up, maybe when I don’t want to. And vice versa.”

That attitude has spread, too, just like winning. The Indians felt the power move made by the football team this fall. They’ve fed off it.

As Jaden said, “winning is contagious, too.”

The buy-in has come at a cost, though. This fall, the Kelihers made the tough choice to stop running cross country and focus on hoops. Jaden had already won a couple of CAL team titles for coach Ernie Bissaillon, and Cam was the top runner on the squad as a freshman.

But basketball took precedence this time around, what with Jaden making a push to play in college – he’s looking at Emmanuel and Wheaton among others.

Cam, meanwhile, has picked up right where he left off a year ago.

“I love to see it, he puts his time in, works at it. He deserves everything he gets,” said Jaden.

The younger brother had the reputation coming in, but he never let that sidetrack him.

“I knew last year I could do it,” he said. “I was happy with the opportunity, but I knew I could do it. It was a great experience.”

If folks around the Cape Ann League were expecting this bunch to ease off on the accelerator and hit cruise, forget it.

Hoops means too much to these two, who’ve been in the program since Day 1.

“We lost to Manchester by two late last year and that cost us the tournament,” Cam said.