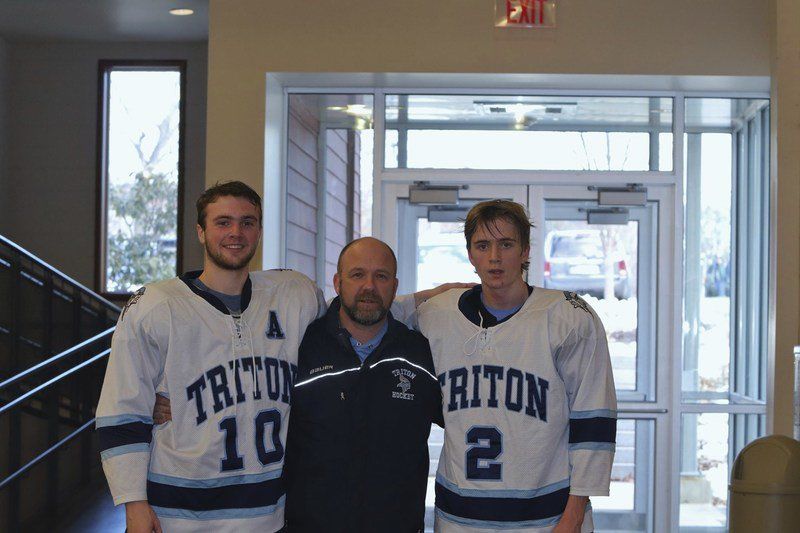 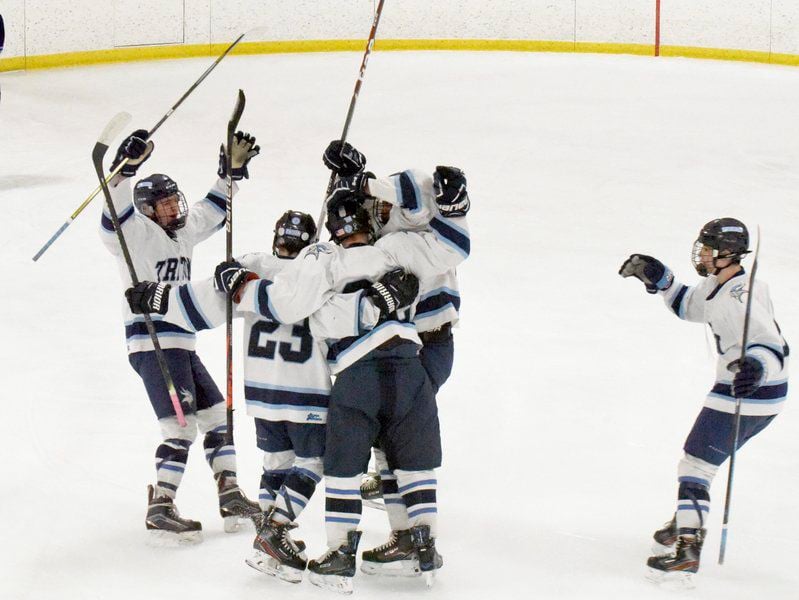 BRYAN EATON/Staff photoThe Triton hockey team celebrates a goal during its Division 2 North quarterfinal game against Wilmington. The Vikings would make it all the way to the sectional final for the first time since 1990. 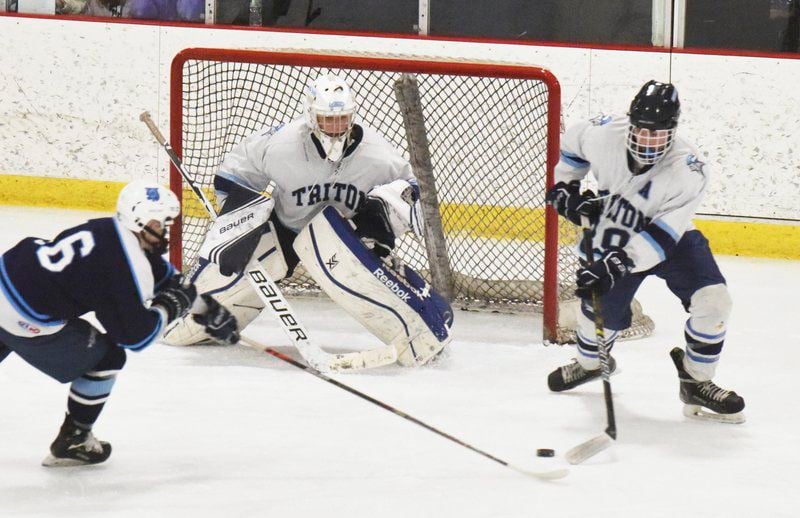 BRYAN EATON/Staff photoTriton defenseman Connor Kohan carries the puck up the ice during the Division 2 North quarterfinal against Wilmington. 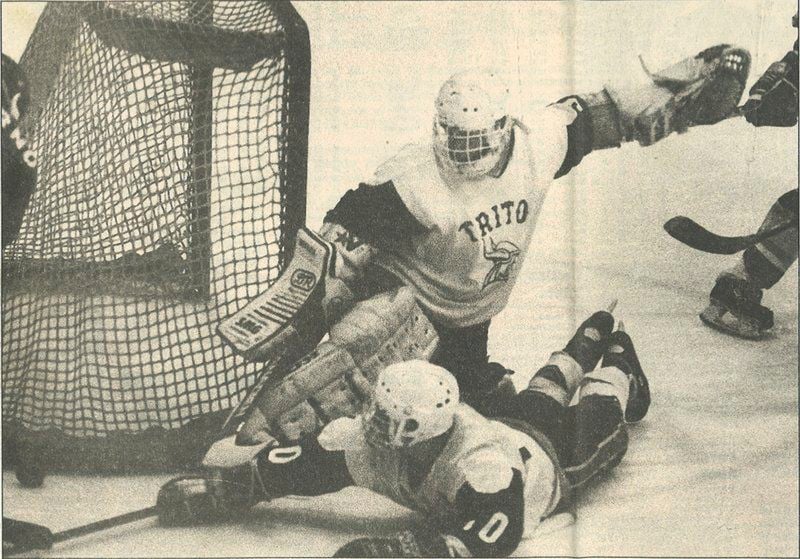 File PhotoTriton hockey goalie Chris Beevers defends the net as defenseman Paul Kohan slides across the ice to stop a shot in the 1990 EMass Division 2 Final against Arlington Catholic. Both players' sons were members of this year's 2019-20 Triton hockey team that reached the sectional final for the first time since their fathers' run 30 years ago.

BRYAN EATON/Staff photoThe Triton hockey team celebrates a goal during its Division 2 North quarterfinal game against Wilmington. The Vikings would make it all the way to the sectional final for the first time since 1990.

BRYAN EATON/Staff photoTriton defenseman Connor Kohan carries the puck up the ice during the Division 2 North quarterfinal against Wilmington.

File PhotoTriton hockey goalie Chris Beevers defends the net as defenseman Paul Kohan slides across the ice to stop a shot in the 1990 EMass Division 2 Final against Arlington Catholic. Both players' sons were members of this year's 2019-20 Triton hockey team that reached the sectional final for the first time since their fathers' run 30 years ago.

Triton hockey's run to the Division 2 North Final was a thrill for all involved. For players and coaches, the historic run was a validation of all their hard work, and for the parents and fans it was a joy to see the Vikings make their deepest push into the state tournament in 30 years.

For a select few, however, the tournament run wasn't just a dream come true — it was like deja vu.

Paul Kohan and Chris Beevers, whose sons were among those to star on this year's team, were also members of the 1989-90 Triton hockey team, which until this winter was the only team in program history to reach the sectional final.

"There was a lot of connection, it's pretty interesting that it was 30 years ago exactly," said Kohan, a longtime Triton Youth Hockey coach whose sons Connor and Cael were both among the team's top players as a senior defenseman and junior forward respectively. "It was my junior year during that 1989-90 season, it brought back memories obviously from when we were going through that whole process."

Led by standout scorers like Eric Brown, Sean O'Connell and Dave Poulin, along with current Central Catholic head coach D.J. Conte on the blue line opposite Kohan and with Beevers in net, the 1989-90 Vikings have long stood as one of the best all-around teams in area history. The Vikings finished the season 20-3-1, blowing out Duxbury 8-1 in a thrilling sectional semifinal before losing to Arlington Catholic 5-2 in the EMass Division 2 Final at Boston University's Walter Brown Arena.

The team capped off a successful decade under longtime coach Dan O'Connell, who led the Vikings for 24 seasons between 1974 and 1998 and went 380-141-41 overall, and was a crowning moment for a group of players who had stuck together from their earliest years of youth hockey.

"We grew up together, we graduated high school together, we did basically everything together," said Conte, whose son Joe was also a defenseman at Triton before his graduation in 2018. "So for me, I remember the camaraderie, the locker room, the friendships and teamsmanship that we developed was something special."

For the most part, that group has stuck together in the years since as well.

"We've kept in touch, we still play men's league and we all had kids around the same timeframe, so we all got back involved," Kohan said.

"After high school and college I got back into it immediately, doing Learn to Skate with my older son," said Beevers, whose youngest son Mike was a senior assistant captain this winter and was the fourth Beevers brother to come through the program. "It's been a long time, and other than the four years of being in college I think it's been close to 40 years that I've been involved in Triton Youth Hockey."

Having seen the value in keeping one group together from an early age, the parents made an effort to try and give their sons the same experience. This year's Vikings, and the junior class in particular, have for the most part been playing together since the beginning, and many of those players were also part of Triton Youth Hockey's first state championship team.

The early work began paying off once the group reached high school. Last year Triton hockey enjoyed a breakthrough season, going 15-6-2 while reaching the Division 2 North semifinals for the first time in recent memory. Then this year the Vikings did one better, finishing 17-5-2 including a trip to the sectional finals. The Vikings upset No. 1 seeded Masconomet in the tournament both years, dispatching of the Chieftains 2-1 in overtime of this year's sectional semifinal in the final meeting of the two programs as Cape Ann League rivals.

"It was a very close parent group, and kids group. Every Friday the parents would put together pasta parties for the kids, and it wasn't just for them," Kohan said. "Everyone gathered to feed the kids and get them ready for their Saturday games, and we stuck together and followed through their journey together. It was one of the most fun high school seasons so far to be a part of and I see that continuing."

Unfortunately for the Vikings, the symmetry between the parents and their kids extended to the final game. Where the 1989-90 team took one to the chin from Arlington Catholic in their last game — falling behind 5-0 before finishing strong over the final two periods — the 2019-20 team got clocked by Lincoln-Sudbury 8-1 in their finale.

Tough as that was for the Viking hockey community to take, in the long run it won't diminish how rewarding the entire experience was for everybody involved.

"We had so much fun this year," Beevers said. "It was really exciting to see them have the success they had this year. The ending of it is never fun, but at the beginning of the season if you said 'hey you're going to get to the North Final,' I think everyone would have been happy with that outcome."