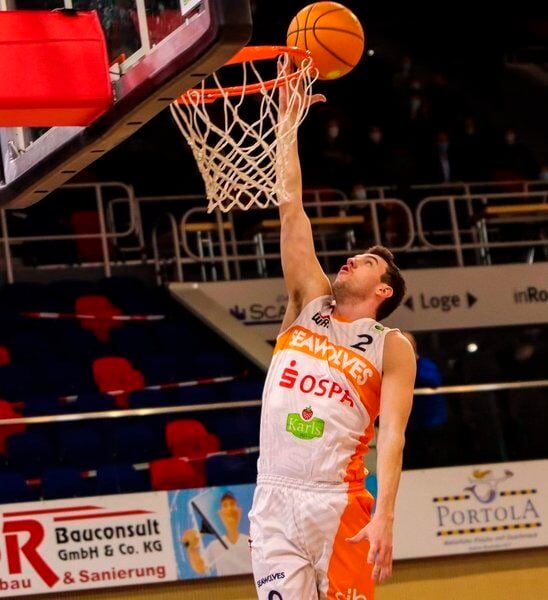 Courtesy photoBradford native Tyler Nelson lays the ball in during a recent game for the Rostock Seawolves in the German Second Division League. Nelson averaged 10 points per game and hit 33 percent of his 3-pointers. 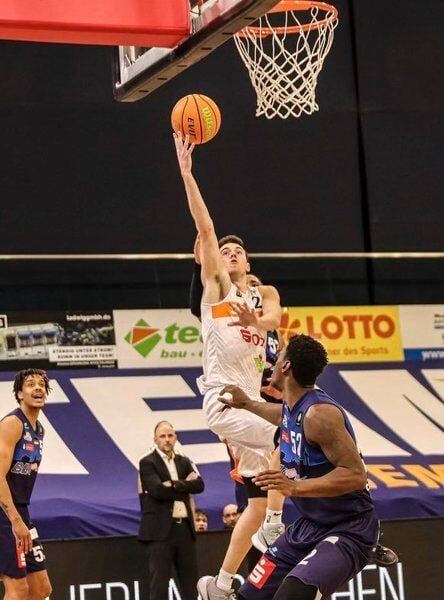 Courtesy photoBradford native Tyler Nelson is shown here driving for a layup playing for the Rostock Seawolves in the German Second Division League. Nelson averaged 10 points per game and hit 33 percent of his 3-pointers. He also had his best game of the year in the finale on Sunday.

Courtesy photoBradford native Tyler Nelson lays the ball in during a recent game for the Rostock Seawolves in the German Second Division League. Nelson averaged 10 points per game and hit 33 percent of his 3-pointers.

Courtesy photoBradford native Tyler Nelson is shown here driving for a layup playing for the Rostock Seawolves in the German Second Division League. Nelson averaged 10 points per game and hit 33 percent of his 3-pointers. He also had his best game of the year in the finale on Sunday.

What’s it like to be Steph Curry? You know, the unconscious-like marksman from beyond the three-point arc.

We can only dream.

Or, you could’ve been Tyler Nelson on Sunday night in Rostock, Germany.

The scenario was this:

After an impressive three-month stretch for Nelson in which he worked his way into the Rostock Seawolves lineup, averaging 10 points a game, the best player, Behnam Yakhchali, returned from a bad ankle injury and Nelson sat for five straight games as the first-place Seawolves entered the playoffs.

Ironically, the reason Nelson joined Rostock in January was due to that injury to Yakhchali.

Rostock, playing in four-team round-robin playoffs at its home site due to COVID-19, with four other teams doing the same thing in another round-robin, was officially eliminated from playoff contention with one game remaining against Jena.

Basically, a consolation game for Rostock.

Nelson, who is one of the best all-time players at both Central Catholic and Fairfield University, played about five minutes in the first half and Rostock trailed by 21 points. He was back into the game with six minutes left in the third quarter (10 minutes per quarter) and never left the game.

There was a reason. He went on a bit of a Steph Curry run.

Nelson hit five of seven 3-pointers, including two with a defender in his face, and was 4 for 4 from the line. That’s 19 points in 16 minutes.

But what made it special was that Rostock won the game by four, giving the home fans a nice end of the season kiss.

“It was an awesome experience,” said Nelson of that finale. “I got in a little bit of a zone. I felt really good. And the ball was going in. It was a great ending.”

What’s even better was Nelson’s ability to stay ready, despite the benching, which wasn’t due to poor play.

“That’s something I’ve always prided myself in, being ready when my name is called,” said Nelson. “I'm not going to lie. It was frustrating. It’s not easy sitting on the bench, not playing, but you have to be ready if an opportunity arises. You never know.”

Nelson’s season and finale has him in position to receive another contract next season, as the Seawolves general manager lauded his efforts since joining the team four months ago.

“I would definitely consider going back, but the key would being there the entire season,” said Nelson. “I loved Rostock, the city. It’s a beautiful place on the water (German Baltic Coast). I had a really nice apartment that overlooked the city. I got a new Volkswagen with only 5,000 miles on it.”

As most European league rules have, two German players must be on the court at the same time at all times. It can be tricky sometimes as the coaches need to keep track of who’s on the floor.

But Nelson felt the German Second Division League suited his game. The shorter games made each possession more important and more structured, with players having roles.

“Sometimes the G-League turns into iso-ball,” said Nelson, referring to isolating a good player and letting that player take over. “It’s a little more physical here. You can get away with more. But it’s probably more a team game, which I like a lot.”

Nelson was supposed to be home by now, but soon after the game it was learned that one of the referees in the finale came down with COVID-19 and the entire Seawolves team has to quarantine through Thursday.

Then he and all of the players and coaches need a negative test to get out of the country. If everything goes as planned, Nelson will be home on Saturday.

“I will take a little time off, but my agent will be figuring out some options,” said Nelson. “I would hope to sign early in the summer and be involved in full workouts, getting ready, in August.”

As for what he learned about the German culture, one thing wasn’t the language.

“I can get by with ‘How are you doing?’ and ‘Thanks,’” said Nelson. “Honestly, one of the best parts is that most Germans speak pretty good English. Our (Rostock) coach spoke good English. I’d have to do a better learning German if I go back again.”

And more days acting like Steph Curry would be a nice cherry on top.