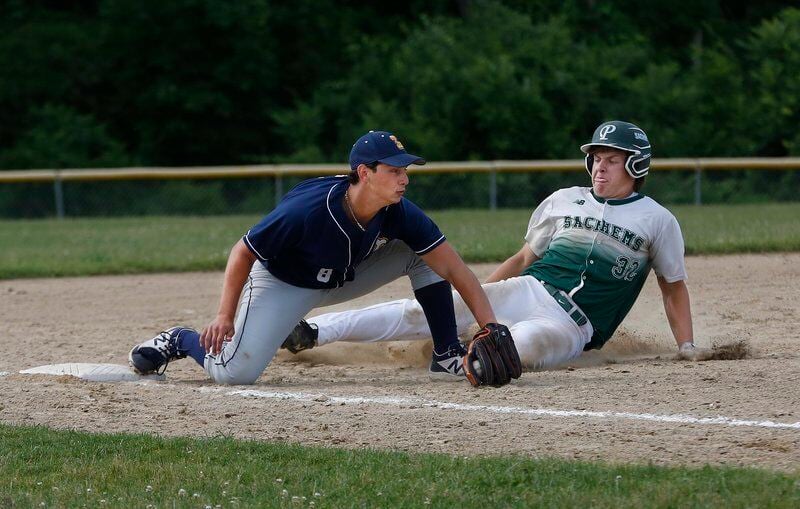 MIKE SPRINGER/Staff photoPentucket's Chase Dwight slides into third base trying to beat the throw during Thursday's game against Lynnfield. 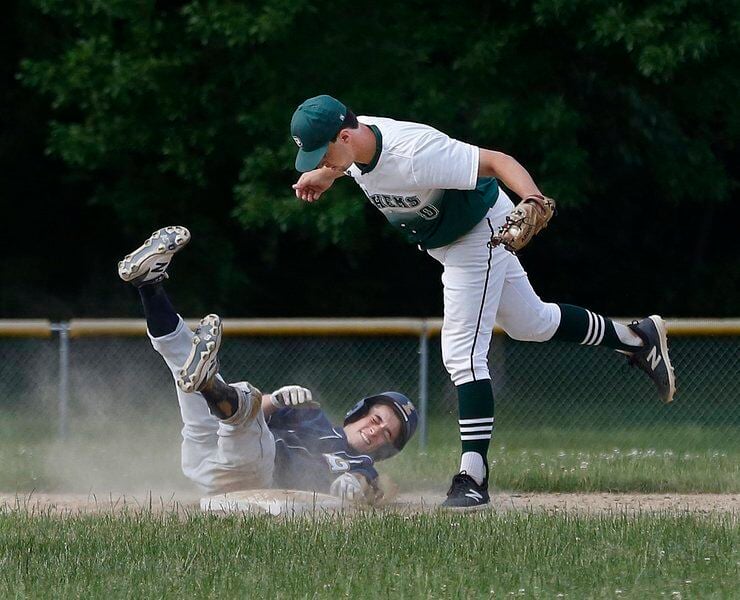 MIKE SPRINGER/Staff photoPentucket's Ethan Hunt steps back as a Lynnfield baserunner tumbles back to second base on a pick-off attempt during Thursday's game. 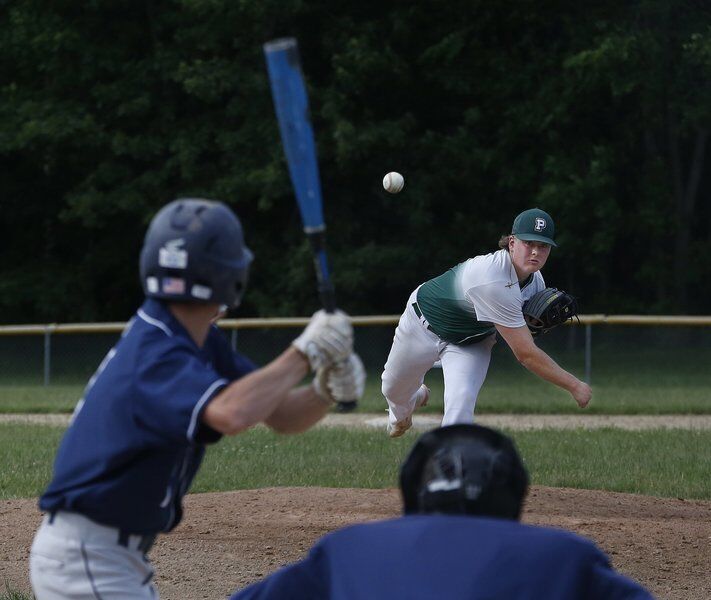 MIKE SPRINGER/Staff photoPentucket's Andrew Melone fires in a pitch against a Lynnfield batter during Thursday's game. Melone had 10 strikeouts in the 9-1 win.

MIKE SPRINGER/Staff photoPentucket's Chase Dwight slides into third base trying to beat the throw during Thursday's game against Lynnfield.

MIKE SPRINGER/Staff photoPentucket's Ethan Hunt steps back as a Lynnfield baserunner tumbles back to second base on a pick-off attempt during Thursday's game.

MIKE SPRINGER/Staff photoPentucket's Andrew Melone fires in a pitch against a Lynnfield batter during Thursday's game. Melone had 10 strikeouts in the 9-1 win.

Pentucket baseball jumped all over Lynnfield early and Andrew Melone took care of business from there, pitching a complete game with 10 strikeouts in his team’s 9-1 win on Thursday. Melone allowed four hits and one run with no walks while also going 2 for 4 with a run, and Joe Lynch (two doubles), Trevor Kamuda and Kyle Ventola all had two RBI to lead the big offensive performance. Pentucket is now 7-7 on the year heading into Saturday’s Spofford Tournament consolation game.

Amesbury baseball picked up one of its biggest wins of the season Thursday, taking down first-place Hamilton-Wenham 4-1. Trevor Kimball earned the win after allowing one run over six innings, Drew MacDonald earned the save with a perfect seventh inning and Shea Cucinotta went 2 for 2 with a run and two RBI to lead the Indians’ offense. Amesbury is now 7-5 on the season and will play at Rockport on Saturday.

Triton boys lacrosse has continued its outstanding spring this week, picking up a pair of crucial wins over Pentucket and previously unbeaten Ipswich. The Vikings beat Pentucket 16-8 on Wednesday, with James Tatro scoring seven goals with four assists while Jared Leonard had three goals and five assists, and on Thursday Triton handed Ipswich its first loss by a score of 14-9. Tatro and Leonard both had six goals each as the Vikings improved to 10-1 on the season, and now Triton will look ahead to Saturday’s big game against Newburyport.

In their last dual meet before the postseason, Newburyport and Amesbury track and field faced off in a pair of tightly contested dual meets on Wednesday, with the Amesbury boys and Newburyport girls coming out on top.

The Amesbury boys won 77-68 largely on the strength of its field performers. Max Lapointe won both the shot put and discus, Brady Dore took the javelin, John Remington-Field won the pole vault and Ben Ayotte continued his brilliant season by taking the long jump.

Though the Clippers fell short, Newburyport did have arguably the performer of the day in senior Trevor Ward, who out-dueled Ayotte to win the 100 meters with a blistering 11.3 time while also winning the 200 and triple jump. T.J. Carleo was also a double winner for Newburyport, taking the 800 while anchoring the victorious 4x400 relay.

It was a similar story in the girls meet, only this time Newburyport’s strength in the track events was enough to pick up the 78-67 win. The team of Blake Parker, Violet Moore, Annabel Murray and Olivia Gustafson clinched the victory with a 4x400 relay win, and Parker (400), Moore (800) and Murray (long jump) each captured an individual event as well to lead the win.

For Amesbury, sophomore Meagan McAndrews enjoyed a career day, placing first in the javelin, 100 hurdles and 400 hurdles. Nixie Raymond also won both the 100 and 200 and Madison Sanchez (pole vault), Avery Hallinan (shot put) and McKenna Hallinan (discus) all won individual events while teaming with Lidya Belanger to win the 4x100.

In the area’s other big rivalry meet, Pentucket and Triton track earned a split as the Triton boys picked up an 83-57 win while the Pentucket girls won 97-48.

For the boys, Triton’s Reilly Gagnon won the long jump and 110 hurdles to wrap up an incomparable senior season. Gagnon finishes the dual meet schedule undefeated in the 110 hurdles, 400 hurdles, 400 meters and in both relays, and his 121 points in seven meets is among the best in program history.

On the girls side, Emily Rubio won the 400 hurdles, long jump, high jump and 4x400 relay, Ava Snyder won the shot put and discus, Kinneal Dickens the pole vault and 100 hurdles, and Syeira Campbell, Sabrina Campbell, Reese Gallant and Phoebe Rubio all won an individual event and a relay each to complete the convincing victory.

Round 2 goes to Triton

After losing to Newburyport in the season opener, Triton baseball evened the season series on Wednesday with a big 7-2 win. Cael Kohan pitched a complete game and tallied nine strikeouts for the win, and Joe Abt went 3 for 4 with two RBI to lead the offense. Triton is now 7-6 and Newburyport now heads into the Bert Spofford Tournament mired in a three-game skid, having also lost to North Reading 12-1 on Thursday afternoon. The Clippers (10-4) and Vikings will face off on Saturday at 3 p.m.

Amesbury boys tennis earned a hard-fought 3-2 win over Pentucket on Wednesday, with Alex Pucillo winning his team one of the decisive points with a convincing 6-0, 6-2 win at first singles. Third singles player David Roberts and the second doubles team of Mike Adams and Nick Rodgers were Amesbury’s other winners, and Pentucket got wins at second singles from Ben Brookhart and from Aiden Wilcox and Aidan Davey at first doubles.