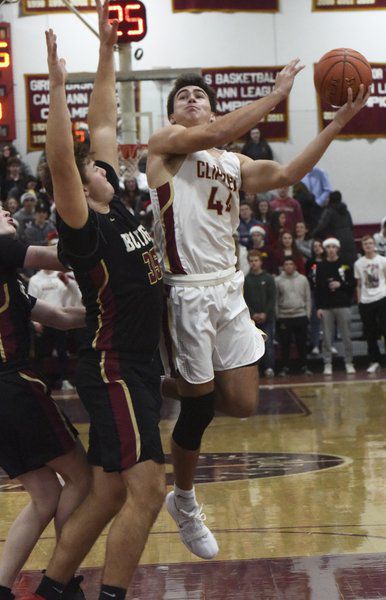 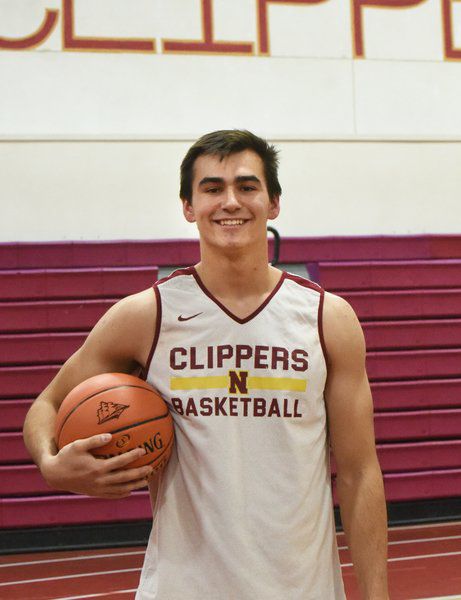 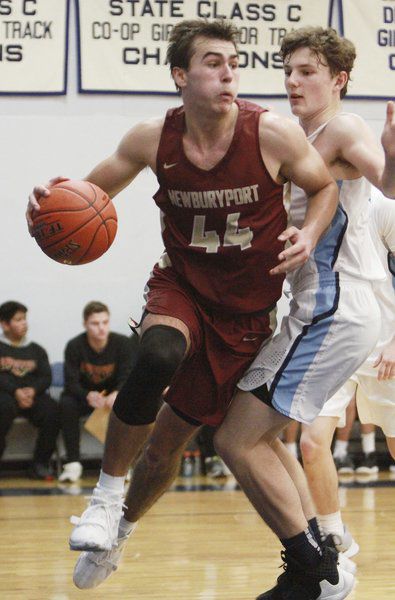 Nicole Goodhue Boyd photoNewburyport's Parker McLaren, shown here driving to the basket against Georgetown earlier this winter, has enjoyed one of the greatest single seasons in program history.

Nicole Goodhue Boyd photoNewburyport's Parker McLaren, shown here driving to the basket against Georgetown earlier this winter, has enjoyed one of the greatest single seasons in program history.

NEWBURYPORT — Parker McLaren stepped to the free throw line, taking a couple of quick dribbles before putting up the foul shot. To his left was a horde of Pentucket Regional High students crowding their home gym's bleachers, and as McLaren reached up to take the shot, a voice boomed out from the crowd.

The Newburyport basketball senior had heard that one before. As the younger brother of one of the area's all-time greats, Parker has been compared to Casey McLaren his entire basketball career. Taunts like that had become a go-to for opposing fans looking to get in his head, but rather than acknowledge the heckler, McLaren calmly swished the free throws, got right back on defense and proceeded to drop a career-high 36 points on the Sachems.

"I always try to block out the fans no matter what they're saying, but that might have fueled the fire a little bit," McLaren admitted recently.

Fairly or unfairly, the perception that Parker lived in his brother's shadow did exist coming into this season, but if it ever had any validity, it certainly doesn't anymore. With Casey now playing at Tufts University, Parker has embraced his new role in the spotlight and is turning in one of the greatest seasons in Newburyport boys basketball history.

More impressively, McLaren has done it while staying true to his own game, and when all is said and done he'll have a season on his resume that stacks up as well — if not better — than any his brother ever had.

When last season ended, McLaren immediately got to work in hopes of improving himself as a player. Knowing that he'd be counted on to lead Newburyport's offense, McLaren understood that he'd need a stronger all-around game and couldn't remain the low-post player he'd largely been up to that point.

The No. 1 priority? Improving his 3-point shot.

Starting in the spring, McLaren put up hundreds of 3-pointers per day. He spent all offseason practicing with his high school and AAU teammates, and once the new school year began he made a point to come in early to put up more shots before class.

"He'd come in in the morning, get out the shooting machine, and I'd walk in and he'd have already gotten up 200-300 shots," said Newburyport coach David Clay. "It was a big goal of his to improve that part of his game and I'm proud that he's reaping the rewards of his work ethic."

McLaren's improvement has been striking. Last year he only made 12 3-pointers the entire season, but this year he has already knocked down 50.

With that shot in his arsenal, defenders now had to respect him as a deep threat, which opened up the rest of the floor to McLaren.

"That's another benefit of having that 3-point shot," McLaren said. "I can bring the defender out and it makes the inside game easier."

McLaren has become the perfect centerpiece for a Newburyport offense that prizes efficiency above all else. By avoiding bad shots and letting the game come to him, McLaren has been able to average 22.3 points per game while shooting close to 50% both from the field and from 3-point range.

Between his versatility and efficiency, Clay said McLaren has become everything you could ever want in a high school player.

Doing it his own way

McLaren hasn't just turned himself into a top notch basketball player, he's also stepped up as an outstanding leader.

After Casey graduated, it would have been easy for Parker to try and emulate his older brother and take over as Newburyport's alpha dog. In a way he has, but rather than try to dominate the game as many star players do, McLaren has often deferred to his teammates, preferring to take advantage of good opportunities rather than force ones that might not be there.

"He could have assumed we would defer to him, but he took an opposite approach where he's been taking shots when he's open but if it's not there he's moving the ball," Clay said. "He's probably one of our better passers, he's just got a great all-around game. I can't say there's ever a game we've played where I thought he's hunting shots, everything comes within the flow of the game."

That's been especially notable considering how much of an incentive McLaren's had to score in bunches. Coming into the season with 556 career points, McLaren needed a huge year to reach 1,000 points, and with opposing fans shouting things like "Casey's better!" from the crowd, it would have only been natural for him to try and prove everyone wrong.

Yet his approach never changed.

"I was very impressed with that Pentucket game, he didn't heckle back or even acknowledge the fact that they were saying that to him, he just worked harder," Clay said. "He has been compared to his brother a lot, and it's understandable. They both have the same build, have a great skillset and are phenomenal basketball players, but watching him develop more in the summer into his own player and into being his own man has been one of the highlights of my career."

"It's never been about him," Clay continued. "I think he's sat out, if I add up all the fourth quarters he's had to sit because we've had a lead, he's probably not played two or three games. We've played a couple of coaches where they've had players close to 1,000 and they'll give me a heads up where they're like 'hey we're going to leave him in in the fourth quarter so he can get his points up,' and Parker's never been about that. He's never asked to go back in during the fourth quarter to get more points, he's just cheering on his teammates, and there's no better way I could have seen it going for him."

As it turned out, McLaren was still able to achieve all of his goals despite those sacrifices. Since scoring 36 against Pentucket, McLaren averaged 27.5 points per game — including two subsequent games with 30-plus points — leading into Wednesday night's regular season finale against Beverly. In doing so he was able to reach 1,000 points far sooner than even the most optimistic projections might have suggested possible.

Getting it done quickly had another benefit too, as now there won't be any distractions when Newburyport heads into the Division 3 North tournament. And while the numbers and accolades are all great, the team's ultimate prize does still lies ahead.

"We've been saying all year our goal is to win a state championship and I think we have a good shot," McLaren said. "Looking at all the teams in the D3 North, I think we can beat every one of them, but we still need to take it one game at a time and focus on winning that first game for now."

Who did it best?

While Casey McLaren will likely always have the edge in terms of career numbers and accolades, Parker McLaren does now have a strong case for owning the best single season of the brothers. Here's how his year stacks up against Casey's MVP-winning junior and senior years.