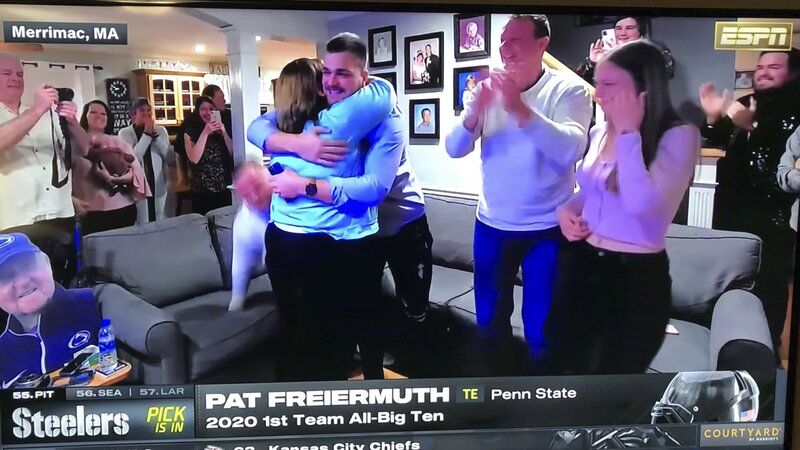 ESPNMerrimac's Pat Freiermuth hugs his mother Dianne after receiving the call that he'd been drafted No. 55 overall by the Pittsburgh Steelers. 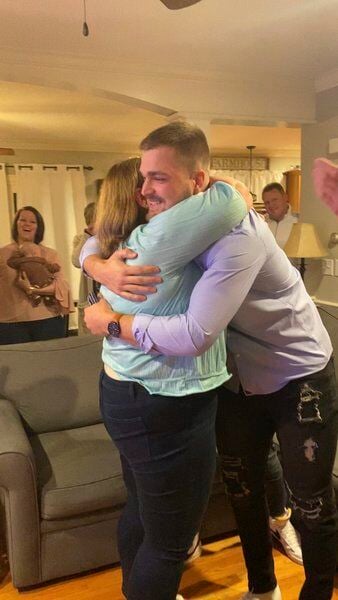 Courtesy PhotoPat Freiermuth hugs his mother Dianne while surrounded by family after receiving the call that he'd been drafted in the second round by the Pittsburgh Steelers. 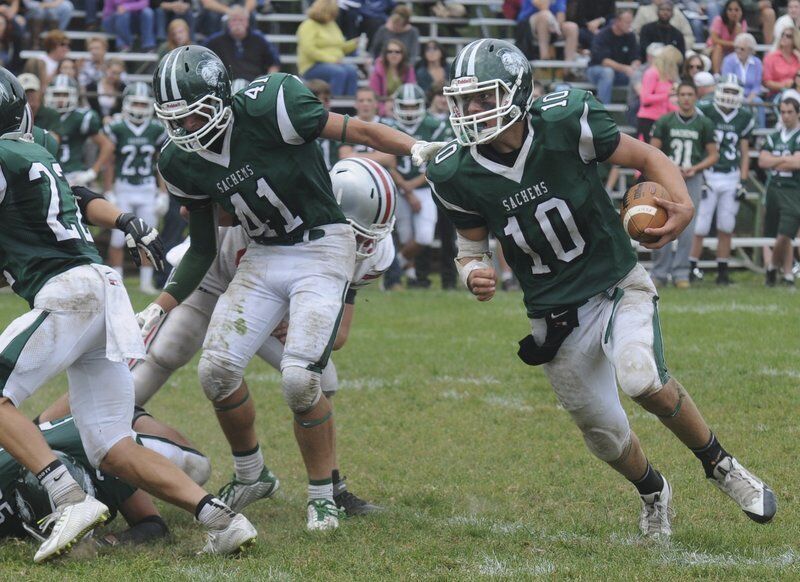 ESPNMerrimac's Pat Freiermuth hugs his mother Dianne after receiving the call that he'd been drafted No. 55 overall by the Pittsburgh Steelers.

Courtesy PhotoPat Freiermuth hugs his mother Dianne while surrounded by family after receiving the call that he'd been drafted in the second round by the Pittsburgh Steelers.

Pat Freiermuth is officially headed to the NFL, as the former Pentucket and Brooks School football star was drafted by the Pittsburgh Steelers in the second round (No. 55 overall) of the 2021 NFL Draft.

Freiermuth, a 6-foot-5, 251-pound tight end from Merrimac, was the second tight end selected and will continue his football career in Pennsylvania after a stellar three-year college career at Penn State.

"When I saw that Pittsburgh area code I thought it was one of my friends from Penn State pranking me, but I answered the phone and it was Coach Tomlin," Freiermuth said after his selection. "It was one of the best feelings I've ever had, playing for an organization as storied as the Steelers."

Freiermuth joins the Steelers after establishing himself as one of the nation's top tight ends down the road in Happy Valley. During his college career, Freiermuth recorded 92 catches for 1,185 yards and 16 touchdown catches, a program record for a tight end.

He broke out during the 2018 season as a true freshman, was named a team captain as a sophomore, and this past fall was named Kwalick-Clark Tight End of the Year, which is awarded annually to the top tight end in the conference, despite playing nearly the entire season with a shoulder injury.

Freiermuth ultimately played only four games before undergoing season-ending surgery, but he says he is back to full health and is ready to go for the upcoming season.

Earlier in the draft, the Pittsburgh Steelers also drafted Alabama running back Najee Harris at No. 24 overall, and Freiermuth will join a Steelers offense led by veteran quarterback Ben Roethlisberger.

"Growing up I obviously watched him play a bunch and ball out, and it's weird that he's going to be my quarterback now and I can't wait to go out there and catch footballs from him and make plays with him," Freiermuth said. "It's going to be an unreal experience to be with that offense with him."

Freiermuth also joins a Pittsburgh offense that features wide receivers JuJu Smith-Schuster, Chase Claypool and Diontae Johnson, as well as veteran tight end Eric Ebron. The Steelers went 12-4 in 2020, and while Pittsburgh won't play the New England Patriots in 2021, the Steelers do have games against notable teams like the Kansas City Chiefs, Green Bay Packers and Seattle Seahawks.

Before he joins his new team, however, Freiermuth soaked in the moment with his family and friends, who hosted a draft party at the Freiermuth home in Merrimac. Following the draft, Freiermuth thanked his family and expressed his excitement for the next stage of his football journey.

"I owe the world to my mom and my dad, brother and sister and everyone else who was here tonight," Freiermuth told The Daily News after his selection. "They've been there from the start, and I'm excited to continue this in my next chapter in Pittsburgh and have them every step of the way."