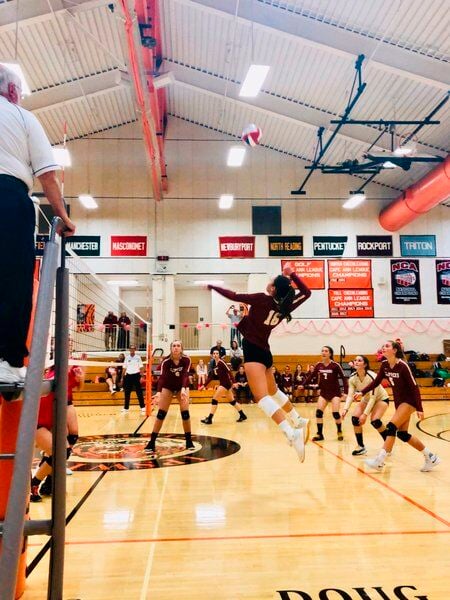 Courtesy PhotoNewburyport's Sydney Yim, who is already a two-time Daily News MVP heading into her senior season, will go on to play Big Ten women's volleyball at Purdue University. 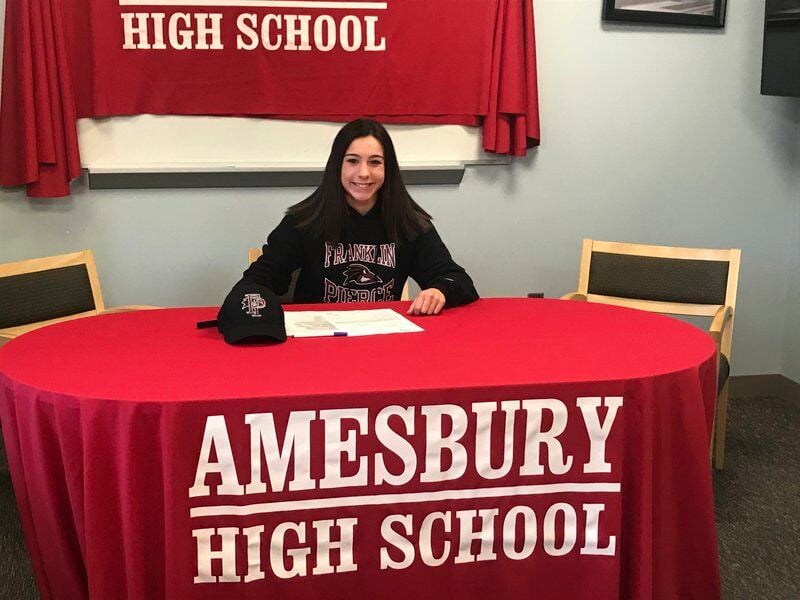 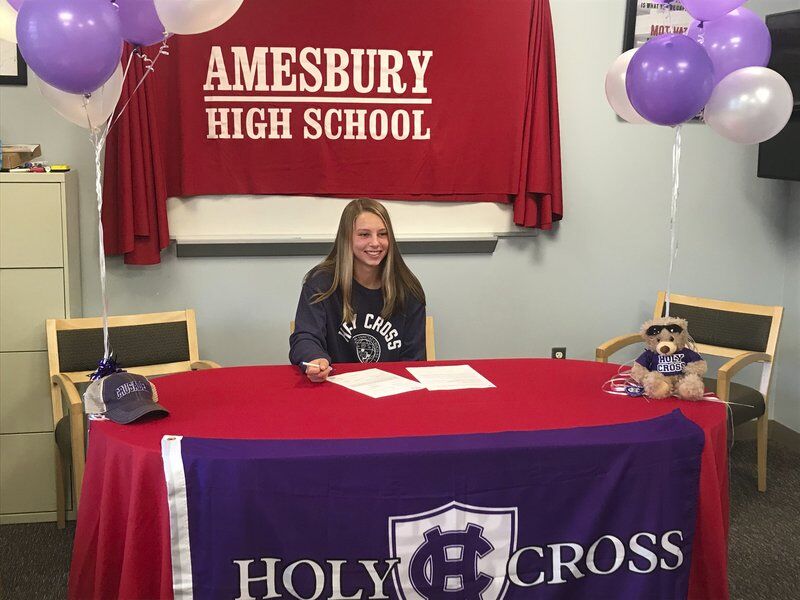 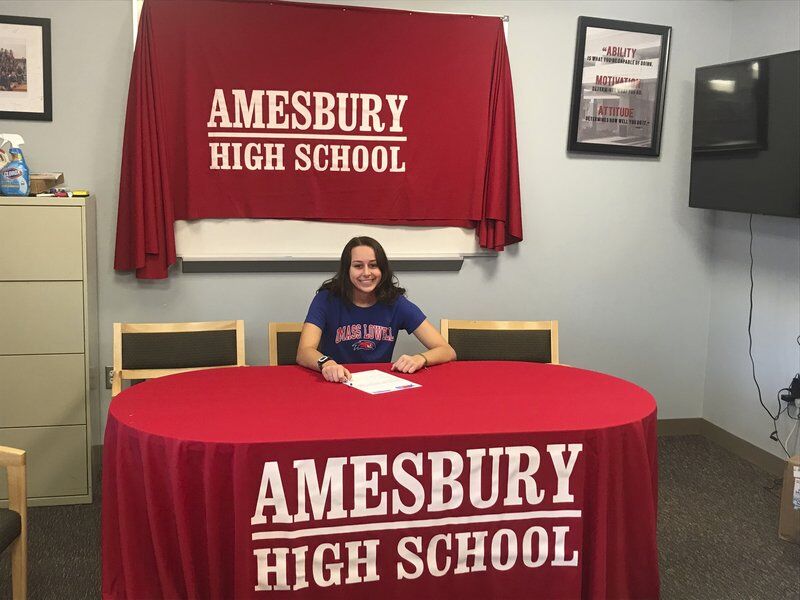 Courtesy PhotoNewburyport's Sydney Yim, who is already a two-time Daily News MVP heading into her senior season, will go on to play Big Ten women's volleyball at Purdue University.

Starting with Wednesday’s National Signing Day and continuing over the next month of so, 13 area standouts are expected to make their college commitments official. Here is a look at each signee their high school accomplishments and their future plans.

A four-year varsity starter, Callie Beauparlant has been Newburyport field hockey’s top offensive weapon throughout her entire high school career, and this fall the senior took her game to even greater heights. Beauparlant led the area in scoring with 16 goals and seven assists in only 10 games this fall, helping lead the Clippers to an 8-2 record and the program’s first CAL Kinney title since 2011. Overall Beauparlant will finish her career with 48 career goals and is set to join an Assumption program coming off a 16-5 season in 2019 and an appearance in the NCAA Division 2 Tournament.

Having spent his first three years of high school at the Tilton School in New Hampshire, Jax Budgell transferred back home to Newburyport High for his senior year due to the coronavirus pandemic. A three-sport athlete starring in baseball, football and basketball, the 6-foot-2 outfielder helped lead Tilton to a Lakes Region championship as a sophomore and has consistently been a top-of-the-order hitter throughout his career. Budgell also plays for the Team Boston 17U AAU club and committed to St. Anselm in October.

A starter since her freshman year, Sam King has ranked among the top girls lacrosse players in the Cape Ann League right from the start. As a freshman she helped lead Newburyport to an undefeated regular season and a Division 2 North championship, and as a sophomore in 2019 she earned All-CAL honors after scoring 61 goals with seven assists. King played a key role in leading the Clippers to a third straight Division 2 North finals appearance, scoring seven goals in Newburyport’s 14-13 overtime win, including the last six, two inside the last 1:35 to force OT and then the game-winner. King did not get to play her junior season but is expected to once again rank among the league’s best as a senior this spring.

While Ellie Schulson is best known locally for her accomplishments in cross country, she is also an elite tennis player who ranks among the best in the country on the club circuit. Schulson is a five-star recruit according to www.tennisrecruiting.net, is the No. 2 ranked player in Massachusetts and has ranked as high as No. 20 nationally. She achieved a No. 1 USTA sectional ranking for the 12, 14 and 16-year-old age groups and currently ranks No. 2 among 18s. She has also won four national open singles tournaments. Schulson did not play tennis at Newburyport High, competing instead with the Manchester Athletic Club, and she will join a Division 1 Furman University program that has historically dominated the Southern Conference.

A standout defender, Lily Spaulding has played a key role on the Newburyport girls lacrosse team throughout her career. As a freshman in 2018 she earned a varsity spot on one of the area’s all-time great teams, helping the Clippers to an undefeated regular season, Division 2 North championship and a 23-1 overall record. She took on a much bigger role as a sophomore in 2019, helping Newburyport back to the Division 2 North finals while winning the program’s third straight CAL title. Spaulding did not get to play her junior season this past spring due to the pandemic but is expected to be a major factor as a senior this spring.

After taking last fall off to focus on her club schedule, Allie Waters returned to the Newburyport girls varsity program as a senior and immediately established herself as one of the league’s top players. A starter all three years with the program, Waters had a team-high five goals and an assist to lead the Clippers offensively. She is also a dynamic playmaker, and as a freshman in 2017 she helped lead the Clippers to a Division 3 North title. Waters is now set to team up with Cape Ann League rival Alyssa Pettet of Amesbury at Holy Cross, a Division 1 program that went 5-4-8 in 2019.

Since transferring to Newburyport High from upstate New York midway through her sophomore year, Sydney Yim has established herself as not only one of the top volleyball players on the state, but as far and away the greatest girls volleyball player to come out of Greater Newburyport since the sport first gained traction in the early 2010s. Last fall the 6-foot-0 setter earned CAL co-MVP honors and was named Division 2 All-State after leading the Clippers to their first state tournament appearance in program history. She is also a two-time Daily News MVP for volleyball and will join a Purdue program that went 24-8 overall last fall and finished fifth in a loaded Big Ten.

A four-year starter, Brianna Morel has been a rock in the midfield for Amesbury field hockey since Day 1. After earning CAL All-Star honors as a junior last fall, Morel was named one of Amesbury’s four team captains this year and was among the team’s primary facilitators. Morel also recorded an assist against North Reading back on Oct. 16. Following her graduation Morel is set to join a Franklin Pierce program that also boasts former Newburyport High star Meghan Winn.

One of the state’s top soccer players, Alyssa Pettet did it all for Amesbury girls soccer over her four-year run. This fall Pettet led Amesbury in scoring for the second straight year after tallying seven goals and three assists in 10 games, and she also scored 22 goals as a junior, when she led Amesbury to its fourth straight Division 4 North title and its second CAL Baker title in three years. A defender by trade, Pettet earned CAL Baker MVP, Daily News MVP and All-New England honors in 2019, and following her graduation she will join Newburyport’s Allie Waters at Holy Cross.

A strong all-around athlete for the Amesbury girls track program, Madison Sanchez has had a hand in quite a few of the program’s greatest successes over the last few years. This fall she served as a team captain on team Amesbury girls cross country team, helping the Indians to a 4-2 record. She also helped the 4x50 relay team place first at this past winter’s Division 4 state relays, and the prior spring as a sophomore she placed 17th in the pole vault (9-0) at All-States after also helping the girls outdoor track win the 2019 Division 4 state relay title. Sanchez is primarily expected to compete in the pole vault at UMass Lowell.

A four-year starter for Pentucket girls soccer, Jacey Jennings has led a remarkable turnaround that saw the program go from being a doormat her freshman year to a CAL Kinney champion and likely state title contender as a senior. This fall Jennings averaged nearly three points per game, finishing with a league-best eight goals and 19 assists in only 10 games. Last fall she had 15 goals and 15 assists as Pentucket reached the Division 3 North semifinals for the first time in recent memory. She wraps up her career with 38 goals and 43 assists and will now go on to play Division 1 college soccer at the University of Vermont.

One more local athlete who is signing their letter of intent to play college sports this week is Pentucket’s Joe Lynch, who is committed to playing Division 2 baseball at American International College in Springfield. Lynch, a senior catcher, did not get to play his junior season of baseball for Pentucket last spring due to the pandemic, but as a sophomore he helped lead his team to a remarkable bounce-back season in which Pentucket went from two wins in 2018 to 14 wins and a CAL Kinney title in 2019. He batted .302 with 19 hits that spring and more recently helped the Pentucket Nor’Easters 17U team on a deep run in the Essex County Baseball League playoffs this past summer.

One of the most accomplished boys track and field performers in Triton history, Graham Stedfast rewrote the record books and recently wrapped up one of the best cross country seasons in school history. This fall Stedfast was the CAL’s top runner, helping the Vikings capture their first league title in decades. He also owns Triton’s school records in both the indoor (4:27.80) and outdoor mile (4:27.37), the former having stood for 13 years and the latter for more than 40. He also helped lead Triton outdoor track to the 2018 Division 4 state championship and will now become the latest Triton great to run for UMass Lowell, following Kerstin Darsney and Taelour Murphy.

If there are any local athletes signing National Letters of Intent this week who were omitted from this story, please contact Mac Cerullo at mcerullo@newburyportnews.com.

Governor’s Academy recognized nine athletes on Wednesday as they signed their National Letters of Intent. Those athletes include: