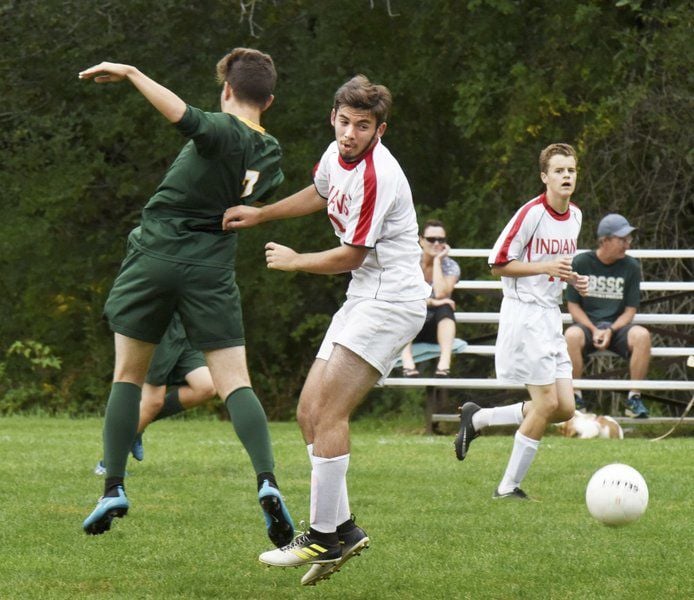 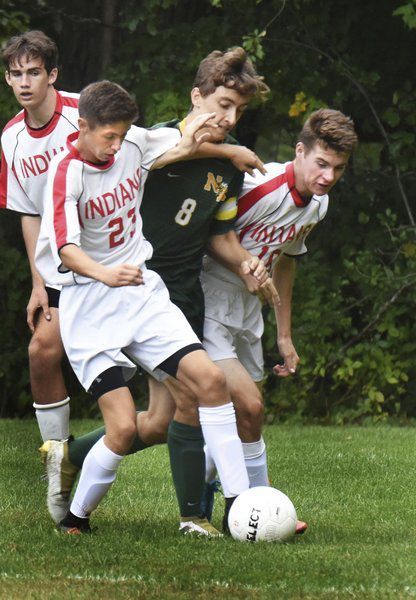 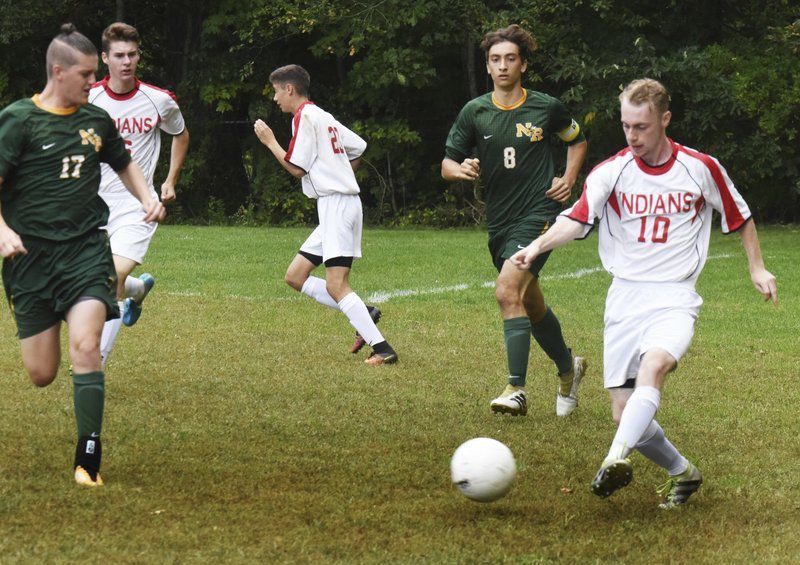 AMESBURY — It took just one second half whistle to turn momentum against the Amesbury boys soccer team and send North Reading to its first victory of the season.

Trailing 2-0 midway through the second half, the Indians were called for not having a second player touch the ball on a throw-in. The Hornets sent the ball downfield on a quick restart and immediately scored, and from there, the Indians couldn’t respond, falling 5-0.

“I loved the hard work that the guys gave tonight,” said Indians (0-3) coach Luke Alley. “I think they did a lot of the things that we’ve been asking of them. They possessed the ball well, we communicated and worked very hard, everything I expected.”

The Indians’ effort didn’t go unnoticed by their opponent.

“I thought in a lot of the aspects of the game, especially early, we were outplayed,” said Hornets (1-2) head coach Mark Bisognano. “Amesbury came out and moved the ball very well. They were strong and bigger than we were, but we found holes in their defense in the second half.”

The pace was slow to start the contest, but the Hornets finally scored late in the first, and then again about three minutes later to make it 2-0 heading into the half.

Going into the second frame, the Indians were finally able to get some chances. Michael Gonthier had the first chance, missing high over the crossbar, before Zac Daniels had his shot in the box alone saved.

It was midway through that second half where the visitors scored on the controversial call, and it was Ian Branconnier’s second tally of the day seconds later to widen the score.

“Branconnier had a nice game,” said Bisognano. “Played strong on both wings for us and up top. Scored a couple goals, two nice goals. He’s been a scorer all season.”

Even trailing by three, the Indians pushed on. Simon Russell was in tight on the right side of the goal post and his shot was saved before Sean Reagan had two prime chances. His first was a header over the goal, and then on a breakaway he was stopped.

“Brian Edmunds and Russell up top were fantastic,” said Alley of the offensive efforts. “Honestly, it was a fantastic team effort.”

The Hornets also continued to press with Branconnier gunning for his third of the game on a breakaway stopped by Indians’ goalie Ben McAfee.

As the Indians offense continued to get opportunities, Russell hit the crossbar on what may have been the team’s best chance of the day, and two more late goals from the Hornets powered them past the home team in the end.

“I think it has to be a little bit more of us knowing our positions and where we have to be in those situations,” said Alley on what can be improved. “A few of the times it was inches away. We need to be on top of that stuff.”

The Indians will have a chance to respond on Monday on the road against Masconomet.