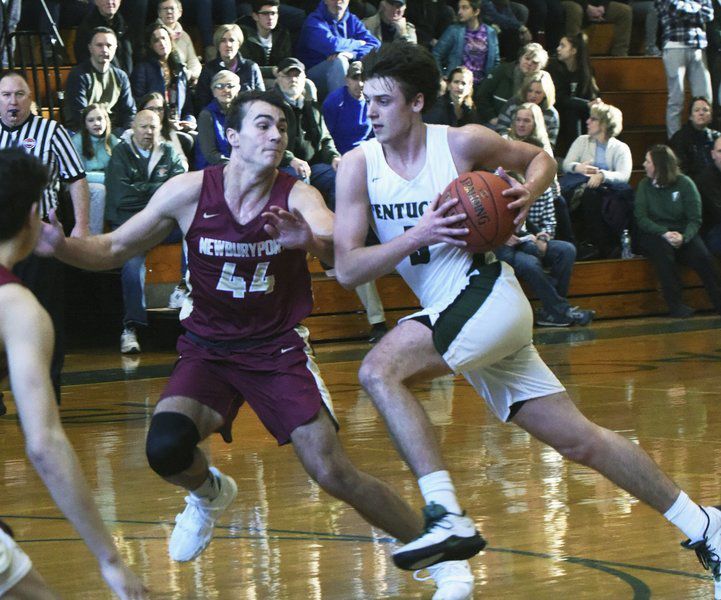 BRYAN EATON/Staff photoNewburyport's Parker McLaren guards a Pentucket's Peter Cleary as he drives to the basket. 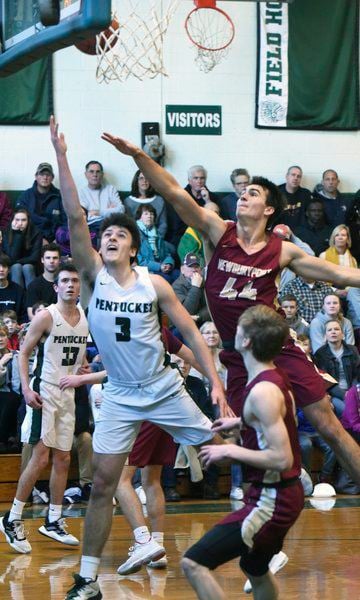 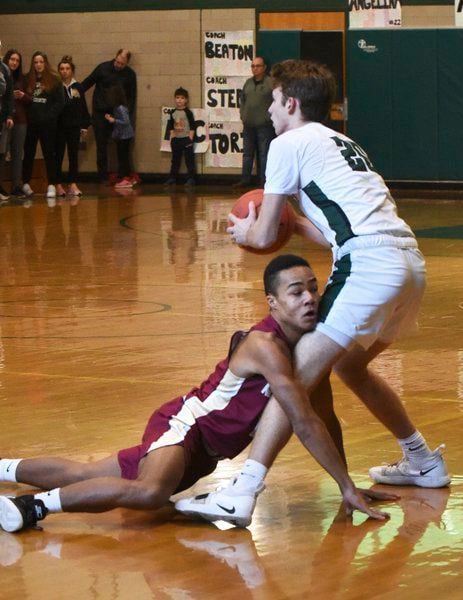 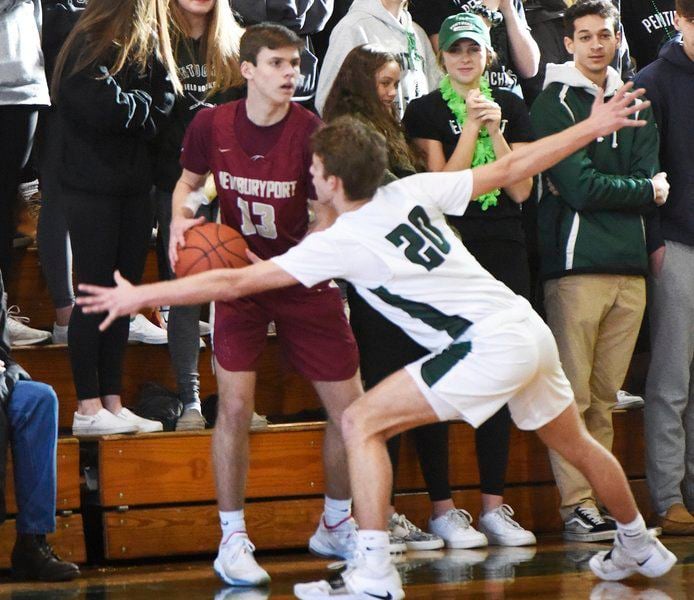 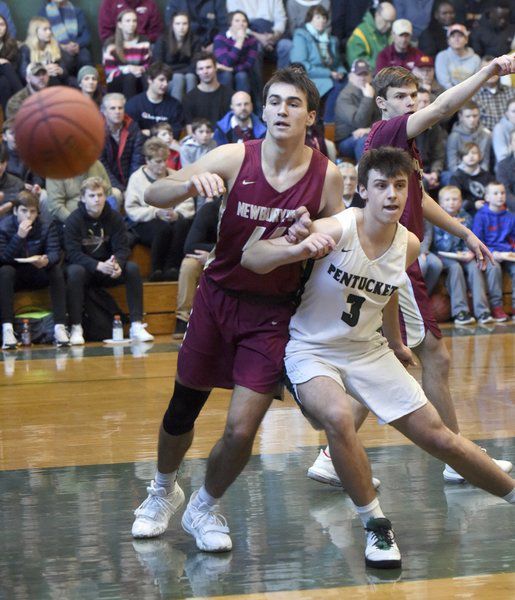 BRYAN EATON/Staff photoNewburyport’s Parker McLaren and Pentucket’s Peter Cleary collide under the basket while going for the loose ball. McLaren finished with a season-high 36 points and 11 rebounds while Cleary had 21 points and 9 rebounds in a battle of two of the CAL’s best. 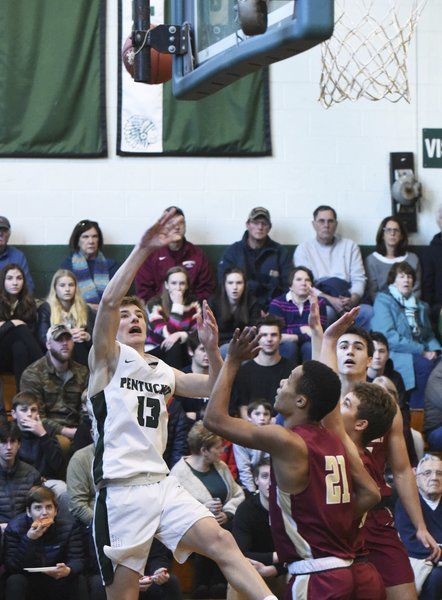 BRYAN EATON/Staff photoNewburyport's Parker McLaren guards a Pentucket's Peter Cleary as he drives to the basket.

BRYAN EATON/Staff photoNewburyport’s Parker McLaren and Pentucket’s Peter Cleary collide under the basket while going for the loose ball. McLaren finished with a season-high 36 points and 11 rebounds while Cleary had 21 points and 9 rebounds in a battle of two of the CAL’s best.

WEST NEWBURY — The latest meeting of Newburyport and Pentucket basketball seemed destined to go down to the wire.

For three quarters, the two sides traded haymakers in front of a jam packed Pentucket Regional High School crowd. With every Newburyport run, Pentucket answered with one of its own, at one point sending the game tied into halftime on a wild Owen Kamuda buzzer beating 3-pointer from three quarters of the court.

But after Kamuda knocked down another big 3-pointer to tie the game at 48-48 midway through the third, Parker McLaren and the Clippers decided they’d seen enough.

The Newburyport senior erupted for 16 points in the next four minutes, helping key a 21-2 run that effectively put the game out of reach. McLaren finished with a season-high 36 points, 11 rebounds and six 3-pointers as Newburyport picked up the thrilling 81-63 road win to remain unbeaten in Cape Ann League play.

“He’s such a hard worker,” said Newburyport coach David Clay of McLaren. “Even on our days off he’s texting me about getting into the gym to use the shooting machine, he just has a growth mindset that allows him to not be satisfied with where he’s at and he’s always looking to get better as a player, it’s all him, he’s a terrific young man.”

While McLaren truly went off in the third, he was great from the beginning. He also had 10 points in the first quarter and seven more in the second, battling with Pentucket’s Peter Cleary (21 points) in an epic battle of two of the CAL’s best.

Jacob Robertson (18 points) also had five 3-pointers, including two in Newburyport’s big third quarter, and sophomore Jack Fehlner (9 points) added three more as well. Collectively the Clippers knocked down 14 threes, including seven in the third to spark the rally.

“A couple defensive breakdowns on our end but they also made some tough shots,” said Pentucket coach Ed Hickey. “They have a couple of tremendous players there, [McLaren] and [Robertson] are terrific high school ballplayers and if you leave them open they’re going to beat you, and that’s what they did tonight.”

“We’ve put in a ton of work in the offseason,” said McLaren, who is now up to 802 career points and has continued garnering Division 3 college interest. “Everyone’s got their shots up every day, and that’s the sort of team we are this year, we like to hit threes and drive to the hoop.”

In addition to Cleary’s 21 points and 9 rebounds, Peter Lopata also had 11 points for the Sachems and Kamuda added 10, including the two huge threes.

With the win, Newburyport (9-3) has now won seven straight games, while Pentucket (5-5) has lost four in a row after starting the season 5-1. The Clippers will look to solidify their hold on the CAL Kinney Division lead Friday at 6:30 p.m. against Triton, while Pentucket will be at North Reading on Friday at 7 p.m.

Etter out for season

What was feared as an unfortunate possibility has been confirmed, Pentucket’s Jake Etter has a torn ACL and will miss the remainder of his senior year. One of the Merrimack Valley area’s top three-sport athletes, Etter was coming off a historic football season and looked set to earn all-star honors on the basketball court once more. Before going down with his injury against Masconomet on Jan. 3, Etter was averaging 10.4 points per game and the Sachems were 4-1 on the season. Since then Pentucket has skidded to a 1-4 record without him and the Sachems now face a tough road back to the postseason.

Newburyport’s 3-point shooters weren’t the only ones to catch fire on Monday afternoon. Prior to the start of the varsity game, the entire school was evacuated after the fire alarm began sounding with roughly a minute left in the JV game. The moment you stepped into the hall it became clear why — the popcorn machine in the concession booth had gotten jammed, burning the kernels inside and filling the entire hallway with the stench of burnt popcorn. The delay lasted about 10 minutes, after which point the crowd was let back inside and the final seconds of the JV game were played. Pentucket JV wound up holding on for an exciting 65-63 win in front of a standing room only crowd, and between the late finish and the fire alarm delay, the varsity game didn’t end up tipping off until a half hour after its originally scheduled time.

Newburyport, MA - Christine P. (Rudzinski) Demski, age 70, of Newburyport, died February 15, 2020, at Anna Jaques Hospital in Newburyport after a courageous battle with pancreatic cancer. Born in Bayonne, New Jersey, June 5, 1949, she was the daughter of the late Harriet (Jancewicz) Rudzinsk…