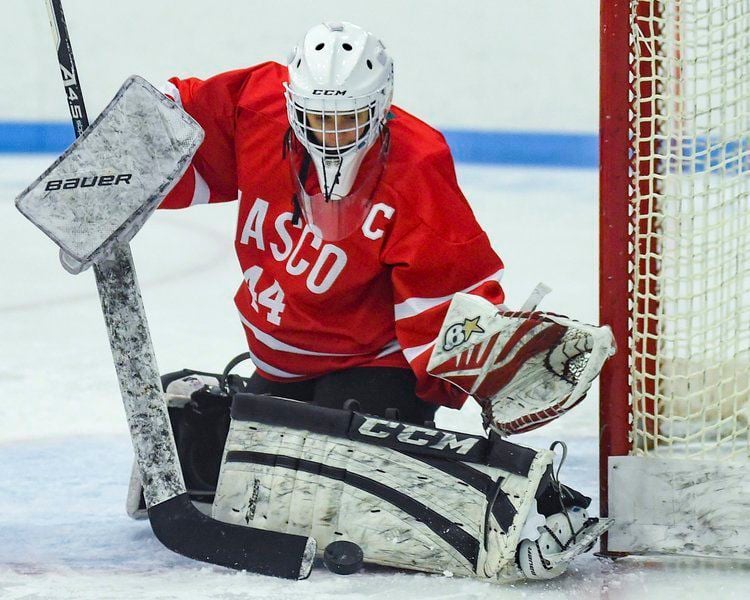 JAIME CAMPOS/Staff photoMasconomet goalie Molly Elmore is in a unique position, breaking some of the records set by new assistant coach Alex Jones when she played. 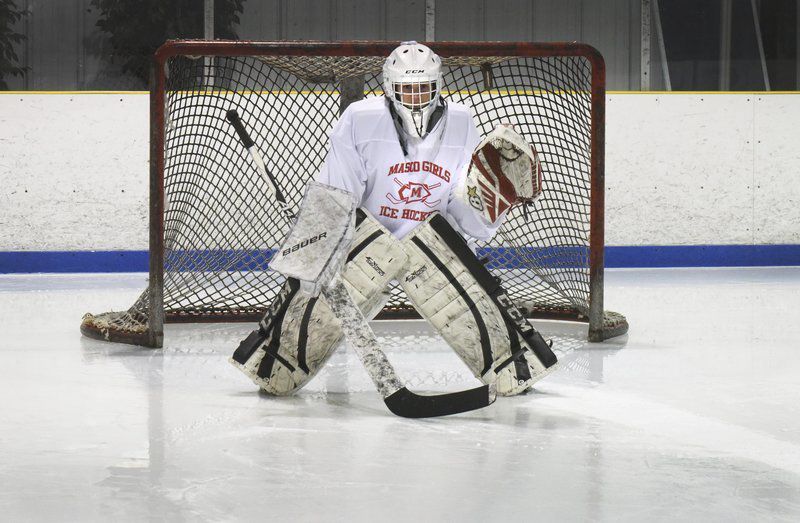 BRYAN EATON/Staff photoMasconomet goalie Molly Elmore has a unique relationship with the team’s new assistant coach, since both are Chieftain record setting netminders. 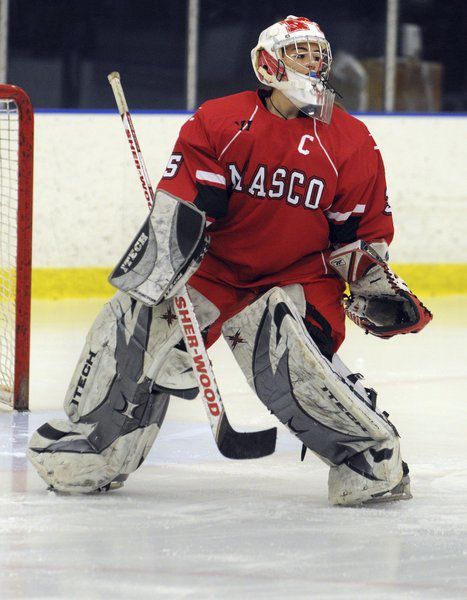 JAIME CAMPOS/Staff photoMasconomet goalie Molly Elmore is in a unique position, breaking some of the records set by new assistant coach Alex Jones when she played.

BRYAN EATON/Staff photoMasconomet goalie Molly Elmore has a unique relationship with the team’s new assistant coach, since both are Chieftain record setting netminders.

It takes one to know one.

That might be the best way to describe how Masconomet’s new assistant coach, Alex Jones, became fast friends with the team’s All-State goalie, Newburyport’s Molly Elmore.

There aren’t many people that can understand exactly what Elmore is feeling at any given moment in a game or practice, but Jones is at the top of that short list. It wasn’t that long ago that she was the one standing in the blue paint facing down any number of opposing shooters while minding the Chieftain net.

The Salem News Player of the Year in 2013, Jones had been hoping to get into coaching for a few years but had to prioritize nursing school. This winter she finally had time to commit to joining coach Ryan Sugar’s staff. Working with Elmore, a four-year starter heading to Sacred Heart next year, had been a joy.

“When I was in college I’d follow the team and hear from friends and family how comparable we were, how we had the similar styles of play,” Jones said after a recent practice, “and now coaching Molly, she’s amazing. As good of a goalie as she is, she’s an even better kid.”

The Chieftains (6-2) benefit hugely from Elmore’s consistent play in the net. She’s in the process of breaking a lot of Jones’ career program records: Elmore now has 48 wins (Jones earned 44) and inched over Jones’ program record for save percentage (.939) with a .944 in 2018.

“It’s been great to have someone that can relate,” said Sugar. “I’m not a goalie, so I tend of kind of leave them alone. Alex has been a great addition and it’s pretty cool that the two record holders for our program are here at the same time.”

The goalie position is so unique that coaches often leave their netminders to their own devices when it comes to specific pointers. Being able to bounce ideas off a fellow goalie is a welcome change.

“She knows what’s going on in my head and she understands what I’m thinking about,” said Elmore. “It’s fun in practice being able to do drills off to the side with her. If there’s part of my game I need to work on, she has ideas on how we can transfer that into a drill.”

To the layperson, stopping the puck looks easy. To a goalie, there’s so much detail that goes into positioning, angles, compensating for defensive coverage that every save or puck that gets by contain more than meets the eye. A fellow goalie sees things that the rest of us would miss.

“I can tell when she’s not happy,” Jones said. “From my point of view, the best thing I can give her is being nit-picky with practice. I can see those little details that only she could know about; the other day we pointed out an angle and our other coach, Rachael Duval, said that never happened in a game before. Sure it enough it happened the next game and Molly made the save.”

As a three-year all-star with a Division 1 college opportunity, Elmore came into her senior season looking to meet, and exceed, that high bar. She spent the summer honing her skills Mike Buckley’s GDS in New Hampshire and then played in the Collegiate Prospects Combine at Masco’s home rink in Haverhill for the fall.

“It’s almost all prep school girls and recruited athletes,” Elmore said. “The shots you’re facing are so good, the training is so good. It was a great experience and a lot of fun.”

The mental side of tending the goal can be as tough, or tougher, than the physical skills. Whether its shaking off a tough period, refocusing after a long stretch of play at the other end of the ice or handling the pressure of a tight situation, donning the pads requires a special demeanor.

“So much of the game is mental,” said Elmore, who had an 1.79 goals against average in 88 career starts with 14 1/2 shutouts entering Wednesday’s game against Methuen-Tewksbury. “There is that pressure and expectation of trying to be as good as I was, or even better. At the end of the day, I’m playing hockey. Having fun and doing my best is the best way to me to play how I know I can play.”

One other quirk of playing goal for a girls high school team is that you often walk alone. Masco never had a back-up goalie during Jones’ five years as the starter when she played 101 games and made 2,475 saves. She and Elmore have been working with apprentice Lydia Willette, a junior who first took on the position in last year’s state tournament.

“I was a figure skater. Going into the tournament, we need to have a second goalie on the bench and I thought why not try it?” said Willette, who made her first varsity save earlier this year. “It can be awkward with all the pads on. There’s a lot of balance and skating that translates and works well for me.”

For practice, having two players in goalie pads is a major advantage. It’s much better for the skaters to do drills with multiple human goalies as opposed to tying a “shooter tutor” to an empty net when a team has just one keeper on the roster.

“It’s been a big help for my stamina. It’s to play a big game and then come back to practice the next day and take every single shot,” said Elmore. “it’s so much having two of us.”

From Willette’s point of view, there’s no better example of learning from the best than her team’s two record holding goalies.

“The biggest thing I get from them is confidence,” Willette said. “Working with them, it’s a feeling of ‘I can do it. I can actually do it.’”

Heading into their toughest stretch of the year, Masco is hoping to hit its stride. Following Wednesday’s tough loss to the Red Raiders, a road game with an always-tough Andover awaits, followed by a trip to Shrewsbury with a potential league championship game against Peabody sandwiched in between.

With an excellent defense led by captain Meghan McElaney of Amesbury and improving depth up front, the Chieftains have big goals. They’re taking it day-by-day led by their rock in net.

“There’s always something you can improve on,” Elmore said. “I know I’m not perfect or anywhere close to there. The biggest thing is just to play our best and focus on the hockey.”

More good news for the Chieftains, junior forward Erin Irons of Georgetown should be back from an extended illness soon. One of Masco’s most experienced skaters, the Georgetown native will be a major scoring threat once she gets her skating legs back under her.