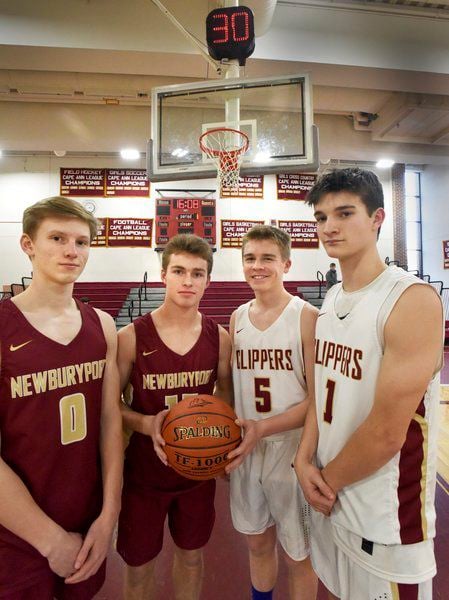 BRYAN EATON/Staff photoNewburyport basketball sophomores Jack Fehlner, Max Gagnon, Finn Sullivan and Ronan Brown have emerged as key players on a Clipper team that is once again contending for a CAL title. 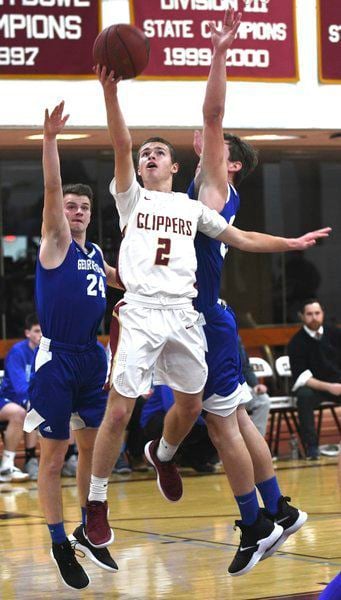 JIM VAIKNORAS/Staff photoNewburyport’s Max Gagnon drives past Georgtown’s Brendan Willis and Mike Lundquist during last year’s Rowinski Holiday Tournament championship game. Now a sophomore, Gagnon is among four promising sophomores who have already made an impact on this year’s team.

BRYAN EATON/Staff photoNewburyport basketball sophomores Jack Fehlner, Max Gagnon, Finn Sullivan and Ronan Brown have emerged as key players on a Clipper team that is once again contending for a CAL title.

JIM VAIKNORAS/Staff photoNewburyport’s Max Gagnon drives past Georgtown’s Brendan Willis and Mike Lundquist during last year’s Rowinski Holiday Tournament championship game. Now a sophomore, Gagnon is among four promising sophomores who have already made an impact on this year’s team.

Newburyport had gone 13 years between Cape Ann League titles before last year’s team finally broke through. Even with the graduation of Casey McLaren, the program’s all-time leading scorer, this year’s team looks set to repeat after starting 7-0 in the league entering last night’s game.

But what happens after you reach the top of the mountain? Are the Clippers destined to fall off, as many championship teams often do?

If Newburyport’s four sophomores have anything to say about it, the Clippers won’t be going anywhere anytime soon.

Jack Fehlner, Max Gagnon, Ronan Brown and Finn Sullivan have all emerged as contributors to what is looking like the runaway favorite to win the CAL Kinney Division title. On a roster where all 15 varsity players regularly see the floor, the four underclassmen have carved out important roles, with Fehlner and Gagnon in particular emerging as the team’s top options at point guard.

Fehlner has been the most productive of the bunch overall, averaging 6.8 points per game while knocking down 13 3-pointers. He recently scored a career-high 20 points against Georgetown, a night that also saw Gagnon break through offensively.

Despite having served as the back-up varsity point guard as a freshman, Gagnon rarely shot and primarily served as a distributor at the beginning of his career. In that big 90-72 win, however, he went for a career-high 13 points and has averaged 8.3 points per game ever since. Prior to that, Gagnon’s season high was just two points.

“I think it brought our confidence up offensively,” Gagnon said. “A lot of people hit shots and scored a bunch, and we haven’t slowed down since.”

Fehlner, Gagnon and Sullivan have all been playing together since they were in fourth grade, and having the chance to share the court on varsity has been a dream of theirs for years now.

Brown, however, has followed a much different path.

A Newbury resident, Brown actually grew up playing against his now-Clipper teammates. Having played in the Triton youth system, Brown used to play against the Clippers before eventually leaving to attend St. John’s Prep for his freshman year.

“I knew all these guys through youth sports and I knew Newburyport was a great school, and when I was younger I did all the youth camps with coach Clay at Triton,” Brown said. “I knew he was a great coach and it was an easy decision.”

Brown had no trouble adjusting to his new surroundings, however, as he and virtually the entire varsity roster all got together regularly over the summer. Playing both organized offseason ball in the Hoops for Hope summer league and pick-up ball down at Cashman Park, the Clippers all acclimated to their new roles, which helped things go much more smoothly once the winter season began.

“The summer hoops definitely helped a lot, it helped us get the pace before we started the season, that way we’re used to everything,” Fehlner said. “Because most of us play other sports so it’s good that we’re not rusty come season time.”

Now, after a couple of early setbacks, the Clippers look strong as ever.

“From the bumpy start we had it was a confidence thing and learning what everyone’s roles are, but once we found it we’ve rolled with it,” Sullivan said.

What a start it’s been for the Amesbury girls basketball team. Heading into tonight the Indians are a perfect 9-0 on the season, having outscored opponents by an average of 20.6 points per game.

Alli Napoli (12.8 points) and Avery Hallinan (11.5 points) have been good as expected, but the biggest surprise has been sophomore Gabby Redford, who is coming off a career-high 19 points in Tuesday’s win over Triton. The sophomore has now topped double figures three times in the last five games, helping bring her to 7.9 points per game on the season. Izzy Cambece (6.0 points) also had 18 points in that one, and the Indians are starting to look like the runaway favorite in the CAL Baker Division.

That being said, there are still big tests ahead for the Indians.

On Tuesday, Jan. 28, Amesbury will face defending state champion Pentucket (8-1) in what is looking like the area’s best game of the season. Then, the following Tuesday, the Indians will host Masconomet (7-1) in another key game leading into next month’s state tournament.

After starting the season 0-5, Georgetown boys basketball had a lot of ground to make up in order to get back into the tournament discussion. Much of that early start could be chalked up to tough competition and bad luck, however, so it shouldn’t be a surprise that the Royals have bounced back with three wins in their last four games.

Georgetown’s big three of Jack Lucido (14.6 points), Justin Murphy (13.8 points) and Harrison Lien (13.8 points) have all been great during the team’s recent surge, with Lucido in particular averaging 19 points over the past four games. The Royals have also continued their historic 3-point shooting pace, with Georgetown having now made 92 threes on the season, good for an average of 10.2 made threes per game.