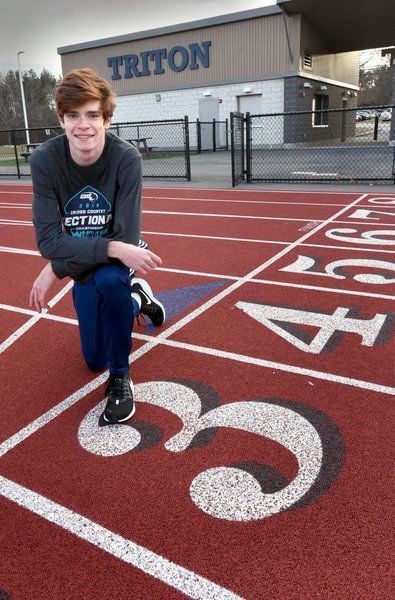 BRYAN EATON/Staff photoTriton track star Graham Stedfast has set new school records in the mile for both indoor and outdoor track and is emerging as one of the school’s all-time distance running greats. 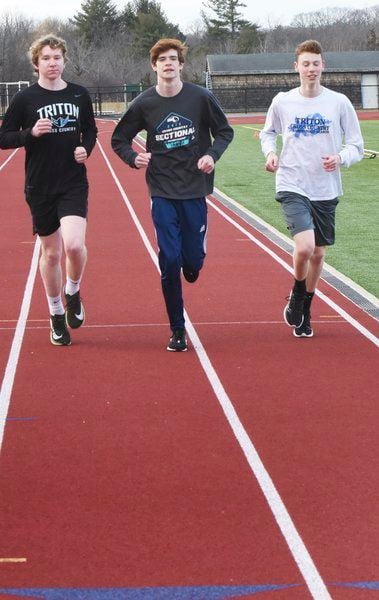 BRYAN EATON/Staff photoTriton track star Graham Stedfast has set new school records in the mile for both indoor and outdoor track and is emerging as one of the school’s all-time distance running greats.

Joe Colbert always knew Graham Stedfast had the potential to be great. As one of the chief architects of the Triton Regional Middle School track program’s ascension to statewide powerhouse, Stedfast came into high school as one of the track program’s most promising prospects in years.

What that success ultimately looked like, however, proved a surprise to everybody.

“He came to high school thinking he wanted to be a sprinter, that’s what he did in middle school,” Colbert said. “He didn’t have a fall sport so he came out for cross country, and we all discovered that he has real talent for distance running.

“Now he’s got all the mile records,” Colbert added.

In a region known for producing some of the top distance runners in the state, the Triton junior has emerged over the past year as one of the best of them all. Last spring as a sophomore, Stedfast helped the boys outdoor track team win its first-ever Division 4 championship, placing third in the mile in 4:27.37 to break a school record that had stood since the late 1970s.

Then in the fall, Stedfast firmly established himself as one of the Cape Ann League’s best, finishing second at the CAL cross country championships ahead of elite distance competitors like Pentucket’s Peter Lopata, Manchester Essex’s Will Kenney and Masconomet’s Sebastian Gilligan.

“That was my breakout race,” said Stedfast, who would later go on to place fifth at the Division 5 meet and 13th at Division 2 All-States. “We have great runners in the CAL so to come second in that race gave me the confidence that I could run with some of the better guys in the state.”

Stedfast has only gotten better this indoor season. Recently he broke Triton’s 13-year-old indoor mile record, running a 4:27.80 to place sixth at the Northeast Invitational. That is also the best mile time run by a Greater Newburyport athlete this winter, and Stedfast also holds top five marks in the 2-mile (2nd, 10:33.36) and 600 (5th, 1:32.14).

“When I saw the seedings I knew that there were some fast runners there,” Stedfast said of his record run, noting standouts like Arlington Catholic’s Sean Kay. “So I knew if I could hold on for 1,200 meters, the speed would be there and the time too, so I was really racing for position and the time came with it.”

Stedfast’s pure speed has been one of the biggest factors in his success as a miler. With a background in sprinting, Stedfast has the quickness to compete with the fastest around but also the endurance to maintain that pace far longer than most. While he hasn’t quite nailed down the ideal pace for the shorter 1,000-meter run or the longer 2-mile, Colbert said Stedfast is a special talent who has the potential go down in history as one of the area’s all-time greats.

“Our goal for Graham is to get down into the low four minutes as a senior, which is an ambitious goal, but he has a rare combination of speed and endurance,” Colbert said. “He’s still just a junior but we’re hoping to get him down to 4:10 or lower.”

To run a time like that would elevate Stedfast to a level occupied only by guys like Newburyport’s Nick Carleo, a former high school All-American. And while Stedfast isn’t there yet, he is on track to at least achieve his more immediate goal of contending for a state championship. His school record time would already have been good enough to place second at last year’s Division 4 state meet, and he is only about four seconds off the New Balance Indoor Nationals qualifying standard for the emerging elite mile (4:23.0) as well.

As an added bonus, Stedfast is also just one of a number of talented Triton athletes gracing the track this winter. The Vikings currently stand atop the CAL standings at 3-0-1, having tied fellow unbeaten Newburyport in their thrilling dual meet 43-43 thanks in large part to Stedfast’s photo finish victory in the mile over reigning CAL cross country champion John Lucey.

The Vikings will be among the favorites at both the CAL and Division 4 state meets, and for Stedfast, being able to contribute to that level of team success has made the entire experience that much sweeter.

“It’s been awesome, just knowing that we can go into any meet and have a chance, it definitely makes things more fun,” Stedfast said. “And to be able to score points for the team is the best feeling.”