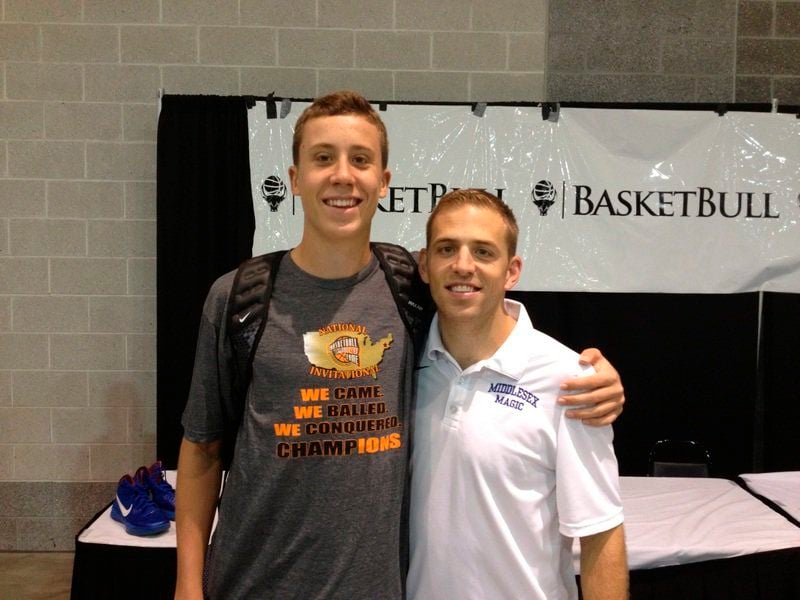 Courtesy photo. Duncan Robinson, left, poses with his former coach Mike Crotty of the Middlesex Magic — well before he was a starting forward for the streaking Miami Heat. 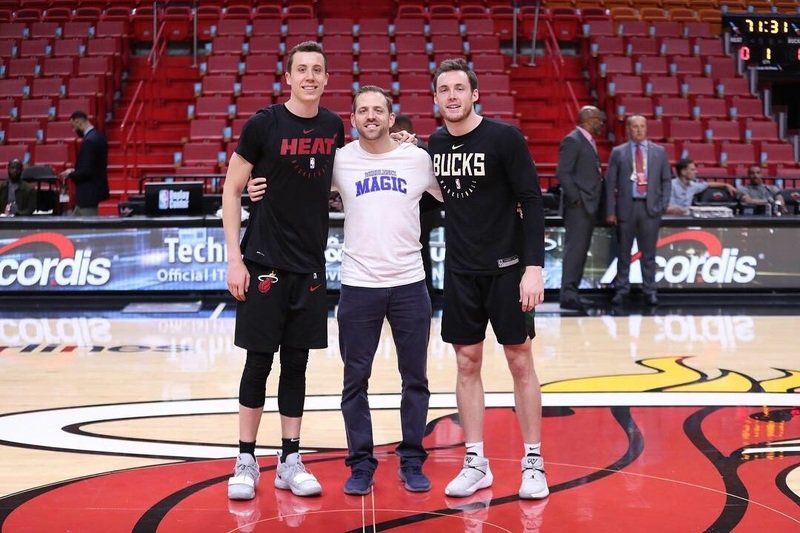 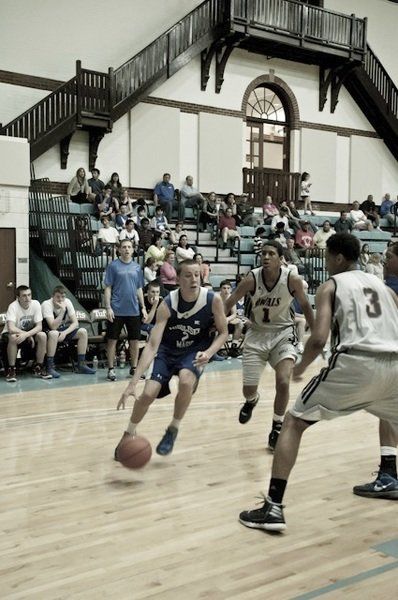 Courtesy photo.Miami Heat swingman Duncan Robinson drives to the hoop during his AAU days with the Middlesex Magic. 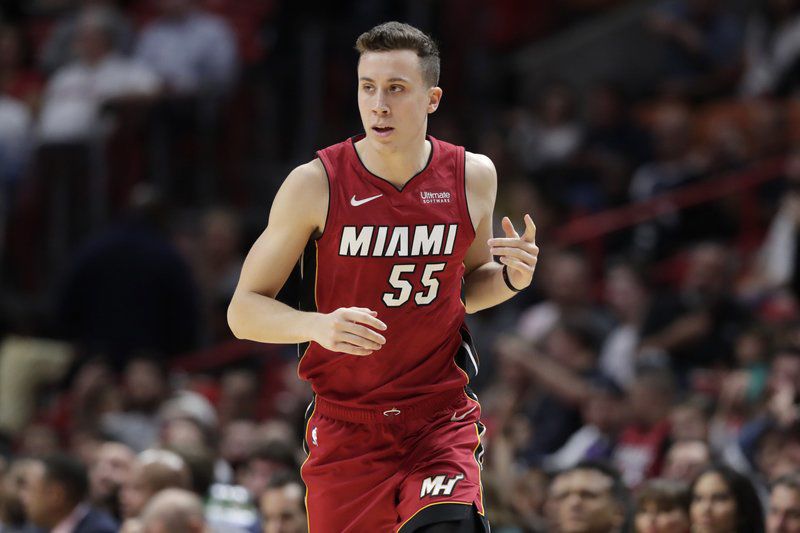 Miami Heat forward Duncan Robinson (55) reacts after shooting as three-pointer during the first half of an NBA basketball game against the Cleveland Cavaliers, Wednesday, Nov. 20, 2019, in Miami. (AP Photo/Lynne Sladky) 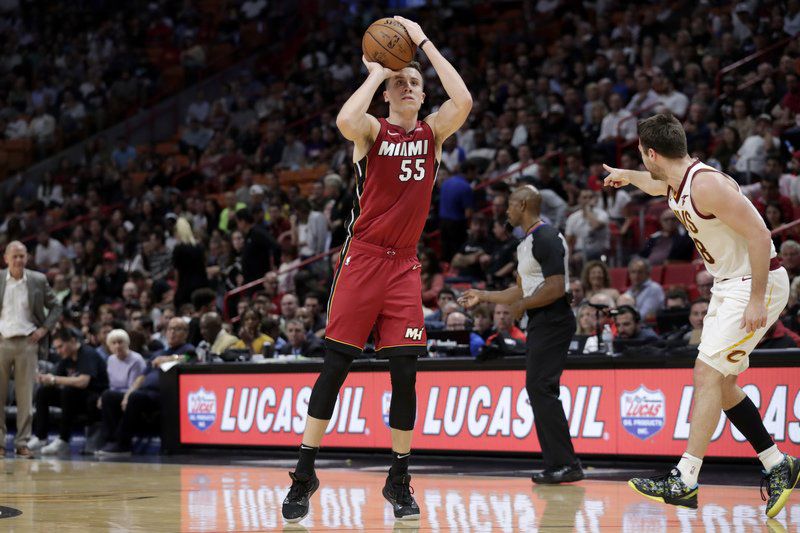 Courtesy photo. Duncan Robinson, left, poses with his former coach Mike Crotty of the Middlesex Magic — well before he was a starting forward for the streaking Miami Heat.

Courtesy photo.Miami Heat swingman Duncan Robinson drives to the hoop during his AAU days with the Middlesex Magic.

Miami Heat forward Duncan Robinson (55) reacts after shooting as three-pointer during the first half of an NBA basketball game against the Cleveland Cavaliers, Wednesday, Nov. 20, 2019, in Miami. (AP Photo/Lynne Sladky)

Every professional basketball player follows a different path in writing their own story.

From the highly recruited high school phenom destined for stardom, to the late blooming marksman grinding every day in an attempt to reach peak professionalism, the NBA is a league defined by its varying athletes.

But of the roughly 450 names across the association, not many can match the intriguing journey of Miami Heat swingman Duncan Robinson — a truly inspiring ride that includes stops at a Division 3 college and the University of Michigan before going undrafted.

Today, he’s a key member of one of the top teams in the Eastern Conference, earning his spot by continuously putting in work and gradually climbing the ranks. The 25-year-old wasn’t wasn’t always the most athletic player on the court, nor was he the biggest, strongest or fastest. But Robinson has been able to build his game around his knockdown shooting, impressing scouts, coaches and opposing players along the way.

Most recently, Robinson erupted for a career-high 34 points including 10 triples in Tuesday’s comeback overtime win over the Atlanta Hawks. His 10 3-balls tied a Heat franchise record for most in a single game.

“Anybody who says that they saw this all unfolding exactly as it did would be lying,” Robinson’s former AAU coach and good friend Mike Crotty said. “He’s always been a great shooter and he’s always worked incredibly hard at his craft; I used to tell him he’s the best shooter I’ve ever coached. But I’m not going to sit here and say from the day I met him that I thought he’d be going to the NBA. That just wasn’t the case.”

Growing up in nearby New Castle, New Hampshire, Robinson’s affinity for hoops began at a young age. By the time high school rolled around, the then 5-foot-7 point guard found his way to Newbury, Massachusetts where he would attend Governor’s Academy.

While he didn’t immediately make an impact at the private high school, Robinson worked his way up the rotation and by his senior year was averaging 18.5 points per game.

Accepting the fact that he still had plenty of room to grow — both on the court and in stature — Robinson opted for a post graduate season at Phillips Exeter Academy while fine tuning his skills in the offseason as a member of Crotty’s Middlesex Magic AAU squad.

By that point, Robinson had blossomed from an undersized and scrawny point guard to a towering 6-foot-8 forward. He dropped 24 points and grabbed 10 rebounds in his final game at Phillips, taking home MVP honors as his team was crowned New England Prep School Athletic Council (NEPSAC) Class A champions.

Despite his impressive performances over the course of the winter, Robinson still failed to receive any Div. 1 offers. Nonetheless, he remained humble and determined.

“I’m just appreciative of every basketball experience I’ve had, whether it be something at Governor’s or (Phillips) Exeter or Williams (College) or anywhere in between,” said Robinson. “I think what sticks out to me most is the relationships and the people I’ve met and been able to connect with along the way. One of the most special things for me is that each place that I’ve moved to the people from the previous place have been nothing but supportive, loving and encouraging.”

As Robinson mentioned, the next stop on his trip to the top was Division 3 Williams College.

All he did there was average 17 points and 6.5 rebounds on a remarkable 55.7/45.3/87.8 shooting split. He was named NESCAC Rookie of the Year and guided the Ephs to the Division 3 national championship game where he scored 17 points despite being regularly trapped and double teamed in a two-point loss. He had scored 30 in a national semifinal win over Amherst the night before.

“After that year at Williams, it was pretty evident that he belonged at a higher level ... and then the chain of events started “ said Crotty. “His head coach leaves to become head coach at Marist and wanted Duncan to go with him on a scholarship, but Duncan respectfully declined. Davidson, Boston College and Michigan really honed in after that.”

Robinson ultimately chose Michigan, and while his stats were never among the nation’s best, he became a valuable piece of the rotation and one of the best overall shooters in the country. After red-shirting the 2014-15 season Robinson averaged 9.3 points on 45.5/41.9/86.4 shooting splits over three seasons, helping the Wolverines reach the Div. 1 National Championship during his senior year in 2018.

Still, he was overlooked and under appreciated.

Robinson went undrafted in the ensuing 2018 NBA draft, but managed to sign a Summer League contract with Miami. A few strong outings in the Summer League landed him a two-way contract with the Heat and Sioux Falls Skyforce of the G-League. He played just 15 games (one start) with Miami that year, but it was enough to land him a regular contract heading into the 2019-20 campaign.

The rest is history.

“Every time a GM or assistant coach asked me about Duncan I would always say he’s one of the best shooters I’ve ever shot with, and I’ve shot with a lot of great ones,” said Milwaukee Bucks’ guard Pat Connaughton, who’s worked out with Robinson many times over the years after becoming close with him through Crotty and the Magic.

“I think technically besides a handful of people, anybody that gets to the NBA the numbers are never in your favor. It’s not something you’re destined to do and obviously when (Robinson) committed to Williams it’s not something that many people thought he would do, either. But he always took the opportunities when they arose and took advantage of them and I think that’s the biggest thing for him.”

In his first season as a full time NBA player, Robinson has gone from little known sharpshooter to versatile starter for a Heat team that currently sits third in the Eastern Conference standings.

Prior to Tuesday’s offensive explosion, he scored a then-career-high 29 points with nine 3-pointers (eight in the first half) in a November win over Cleveland, and has followed that up with double-digit scoring efforts in six of his last eight games. His shooting clips have yet to take a dip since his high school and college days, coming in at an impressive 45.9/42.5/93.8 at the moment.

But Robinson’s not just a shooter anymore; he can rebound (he pulled down 10 boards in a recent win over Brooklyn), he can defend, and he rarely makes mistakes. His remarkable shooting ability will always be what he’s known for, but he’s swiftly becoming a more complete NBA player in today’s three-and-D heavy league.

“I’ve been working with him for two years now and over that time his growth has been exponential,” said Miami assistant and shooting coach Rob Fodor. “We’ve had to make a lot of changes to get him to this level, and he’s grown not just as a shooter but as a basketball player entirely. His work ethic is second to none.”

Robinson is part of a young Heat core that includes undrafted rookie Kendrick Nunn and fellow rookie Tyler Herro, a former star at Kentucky. According to Fodor, the trio is constantly challenging one another and feeding off each other’s energy and will to improve. Collectively, they’ve helped the Heat go from middle of the road playoff squad to true conference contenders.

“They’re just really enjoying each other,” said Fodor. “Kendrick was just voted Eastern Conference Rookie of the Month, they’ve all had some big games and they’re always the first ones to turn to each other. They feed off each other and that’s been really cool to watch. Everyone on our team loves Duncan and I think people can really appreciate a guy that works his (tail) off and proves they belong.”

So just to recap, Robinson has gone from low prospect guard, to flourishing high school standout, to Division 3 college superstar, to Division 1 college shooting specialist, to undrafted rookie making a name for himself in the G-League, to starting forward of the Miami Heat.

Not bad for a small town New Hampshire native.

“Every kid that loves basketball dreams about going to the NBA. But for me, it was never a guarantee obviously or even a realistic possibility there for a little while,” admitted Robinson. “Honestly, it wasn’t even something I was working towards. For me it was just about maximizing every opportunity. I never expected anything, just bought into the day to day, enjoyed it and tried to make the most of it.”

Robinson made it to TD Garden last week as his Heat took on the Boston Celtics. He scored 10 points and grabbed five rebounds in 29 minutes of a 112-93 loss.

For him, it was another beautiful chapter to his far-from-over hoops story.

“I just view it as another milestone,” he said. “Being able to compete in this arena, an arena I was fortunate enough to come to a couple of times as a kid and watch the Celtics play, is unbelievable. I grew up a Celtics fan so to be able to be here and compete and just be on the floor that I watched as a kid growing up is pretty surreal.”