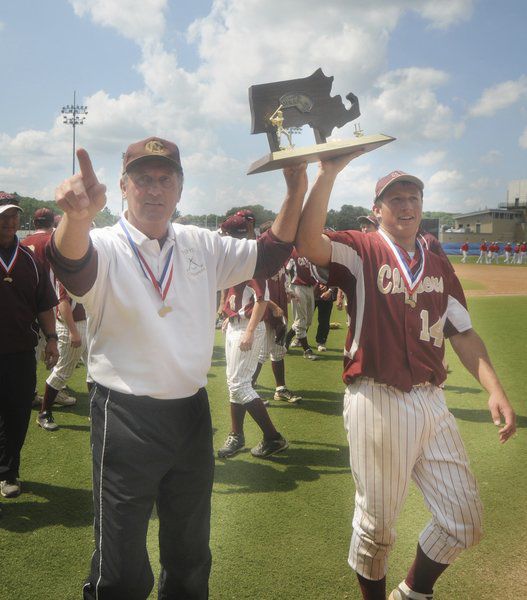 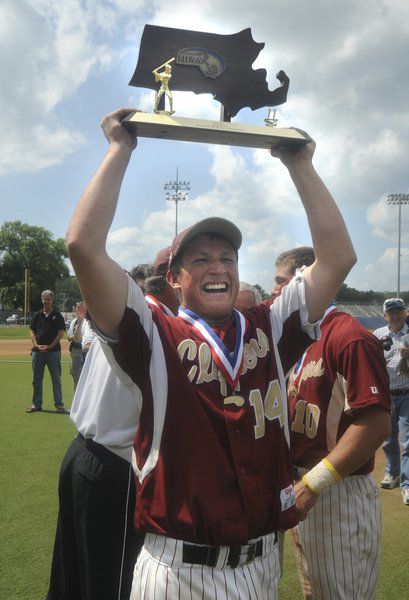 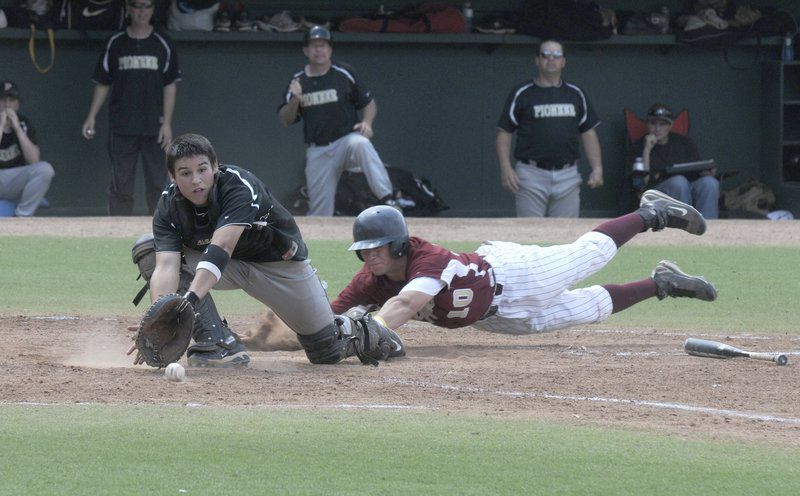 JIM VAIKNORAS/Staff photoNewburyport's Matt Mattola slides safely in to home plate as Pioneer Valley's catcher waits for the throw in the 2011 Division 3 state championship game. The Clippers would go on to win 9-4 to claim the first state title in program history.

JIM VAIKNORAS/Staff photoNewburyport's Matt Mattola slides safely in to home plate as Pioneer Valley's catcher waits for the throw in the 2011 Division 3 state championship game. The Clippers would go on to win 9-4 to claim the first state title in program history.

Editor’s Note: With the start of the high school spring season delayed until early May, we are taking a look back at some of the greatest moments in Greater Newburyport sports history. For today’s Throwback Thursday feature, we are reprinting the Daily News’ coverage of Newburyport baseball’s 2011 state championship victory originally published on June 20, 2011.

LYNN — Newburyport baseball coach Bill Pettingell spent 40 years saying he didn’t need a state championship to validate his career, and he wasn’t about to change his mind Saturday.

The timing of the accomplishment couldn’t make for a better story. The 40-year coach who has led teams to 615 wins, 18 Cape Ann League titles, three sectional titles and two state-title game appearances will walk away on top, earning his first outright state championship in the final game before his retirement.

You could say it was the one thing missing from a coaching career that earned Pettingell a trip to the Mass. State Baseball Coaches Hall of Fame 14 years ago. Just don’t expect the former Natick High All-Scholastic pitcher to agree.

“I don’t like those terms,” Pettingell said. “Don’t get me wrong. If on the first day of practice, you had said you can have a Cape Ann League championship or a state title — one or the other — I’d take the Cape Ann League title. That’s the way it’s always been.”

It’s a stance the coach has developed after coaching so many great players and teams over the last 40 years. The man who changed the culture of baseball in the area will someday soon have the high school baseball field at Newburyport High School named in his honor.

From Pettingell’s perspective, to claim that his career was incomplete without a state title would be to slight all of his former players.

“I’ve had great teams, but nobody played this well under fire for six straight games,” Pettingell said. “People keep telling me I’m crazy, but I sincerely believe a Cape Ann League title is what we start the season to win. Anything else is gravy. We’ve had some very bad luck in the North finals and state finals. Bad things can happen in this game — bad bounces, sun in the eyes, outfielders running into each other. The true mark of a great team is winning the league with the 18-game schedule.”

Those closest to Pettingell knew better.

Saturday’s game drew the largest Newburyport crowd in at least five seasons. The bleachers along the first-base line were packed with Pettingell’s former players from the 1970s, 1980s, 1990s and 2000s. In fact, some of the players from his first teams have since had sons come through the Newburyport High program.

Pettingell’s wife, Libby, paced up and down the aisles and never truly found a place to settle in seven innings. Kevin Doyle and David Brown represented Pettingell’s first varsity team in 1972 in the bleachers, along with some of the Newburyport all-time greats like Skip Short and Mark Rowe.

Fittingly, Pettingell’s lead assistant Steve Malenfant was the first one to congratulate the coach after right fielder Sam Barlow secured the final out. Malenfant played junior varsity under Pettingell in the coach’s first year in the Newburyport program in 1970. He then captained Pettingell’s first varsity team in 1972. He has been a Newburyport assistant for the last five seasons.

“It was very emotional (Friday) during his last practice,” Malenfant said. “He was very emotional for the same reason (Saturday). I snuck a glance at him before the last out, and he had tears starting to come. He’s going out with a state championship. How can you beat that?”

Pettingell spent Saturday’s entire game standing outside of the home team’s dugout, working the umpires, motivating his players and putting the pressure on the opponent through hit-and-run calls, stolen-base attempts and a steady stream of bunts. It was a manufactured victory, one without a home run or multiple-RBI hit from any one player.

Pettingell didn’t feel any specific need to win Saturday’s game to validate his 40-year career. He simply wanted to win because he always wants to win.

“He’s never content,” Malenfant said. “He’s a competitor. That’s the thing, he competes every single game. Even (Saturday), the fire was still there. That’s what makes him special. He always lifts us up.”

One last Pettingell story for the road: Newburyport held a comfortable 7-2 lead on Saturday through four innings, and a state-championship appeared to be inevitable with junior Brett Fontaine (11-1 record, 1.20 ERA) on the mound.

Fontaine hit a rough stretch over the next two innings, allowing two runs in the fifth, and two walks and a single in a scoreless sixth. With the Clippers holding a 7-4 lead heading into the bottom of the sixth, Pettingell had his other ace, senior Ryan O’Connor, jog down the right-field line to warm up his arm for a potential seventh-inning appearance on two days’ rest.

Fontaine urged Pettingell to let him finish the game. Staked to a 9-4 lead in the top of the seventh, the junior right-hander got the call for the final inning, and he retired the side in order.

“Coach was trying to get me fired up for the last inning,” Fontaine said. “He wanted me to finish it; I knew he did.”

Pettingell made a decision last offseason to retire after this season, and as he exited the field Saturday, he said he’s “going to live it.”

If that’s the case, Pettingell found a way to push his players’ buttons until the final out.

“I lived a dream for 40 years,” Pettingell said. “I came to Newburyport to start doing baseball, based on a feeling I had for my idol, John Carroll (longtime Natick baseball coach). I knew I wanted to be him — somebody who spent his life at an institution like Newburyport.”