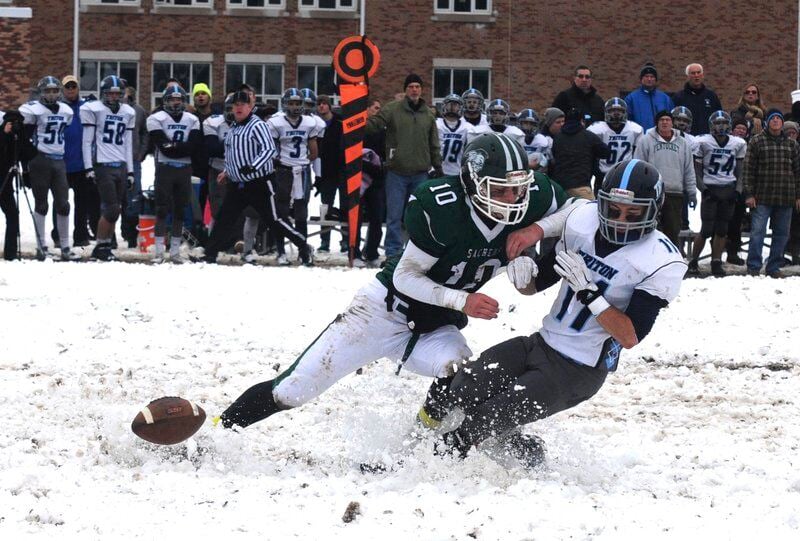 JIM VAIKNORAS/Staff photoPat Freiermuth, then a sophomore at Pentucket, delivers a big hit to Triton's James Wood during the 2014 Thanksgiving Day game. 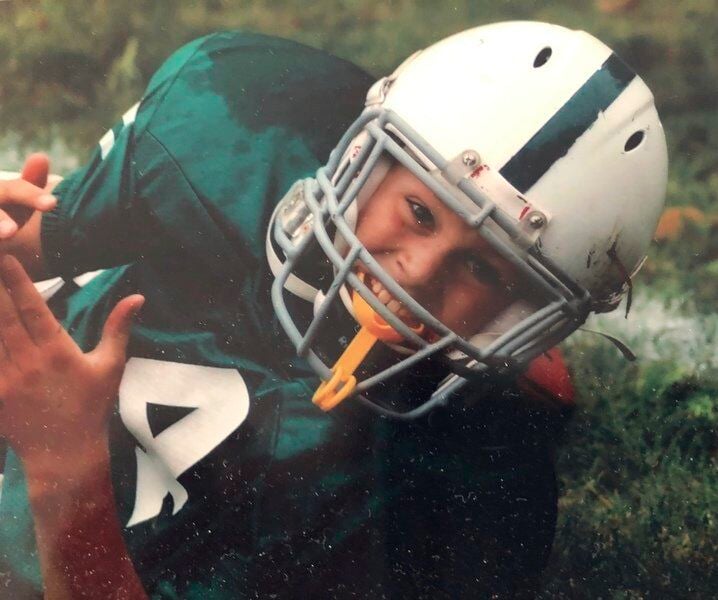 Courtesy PhotoPat Freiermuth during his youth football days, long before he became a star tight end at Penn State and an NFL Draft prospect. 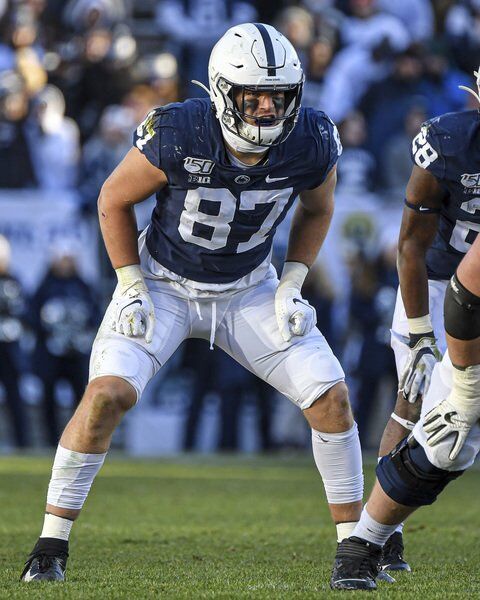 Courtesy of Penn State AthleticsMerrimac's Pat Freiermuth is expected to be an early-round selection in this week's NFL Draft after a stellar college career at Penn State. 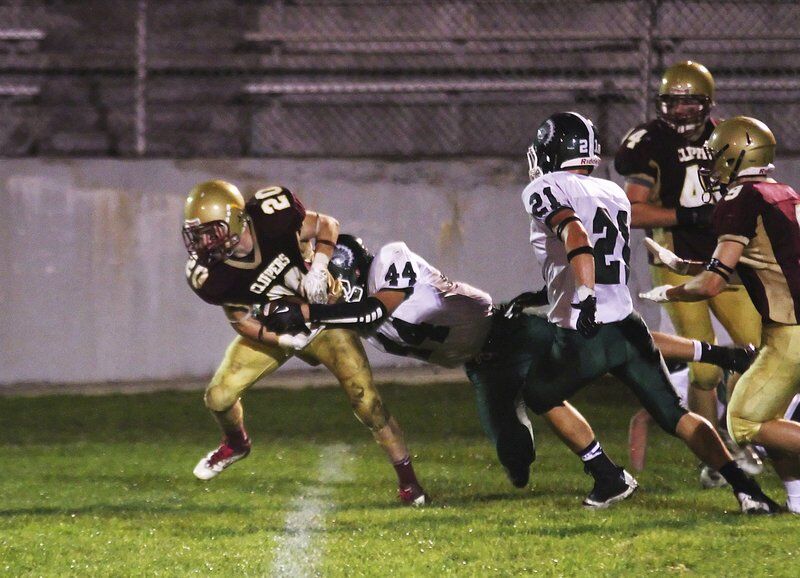 Ben Laing photoPat Freiermuth, then a freshman at Pentucket in 2013, drags down Newburyport's Ethan Northey during one of his first high school football games.

JIM VAIKNORAS/Staff photoPat Freiermuth, then a sophomore at Pentucket, delivers a big hit to Triton's James Wood during the 2014 Thanksgiving Day game.

Courtesy PhotoPat Freiermuth during his youth football days, long before he became a star tight end at Penn State and an NFL Draft prospect.

Courtesy of Penn State AthleticsMerrimac's Pat Freiermuth is expected to be an early-round selection in this week's NFL Draft after a stellar college career at Penn State.

Ben Laing photoPat Freiermuth, then a freshman at Pentucket in 2013, drags down Newburyport's Ethan Northey during one of his first high school football games.

When Ryan Kuchar first met Pat Freiermuth, the future Penn State football star was still just an energetic middle schooler who would sometimes tag along with his older brother Tim.

But even back then, and especially after he arrived at Pentucket Regional High School as a freshman, Kuchar and his teammates could tell Freiermuth was different.

"Timmy is one of my best friends to this day, so I've known Pat since probably fifth or sixth grade, and when I was a senior he came in as a freshman and you could tell right away he knew how to play," said Kuchar, who was Freiermuth's first quarterback and an early football mentor. "It's been so cool, the best part with Pat is, these good athletes will go to D1 schools and change their ways, they may get big headed, but Pat always remembered where he came from."

This week Freiermuth is expected to become one of the few local athletes ever selected in the NFL Draft. The 6-foot-5, 251-pound Merrimac resident is widely considered the No. 2 tight end in the draft and is projected to go sometime late in the first round through early in the third round.

Wherever he winds up, Freiermuth's former coaches and teammates are delighted – but hardly surprised – that he's made it this far.

A competitor from the start

Growing up in Merrimac, Freiermuth was a busy kid. No matter the season, the future NFL prospect was constantly looking to compete.

"He always had a bat in his hand, a football, a basketball, he was always playing something," said Pat Foley, Freiermuth's older cousin and his head coach at the Brooks School. "He was just into competing at an early age and wanted to be active all the time, and that certainly has stuck with him."

Unlike many kids that age who only play sports for fun, Freiermuth was determined to win and was willing to do anything it took to do so. That competitiveness, combined with his natural athletic gifts, enabled him to immediately emerge as a two-way starter on varsity upon his arrival at Pentucket as a freshman in 2013.

"He handled it well, he worked really hard and I think everyone on the team really enjoyed playing with him," said Josh Wesolowski, a former teammate who is now back with Pentucket football as an assistant coach. "So he was able to adjust to being up on varsity at a young age pretty quickly."

"We knew he was talented and he just owned it. He always wanted to be the best and he fit right in," said Kuchar, who would later go on to play Division 3 baseball at Union College in New York. "He worked his butt off day in and day out in the weight room and really came in with that humble competitiveness.

"You always wanted Pat on your side because he always carried that chip on his shoulder," Kuchar continued. "He always wanted to compete at the highest level, and when he walked in as a freshman we knew he'd be able to do great things for us."

After helping Pentucket to an 8-2 season as a freshman, Freiermuth came back bigger and stronger as a sophomore, and his teammates immediately took note. Wesolowski, by this point a senior, said he and the others were extremely impressed by his growth and that he now seemed like an upperclassman despite his youth.

That progression never stopped, and after transferring to the Brooks School to play for Foley in 2015, he began to establish himself as not only one of the best players in Massachusetts, but as one of the best in the entire country.

Freiermuth's coming out party on the national stage came on Sept. 29, 2018. Now Penn State's starting tight end as a true freshman, Freiermuth and the No. 9 ranked Nittany Lions took the field against No. 4 Ohio State for the school's annual White Out game.

In front of a crowd of more than 110,000 people, plus millions more watching the primetime matchup on ABC, Freiermuth made a highlight reel, one-handed touchdown catch to give Penn State the lead.

Ohio State would wind up winning the game 27-26 in a heartbreaker, but Freiermuth had set the tone. By the time he was finished he had racked up 92 catches for 1,185 yards and 16 touchdown catches, a program record for a tight end.

"It's been a lot of fun to follow him and have a real rooting interest in a big time college football program," Foley said. "When we got a chance to see him play in person those were some awesome experiences, to see him play in front of 107,000 people and playing at a high level was awesome. Even on a regular basis, being able to turn on ABC or ESPN, whatever their game was on, as much as possible we've build Penn State into our schedule to watch him play."

The leadership qualities that set Freiermuth apart at Pentucket and Brooks were evident at Penn State too. He became one of a small handful of Nittany Lion players ever named captain as a sophomore, and throughout the pandemic he remained a vocal proponent of playing the season even though he could have easily opted out to prepare for the NFL Draft. He even continued to play after suffering a serious shoulder injury in Week 2 last fall against Ohio State, ultimately playing two more games before undergoing season-ending surgery and eventually declaring for the draft.

Now, as Freiermuth waits to hear his named called, those who were there from the beginning say they're grateful to have gotten to see his whole journey play out, and they're confident the best is yet to come.

"It's just cool to see him transition from that sixth grader I knew him as, playing with him and not only the athlete and competitor he is, but the well respected man he became," said Kuchar said. "It's very humbling and the sky's the limit for him. It's pretty surreal."

"It's so exciting to see someone from our area have so much success and it makes me glad it's him because I know he's such a nice guy and a hard worker," Wesolowski said. "If he was someone, you know, who was unlikable or stuck up it would make watching the journey less exciting, but he's such a nice kid who comes from such a great family, he's someone you want to root for."

Barring any unexpected developments, Pat Freiermuth is expected to become one of a small handful of local athletes to earn an opportunity with a major professional club when the upcoming NFL season begins this fall. Here are a handful of other notable locals who have played professionally at the highest level in their sport.

Note: There have been many others who have been drafted by professional teams and played in the minor leagues or overseas. To help build out a more comprehensive list, or to add any omissions to the above list, please contact Mac Cerullo at mcerullo@newburyportnews.com.