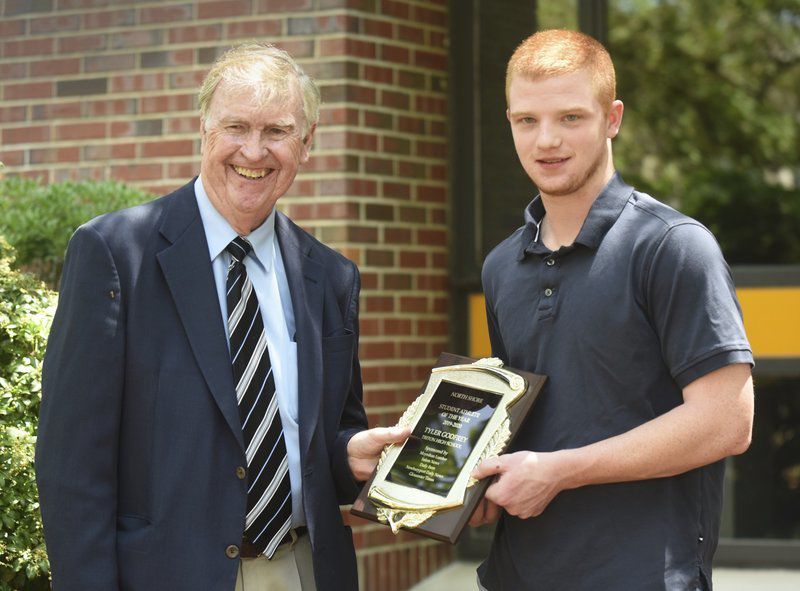 BRYAN EATON/Staff photoJack Moynihan presents Triton graduate Tyler Godfrey the Moynihan Lumber Student-Athlete of the Year Award. Godfrey, who is committed to play baseball at MIT, is his class salutatorian and was a two-year captain in hockey and baseball for the Vikings. 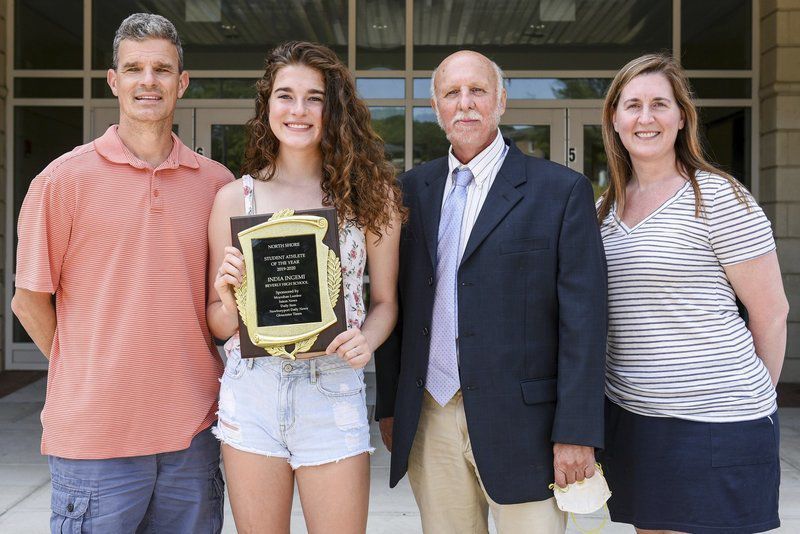 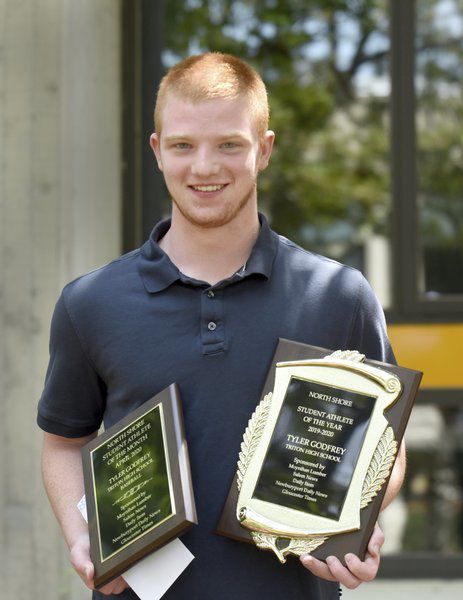 BRYAN EATON/Staff photoTriton hockey and baseball star Tyler Godfrey has been selected as Moynihan Lumber Student-Athlete of the Year. 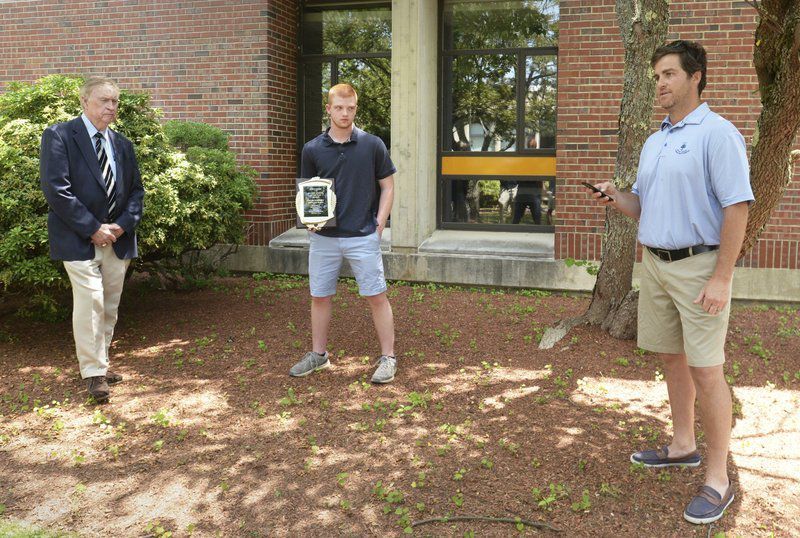 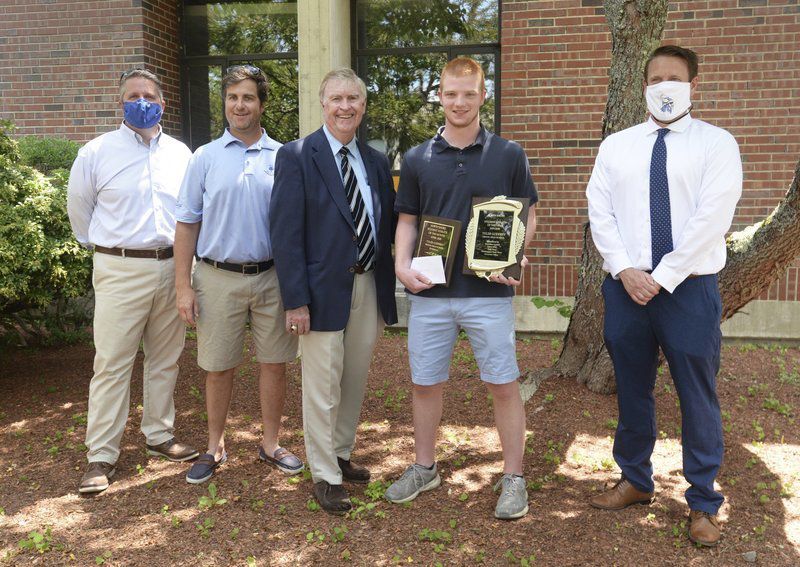 BRYAN EATON/Staff photoJack Moynihan presents Triton graduate Tyler Godfrey the Moynihan Lumber Student-Athlete of the Year Award. Godfrey, who is committed to play baseball at MIT, is his class salutatorian and was a two-year captain in hockey and baseball for the Vikings.

BRYAN EATON/Staff photoTriton hockey and baseball star Tyler Godfrey has been selected as Moynihan Lumber Student-Athlete of the Year.

BYFIELD — Triton’s Tyler Godfrey is everything you could ask for in a student-athlete. He’s an outstanding hockey and baseball player who has served as a two-year captain in both sports while also ranking among the best in the region academically.

Now, he’s the first athlete in Triton history to earn Moynihan-Lumber Student-Athlete of the Year honors.

Godfrey, who is committed to play baseball at MIT next year, was selected as the male recipient of the award, which annually honors student-athletes on the North Shore who have demonstrated excellence in their chosen athletic field and in the classroom. Beverly’s India Ingemi, an All-State track champion who will be taking her talents to Princeton next year, was honored as the Moynihan Lumber Female Student-Athlete of the Year.

“It feels great to be recognized out of all the North Shore athletes to win this award,” Godfrey said. “Both of my parents have pushed me to be the best I can in the classroom as well as on the athletic field. I value the education part, I’ve challenged myself, and Triton has had some really good teachers who have helped me, especially my calculus teacher, Ms. Kathy Norton, and my chemistry and physics teacher, Mr. Ian McBee.”

Traditionally the winners receive their scholarship at a special banquet, but due to the Covid-19 pandemic, Godfrey and Ingemi received their awards during a pair of ceremonies at their respective schools on Tuesday.

For the past two years, Godfrey has ranked among the most impressive athletes in the Greater Newburyport region and beyond. This past winter, Godfrey led Triton hockey to its best season since 1990, captaining the Vikings to the Division 2 North Finals as a defenseman before earning All-CAL and Daily News MVP honors.

Godfrey has also served as Triton baseball’s starting catcher for the past few years, and while he was unable to finish his career due to the coronavirus pandemic, he will continue his career in college playing for MIT.

Academically, Godfrey finished as salutatorian of Triton’s Class of 2020, posting a 4.74 GPA after also scoring 1,510 on his SATs. This past semester he took five AP classes while serving in a variety of leadership roles, including with the Athletic Leaders Club, Robotics Club, Cribbage Club and Community Service Club. He was in the National Honor Society and Foreign Language Honor Society, took part in Massachusetts Student Government Day twice, served as a class officer his junior and senior years and regularly volunteered with Triton’s youth hockey and baseball programs.

Last April he also received a major statewide honor when he was selected as a recipient of the Boston Bruins-MIAA Sportsmanship Award for 2019. Earlier this spring he also received another major honor, earning selection to the Daily News of Newburyport’s All-Decade team for boys hockey.

“He’s one of the best competitors that I’ve coached and he’s just a fantastic kid and a gentleman,” said Triton hockey coach Ryan Sheehan. “He’s well deserving of the award.”

As for Ingemi, Beverly girls track and field coach Dave Jellerson says she'll go down as the greatest student-athlete in program history.

"Often times I am asked 'who was the best track and field athlete you ever coached?'. I now can answer that question; it is India," said Jellerson, who has led the Beverly High track teams since 1974.

According to the longtime Panther coach, Ingemi leaves The Garden City with 11 school or class records for indoor track alone. She was the Massachusetts indoor 300 meter state champion and won both the 55 dash and 300 events at the Division 2 meet. Ingemi was voted the Outstanding Athlete at the Coaches Invitational and was a three-time NEC Indoor Performer of the Year as well as a three-time Salem News Runner of the Year.

During the outdoor season, Ingemi snared 12 school or class records, was a three-time NEC Runner of the Year and two-time Salem News Runner of the Year. She consistently brought energy, determination and leadership to both practices and meets and always strove to do her very best.

She's also a tremendous student, carrying a 4.74 GPA and earning all A+ grades throughout her only two senior semesters, and she'll attend Princeton University beginning in the fall.

"Definitely at the top," Ingemi said confidently when asked where the award ranked among her many other accolades over the past four years. She was honored with a plaque and $1,000 scholarship check from Jack Moynihan of Moynihan Lumber on Tuesday afternoon at the front entrance of Beverly High.

"I didn't expect this at all. I was just really surprised and extremely honored to even be considered in the first place, so this is definitely at the top."

Godfrey becomes the fourth Greater Newburyport athlete in history to earn Moynihan Lumber Student-Athlete of the Year honors, joining Newburyport’s Sam Acquaviva — who received the honor last year — as well as Amesbury’s Ashley Waters in 2005 and Amesbury’s Devon Warwick in 2002.

Ingemi, meanwhile, is the ninth all-time winner from Beverly High. The most recent prior was Hugh Calice in 2017.