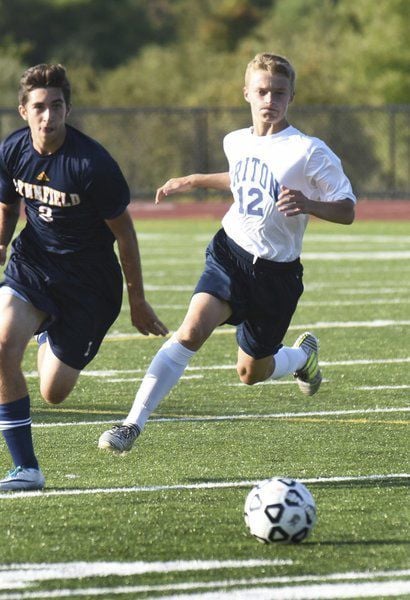 BRYAN EATON/Staff photo. A Triton and Lynnfield player chase after the ball. 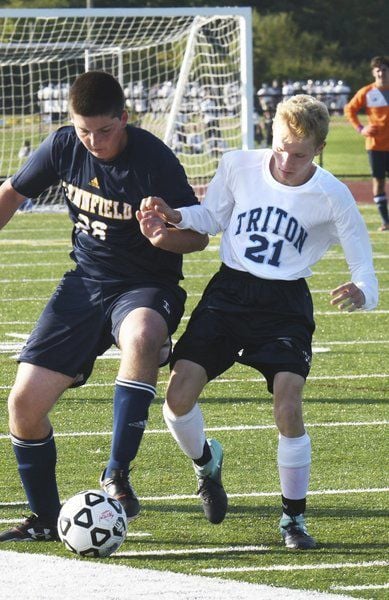 BRYAN EATON/Staff photoA Triton and a Lynnfield player clash in action on Tuesday. The Pioneers beat the Vikings 1-0.

BRYAN EATON/Staff photo. A Triton and Lynnfield player chase after the ball.

BRYAN EATON/Staff photoA Triton and a Lynnfield player clash in action on Tuesday. The Pioneers beat the Vikings 1-0.

BYFIELD — A second-half penalty shot was all Lynnfield needed on Tuesday afternoon as the Pioneers prevailed on the road against Triton, 1-0.

Pioneer junior Jonathan Luders’ goal with 22:50 left in the second half was the only offense all day as both teams struggled to get clean looks on net.

“The best play was at the end of the game after it was 1-0, so the kids showed character,” said Viking coach Brad Smith. “They were tired, so that’s what we can build on. They still struggled to defend and take shape, but our best play was when they were down and tired, so that shows some character about the kids.”

Early chances for the visitors were stymied the entire first half, but the Vikings weren’t able to push the play to their offensive side of the field.

“I thought we played pretty well,” said Pioneers coach Brent Munroe. “They defended pretty well. They didn’t make it easy for us. Nothing comes easy as far as scoring on them, so it was hard. We got one pretty late, and that was it.”

Strong efforts from the Vikings (0-2) defense prevented the Pioneers from going up early despite taking 11 shots in the first half.

The visitors also had plenty of chances on corner kicks but weren’t able to get past the defensive wall in front of the crease. The Pioneers weren’t able to break through to get clean shots in front, and that can be credited to the Vikings defenders clearing them out.

On the other side, the Viking offense couldn’t get any separation beyond the middle of the field with the Pioneers defense playing an effective pressure along the midfield line.

In net, Triton goalie Henrik Ernst made six saves. His opponent, Jack Campbell, only saw two attempts and stopped one.

“He played well,” said Smith on Ernst. “He handled the ball a lot, but they weren’t quality shots, so that’s a testament to the defense.”

The Vikings got more undisciplined later on in the game with a few fouls that led to the game-winning penalty shot goal. The game continued to get chippier near the end, but surprisingly there weren’t any cards awarded.

“(The goal) was a relief for us,” said Munroe. “You start thinking, is it ever going to come, so when it goes in that makes you feel better.”

The goal allowed the Pioneers to sit back a bit more,  and led to chances for the Vikings to attempt offensive possession.

With 11:35 left, the blue-and-white got their best chance in front when Ernst centered a pass on a free kick from the sideline, but the Pioneer goalie was able to scoop the ball up and send his team down field in transition.

Smith attributed part of the lack of offense to struggling in the team’s own end.

“It’s a reflection that we weren’t smart enough defending,” said Smith. “Once we take our shape and defend as a team, that will help us keep the ball.”

The Vikings will have a chance to rebound on Thursday against Georgetown, still seeking their first victory, and goal, of the season.