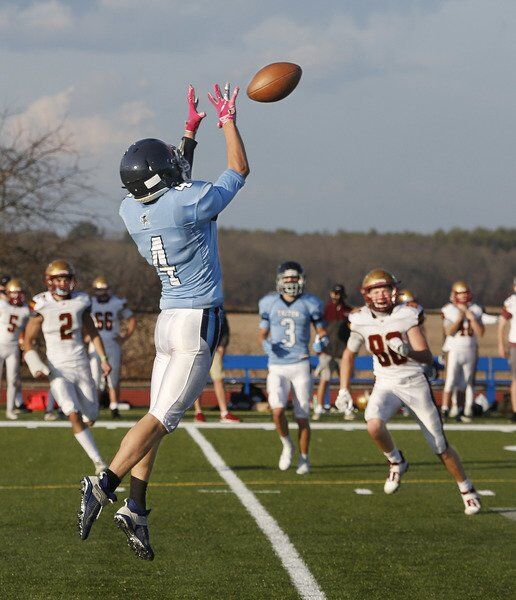 MIKE SPRINGER/Staff photoTriton's Ty Scholtz goes up for a catch against Newburyport during Friday's game. 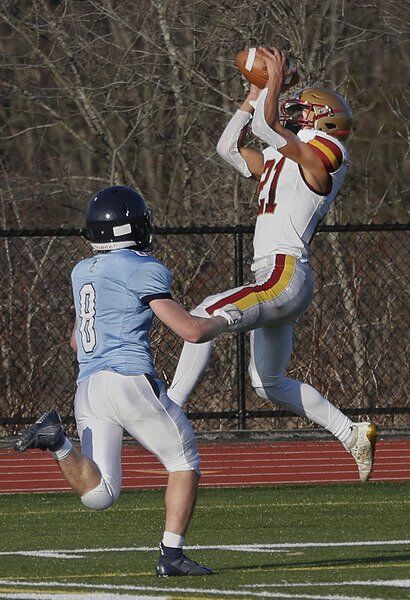 MIKE SPRINGER/Staff photoNewburyport's Trevor Ward catches a touchdown pass during Friday's 28-14 win over Triton. Ward had two touchdown grabs on the day to help the Clippers improve to 2-1. 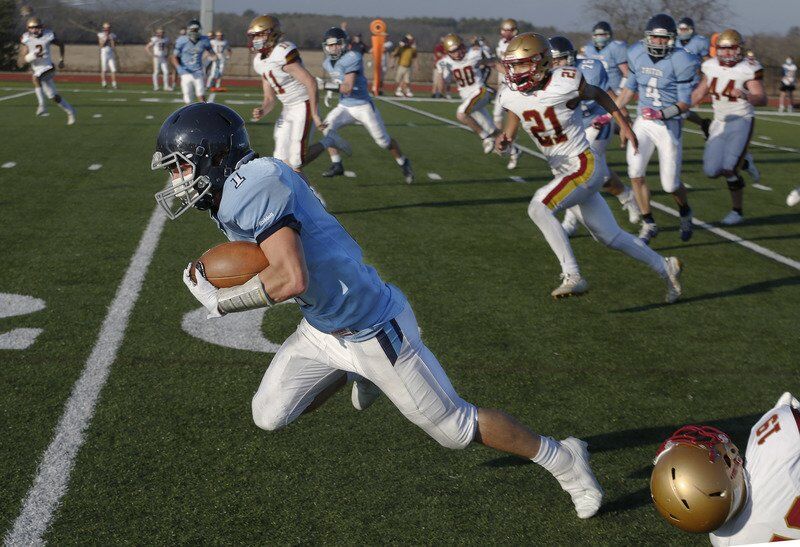 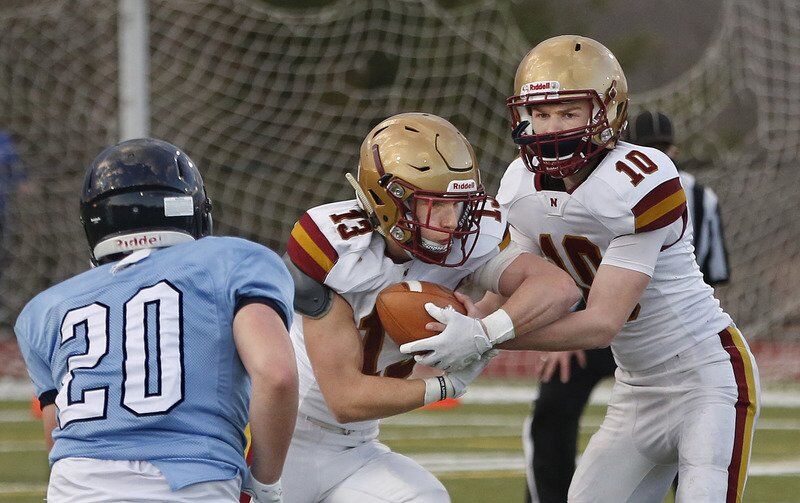 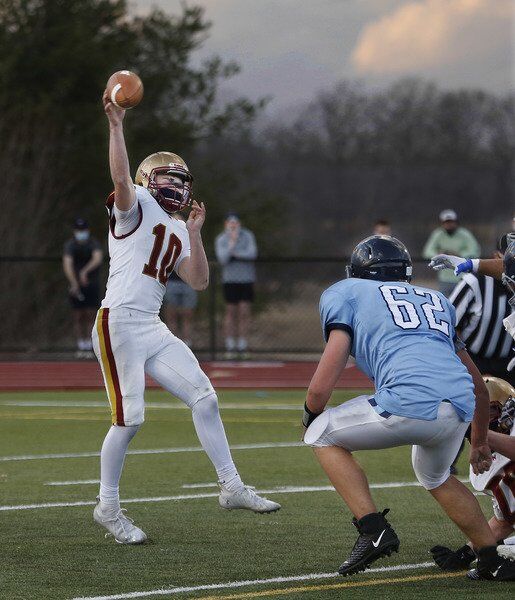 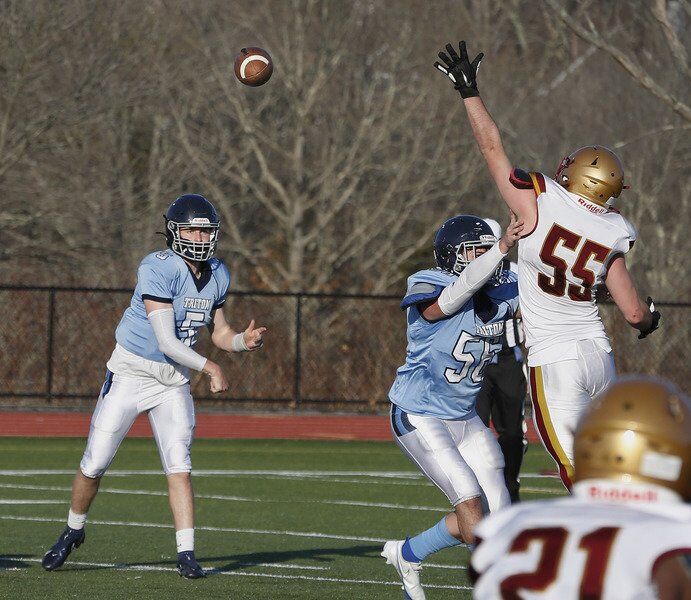 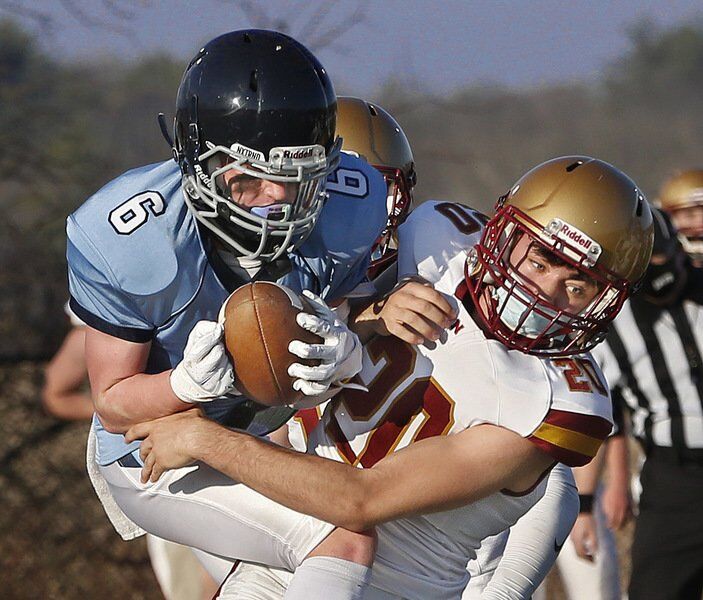 MIKE SPRINGER/Staff photoTriton's Ty Scholtz goes up for a catch against Newburyport during Friday's game.

MIKE SPRINGER/Staff photoNewburyport's Trevor Ward catches a touchdown pass during Friday's 28-14 win over Triton. Ward had two touchdown grabs on the day to help the Clippers improve to 2-1.

BYFIELD – Shackled one week ago in a loss at Lynnfield, Newburyport’s big-play bag was bursting at the seams.

Back-to-back Clipper possessions in the second quarter alleviated that pent-up pressure and, in the process, powered Newburyport past rival Triton, 28-14, to claim the Border Battle Trophy for the third straight season.

“It’s huge. This is always one of our biggest battles of the year,” said Newburyport senior Charlie Cahalane. “Triton always gives us their best, and we showed up. We showed up ready to play from start to finish.

“We never gave (the trophy) back to them our entire career, three years on varsity and our class has won it all three.”

Big-play man Trevor Ward provided the fireworks, pulling in a pair of touchdown strikes from Finn Sullivan – one for 34 and the other for 36 yards, breaking open what had been a 7-7 slugfest.

Ward, who took a screen 68 yards to paydirt only to see that one washed away by penalty flag, was pretty much unstoppable all evening, hauling five Sullivan offerings for a game-high 113 yards. He also ran the football four times for a team-best 49 yards.

That two-touchdown lead kept the scrappy Vikings at arm’s length the rest of the way, thanks to a suffocating Newburyport defensive effort.

As the game went on the Clipper “D” played tighter and tighter.

“Wanting it more, every ball is yours, anytime they catch it it’s your tackle,” explained Cahalane of the Port’s defensive mindset.

Newburyport got the kill shot early in the fourth when Jacob Buontempo (10 carries, 40 yards) capped a six-play, 73-yard TD march. His 7-yard slam into the heart of the line pushed things to 28-7.

While Triton was game, the Clippers weren’t about to play the mark to any Cinderella finishes.

Triton would put up a fourth-quarter score, a 1-yarder from from Kyle Odoy with just under four minutes to play, making it 28-14. The Vikes even recovered the ensuing onside kick.

But that’s where the fun would end, with John Donovan punctuating things with a monster strip-sack in the waning seconds.

“It was a team effort. It starts with Nic Colella and Lucas Stallard, our field generals in the middle,” said Smolski. “John Donovan, Andrew Cullen, Zach Wilson Robbie Merenda and Sam Cooper on the defensive line, that’s a strong unit. Charlie Cahalane at safety really stepped up, making some big plays in coverage.

“You have to try and contain (Odoy), put some pressure on, make him run around, and hopefully keep him from breaking a big one.”

All the news was not positive for the Clippers, though. Senior captain Jason Tamayoshi left the game with an injury in the first half after only his second carry of the game and did not return.

The teams had traded first-quarter touchdown runs by the quarterback. Sullivan skipped in from the 9 for Newburyport while Odoy weaved his way through the Clippers for a 13-yard score.

Odoy would be a busy trigger man in the Triton offense, completing 16 of 33 passes for 144 yards and spreading the ball to five different receivers. Sullivan was the mark of efficiency, hitting 10 of 12 for 136 yards.

“We talked at halftime, trying to come out with some energy, I thought that was a good opportunity for us,” said Triton’s McCarthy. “Getting the ball (to start the second half) down two scores. If we punch one in we’re right back in the game. It just didn’t happen.

The Clippers, 2-1, head to next week’s battle with Ipswich with a simple rallying cry, according to Smolski.

“Four weeks of football in the rest of their life,” he said.

If they play with that attitude, the Clippers will be just fine.