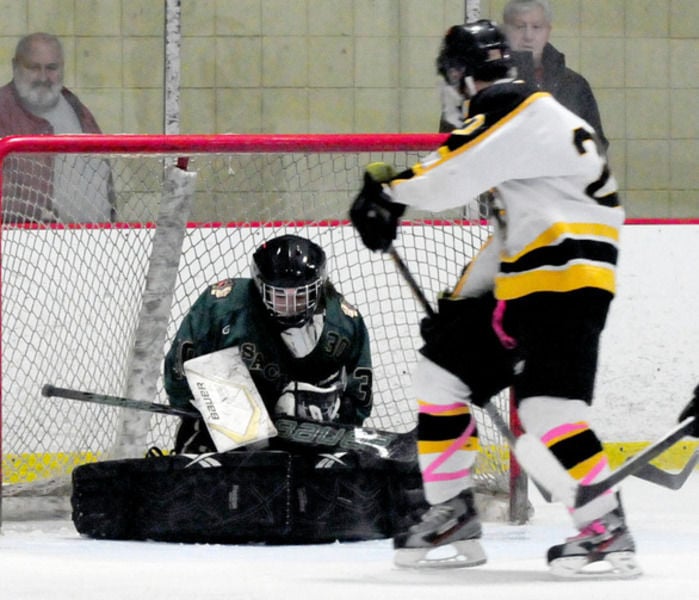 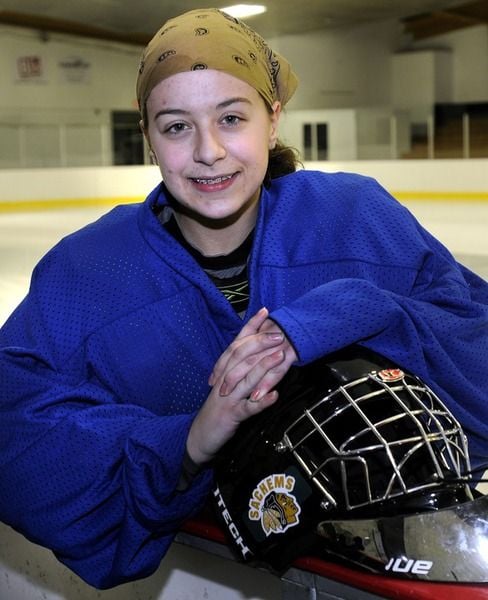 Merrimac resident Sam Bomba was a standout goalie for three seasons at Pentucket.

Merrimac resident Sam Bomba was a standout goalie for three seasons at Pentucket.

Merrimac’s Sam Bomba may have cost herself a chance to play women’s college hockey because she played with the boys in high school.

The former three-year starter in goal for the Pentucket boys hockey team is spending a postgraduate year playing for the Boston Shamrocks U16/U19 team in the Junior Women’s Hockey League. The Shamrocks play their home games at Ristuccia Arena in Wilmington. Bomba splits time in net with Ipswich resident Kia Castonguay, a 15-year-old freshman in high school.

“Considering I had to switch to playing with girls, I surprisingly like it a lot,” Bomba said. “I wasn’t expecting it to be a good experience, but it is.”

As a high-schooler at Pentucket, Bomba became well known around North Shore boys hockey circles for keeping an otherwise overmatched Pentucket team in games for the last three years.

She began playing with the boys at age 6, following in the footsteps of her brother, Billy, Pentucket’s only 100-point scorer in program history.

Bomba never considered seeking out a coop girls team at the high school level, believing she could earn the starting goaltender job for the boys team at Pentucket.

She did just that, starting just about every game over her final three years of high school. Before games, she would change into her equipment in the bathroom in rink lobbies, before joining the boys for a pregame meeting once everyone was dressed.

“I definitely think I would have had more of an opportunity to play in college if I switched over to a girls league,” Bomba said. “Obviously, college coaches of women’s hockey teams aren’t coming to boys games to scout players. But I definitely wouldn’t have done anything different. I loved playing with the boys. Even if I don’t play next year, I don’t regret anything I’ve done.”

Bomba’s father, Dennis, encouraged Sam to make the switch to girls hockey after her sophomore year.

“The one thing that killed her was playing with the boys,” Dennis Bomba said.

“College coaches don’t want to come see a girl play on a boys team. The game slows down with girls. After her sophomore year, she knew she would have to quit playing with the boys if she wanted to play in college, and she didn’t do it. She liked playing with the boys.”

Bomba didn’t receive an offer to play in college after having one of the best seasons of any goaltender in the Cape Ann League last winter. Her goalie coach, Rob Day, encouraged her to join the Shamrocks in hopes that Bomba would showcase her skills for college coaches looking for a postgraduate player.

Bomba is one of only two postgraduate players on the Shamrocks U16/U19 roster, while the rest of the players are still in high school. U16/19 coach Molly Corl has been impressed with Bomba’s attitude considering the 19-year-old is one of the oldest players on a struggling team.

“Right away, we could tell she would be good for us this season,” Corl said. “She’d been playing with boys her whole life, and it’s a bit of a transition, but it was to her advantage. She’s doing really well. She’s kept us in a lot of games.”

She is taking this semester off while working at Latitude’s Gym with the hope of returning to school next fall.

“My thinking coming into the season was that I’d find a college team to play for,” Bomba said.

“At this point, I’m not entirely sure it’s heading in that direction. I wouldn’t have changed anything about this year. I do want to go back to school, so there’s a chance this could be my last year of hockey. I always say I might as well play while I’m young because it doesn’t last forever.”