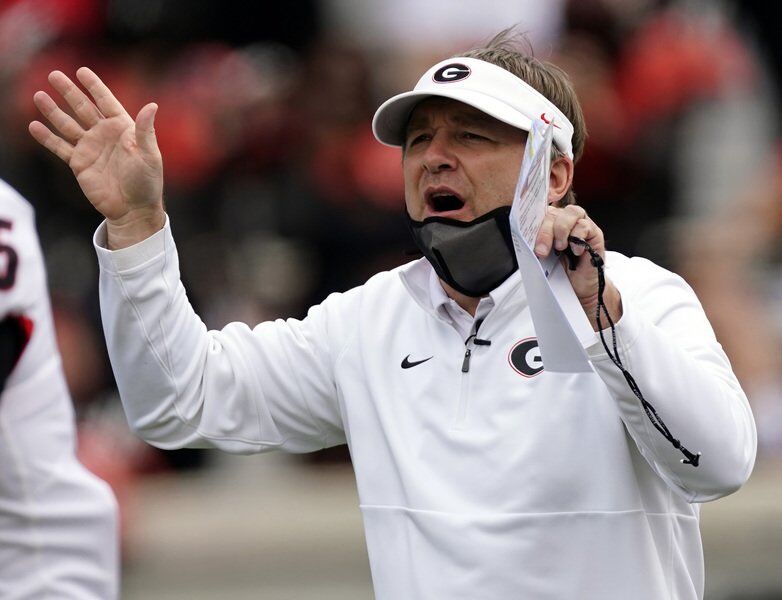 AP Photo/John Bazemore, FileGeorgia and head coach Kirby Smart are a popular pick to win this year's national championship. The Bulldogs have a stern test to open the season, though, when they face No. 3 Clemson on Saturday. 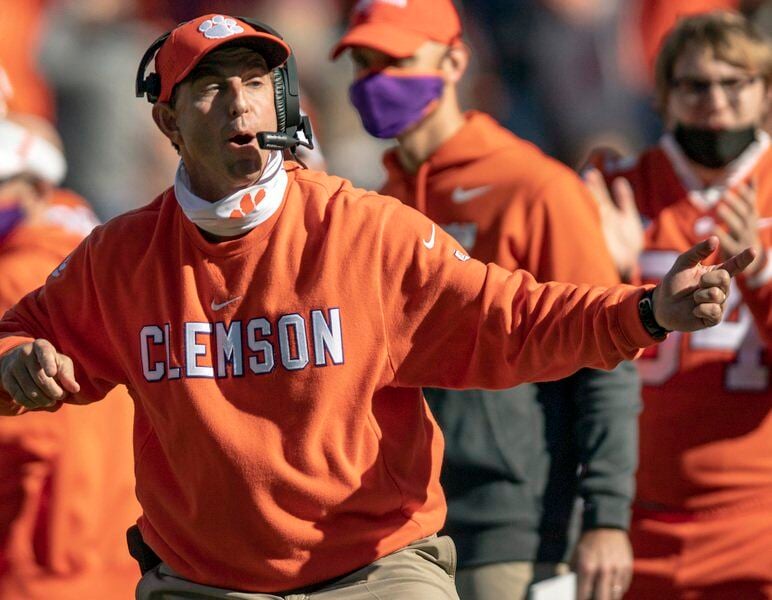 Josh Morgan/Pool Photo via AP, FileCoach Dabo Swinney and Clemson have what should be the game of the weekend when the No. 3-ranked Tigers take on No. 5 Georgia.

AP Photo/John Bazemore, FileGeorgia and head coach Kirby Smart are a popular pick to win this year's national championship. The Bulldogs have a stern test to open the season, though, when they face No. 3 Clemson on Saturday.

Josh Morgan/Pool Photo via AP, FileCoach Dabo Swinney and Clemson have what should be the game of the weekend when the No. 3-ranked Tigers take on No. 5 Georgia.

A year after the traditional Labor Day weekend bonanza of college football was whittled down to fewer than a dozen games by the pandemic, the 2021 season starts like none ever before.

For the first time since 2005, when the holiday weekend became college football’s official launch date, the season will open with five games pairing Top 25 teams — including a top-five match-up.

The jewel of Week 1 comes Saturday night in Charlotte, North Carolina, where No. 3 Clemson faces No. 5 Georgia.

Elsewhere, No. 1 Alabama opens its national title defense and season as it usually does: At a neutral site against a Power Five opponent. The Crimson Tide and new starting quarterback Bryce Young face No. 14 Miami and D’Eriq King in Atlanta.

The Big Ten decided to open its season with a bunch of conference games that produced two ranked matchups. No. 12 Wisconsin hosts No. 19 Penn State, two Big Ten powers trying to quickly wash away the memory of disappointing 2020 seasons. No. 17 Indiana, ranked in the preseason for the first time since 1969, goes to No. 18 Iowa.

Maybe the most intriguing of the ranked vs ranked games is one that Texas probably didn’t expect would require such heavy lifting when it was scheduled. The 21st-ranked Longhorns host No. 23 Louisiana-Lafayette in the debut of head coach Steve Sarkisian.

The Ragin’ Cajuns of the Sun Belt knocked off a ranked Big 12 team, Iowa State, on the road last season.

Beyond the ranked matchups, there is No. 4 Ohio State at Minnesota on Thursday night; No. 10 North Carolina visiting Virginia Tech on Friday night; No. 16 LSU playing UCLA in the Rose Bowl on Saturday night; and No. 9 Notre Dame goes to Florida State Sunday night.

Last year, there were just nine games played over Labor Day weekend in mostly empty stadiums. The Power Five conferences had all delayed their seasons, and four conferences had no plans to play in the fall at all.

The pandemic hasn’t gone away, but vaccination rates among college football players are well ahead of the general adult population. Optimism abounds. College football is back to — mostly — normal.

The picks, with odds from FanDuel Sportsbook:

Sooners were scheduled to play in New Orleans, but Hurricane Ida forced a change ... OKLAHOMA 49-14.

Don’t call it a playoff elimination game, but it could serve as tiebreaker of sorts come December ... GEORGIA 28-24.

Bulldogs warmed up by shutting out UConn last week; This will be tougher ... OREGON 38-16.

Nittany Lions have won four straight and six of seven meetings, dating back to 2007 ... WISCONSIN 24-21.

After a three-year wait, Emory Jones takes over at quarterback for the Gators ... FLORIDA 35-14.

Hawkeyes have won three straight and seven of eight in the series, but these aren’t your father’s Hoosiers. Or are they? ... IOWA 28-23.