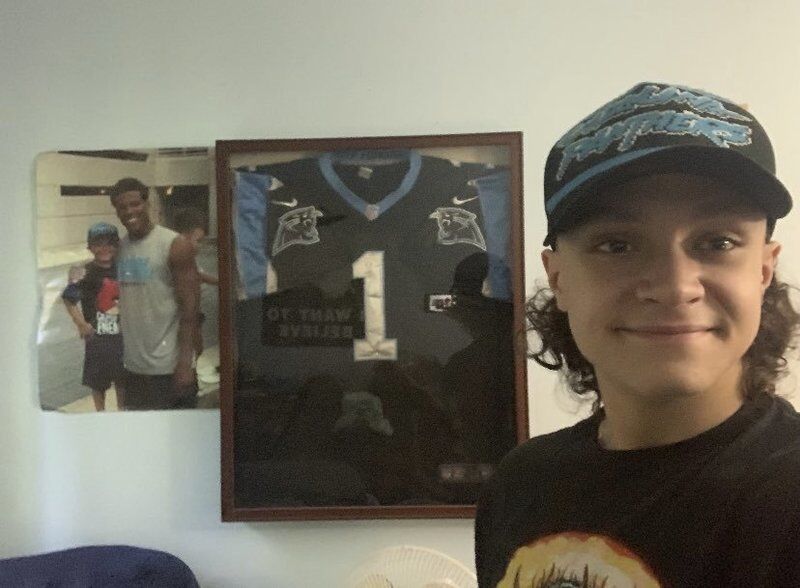 James DiGiacomo, 16, is the boy who was in the famous commercial with Cam Newton almost a decade ago shows off the picture taken with he and Newton as well as the signed Panthers jersey of Newton that he had framed on his bedroom wall. The commercial resurfaced when Cam was released and replaced by Mac Jones. 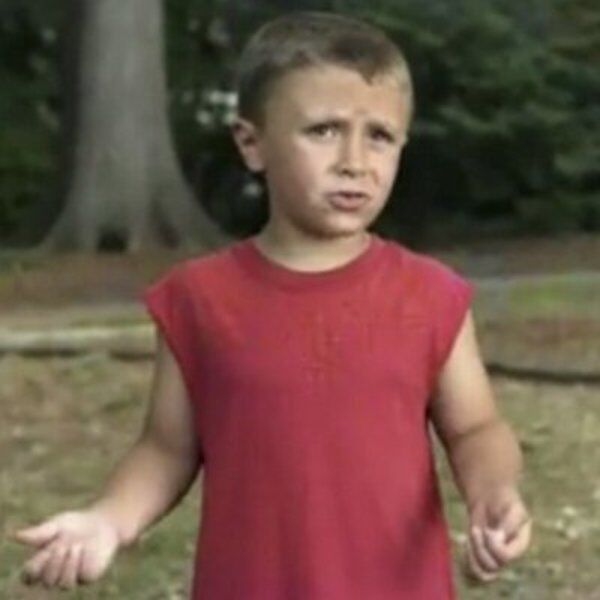 James DiGiacomo, shown here at 7 years old, was a star in this commercial with Cam Newton in 2012 promoting health and fitness for kids.

James DiGiacomo, 16, is the boy who was in the famous commercial with Cam Newton almost a decade ago shows off the picture taken with he and Newton as well as the signed Panthers jersey of Newton that he had framed on his bedroom wall. The commercial resurfaced when Cam was released and replaced by Mac Jones.

James DiGiacomo, shown here at 7 years old, was a star in this commercial with Cam Newton in 2012 promoting health and fitness for kids.

You most definitely don’t know the name James DiGiacomo.

But if you have any interest in the National Football League, even as a casual, cursory, Super Bowl party-only fan, you know who James is.

In fact, he probably made you laugh.

Well, DiGiacomo made us a laugh again this week.

When news broke that Cam Newton was released by the New England Patriots on Tuesday morning, thus elevating rookie Mac Jones to starting quarterback, almost instantly James DiGiacomo was back in our sights.

James was that 7-year-old boy with Cam Newton in the “NFL Play 60” commercial that was created in the summer of 2012 for the Super Bowl XLVII when the Ravens beat the 49ers.

“I woke up and had some posts in my Instagram (account) about the commercial,” said DiGiacomo, entering his junior year at Rockland High, a suburb about 30 miles north of Manhattan. “I didn’t know what had happened, but I figured something happened with Cam.”

The skit everyone remembers

The commercial starts out with James, as “Nate,” thanking Cam for coming to his school to promote health and fitness.

Then slowly and methodically – and humorously – “Nate” goes for Cam’s jugular.

Nate: “I promise to exercise and eat right.”

Nate: “And grow up big and strong, like you?”

Nate: “And be drafted Number One?”

Nate: “And make Panthers fans forget about you?”

Nate: (starts his right arm like a windmill) “I’m just loosening my arm.”

The commercial ends with the words, “Get active. Dream big.”

Nine years after the commercial was made, the now-16-year-old DiGiacomo still smiles when it is brought up.

“Nate” represents Mac Jones, finally growing up and, as promised, beating out the great Cam Newton.

“I honestly think it’s awesome that people still bring it up,” said DiGiacomo, who has been acting in commercials, bit roles in TV shows as well regular role as the son in “Kevin Can Wait,” starring Kevin James.

“I’ve done a lot of commercials over the years and did some TV work,” he said. “But that commercial with Cam is definitely a highlight. I didn’t realize how big it would be when we made it. But it was really cool. I’m very proud of it.”

This is not the first time DiGiacomo’s commercial rebooted due to Newton being placed as a starter. Back in 2019, when Newton was with the Panthers, Kyle Allen was officially named the starter and Newton’s season controversially ended when he was put on the injured reserve.

“It was very similar and the fact that it was in Carolina with the Panthers made it relevant,” said DiGiacomo. “I got calls from the Carolina media for a story. I pretty much figured that was it with me and Cam (in the limelight).”

DiGiacomo, who started acting at age 3, has fond memories of the auditioning and making of the commercial with Newton.

“My family got an email from my manager about this spot with Cam Newton,” recalled DiGiacomo. “Usually, for spots as important as this one, you usually get something sent to you to read and practice. I remembered doing the reading for it with a bunch of other kids.”

A week later the call came for another audition.

“There were only a few kids so I realized it was getting serious,” said DiGiacomo. “The thing is we were a big football family. My dad was a big Green Bay Packers fan, which means we all become Packers fans and love the NFL. This was a big deal.”

DiGiacomo got the gig, which meant his day with Newton.

“It’s funny the way they shot it,” recalled DiGiacomo. “Cam’s scenes were shot in front of the stadium. Mine were shot separately at the park nearby. Cam came to the park when my scenes were shot, doing the readings (off camera).”

DiGiacomo recalled Newton was nice, but they didn’t do a lot of interacting off camera.

“What does he care about some little kid?” said DiGiacomo. “We took a photo together and that was it.”

Not long after DiGiacomo’s and Newton’s representatives were called by ESPN bosses. They actually wanted DiGiacomo and Newton to appear together at “The ESPY’s,” ESPN’s annual yearly awards show.

“We couldn’t believe it. It was an amazing opportunity,” recalled DiGiacomo. “But Cam apparently didn’t want to do it. He ended up sending me a bag of some signed stuff, apologizing. It was cool.”

If DiGiacomo wanted to forget about that commercial, it’s pretty much impossible. Every time he steps in his bedroom there a framed picture of he and Newton from that day about nine years ago.

There is also a signed Newton Panthers’ jersey, which was part of the “swag” Newton sent him after deciding not to do The ESPY’s gig.

“I’ve done 35 commercials and some of them have been pretty memorable, especially the sitcom with Kevin James,” said DiGiacomo.

“But I will always have a special place for this commercial with Cam. Always,” said DiGiacomo. “I saw where some Patriots fans thought that that might have been Mac Jones in that commercial. But it wasn’t. It really was me.”

But after five straight years playing locally, his acting schedule, which included bi-monthly trips to Los Angeles, got in the way of practices and games.

“I love baseball,” said DiGiacomo, now 16. “But it came down to choosing between baseball and acting. I saw acting in my future so it wasn’t too hard of a choice, but I didn’t want to give up baseball.”

DiGiacomo, who was co-star in the NFL Play 60 commercial with Cam Newton in 2012, said winning an audition for an Amazon Fire Plus tablet, beating out 500 boys, made him realize he had the talent to perform.

“Hopefully, we get through the pandemic and more auditions open up,” he said. “I really love acting, especially comedy. It’s in my blood.”