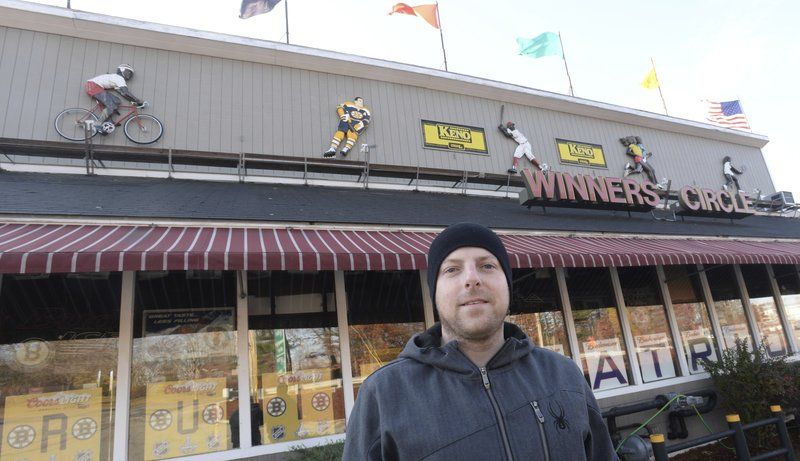 BRYAN EATON/Staff Photo Artist Reed Duford is replacing the wooden sports related sculptures above at the sports bar The Winner's Circle. Bruins legend Johnny Bucyk is the first new sculpture on the building, and will soon be joined by four others. 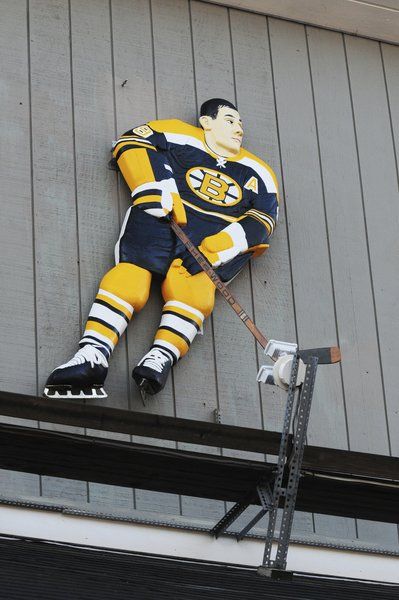 BRYAN EATON/Staff Photo Artist Reed Duford is replacing the wooden sports related sculptures above at the sports bar The Winner's Circle. Bruins legend Johnny Bucyk is the first new sculpture on the building, and will soon be joined by four others.

SALISBURY – Since the Winner’s Circle opened its doors more than 40 years ago, the restaurant’s patrons have been greeted by a series of wooden sculptures adorning the outside of the building.

The sculptures depict various athletes, including a tennis player, a biker and a runner, but like anything made of wood left out in the rain for too long, the sculptures are starting to rot.

So to give the restaurant a bit of a makeover, restaurant co-owner Jerry Duford contracted his son Reed Duford to commission a series of lifelike athlete sculptures to replace the old ones, and the first one – depicting Bruins legend Johnny Bucyk – is finished and was recently mounted to the side of the building.

The new sculptures will include Ted Williams, Larry Bird, Tom Brady and a pair of runners honoring the Winner’s Circle Running Club, in addition to Bucyk. The sculptures are made of sign foam – a waterproof, weatherproof material – and Duford has been working on them for roughly a year and a half now.

In the beginning, all of the sculptures started off as four-inch thick blocks of material, which Duford would then outline and eventually cut out limbs and glue them back together in the shape of the athlete.

Once the athlete’s general shape is in place, he would outline some more and sculpt some more until the final product began to take shape. Since the sculptures are being mounted to the building, the athlete is only being carved into the front of the material.

“It’s not going to be a full body sculpture,” Duford said. “Like in Star Wars when Han Solo is frozen, you can only see half.”

The sculptures themselves are a sort of cross between realism and a more cartoonish look. Duford, who studied illustration at the Ringling College of Art and Design and has a Masters at the New York Academy of Art in Manhattan, said his work usually leans more towards realism, so it’s a slight departure in that respect.

Duford said Larry Bird will be the next sculpture completed, and he expects it should be up by mid to late December. He hopes the rest will be completed soon after, adding that getting Bucyk done has helped speed his progress on the others considerably.

“It’s going faster now, because Bucyk was the most challenging and had the most detailed,” Duford said. “I’m already halfway into the rest so it should go faster.”