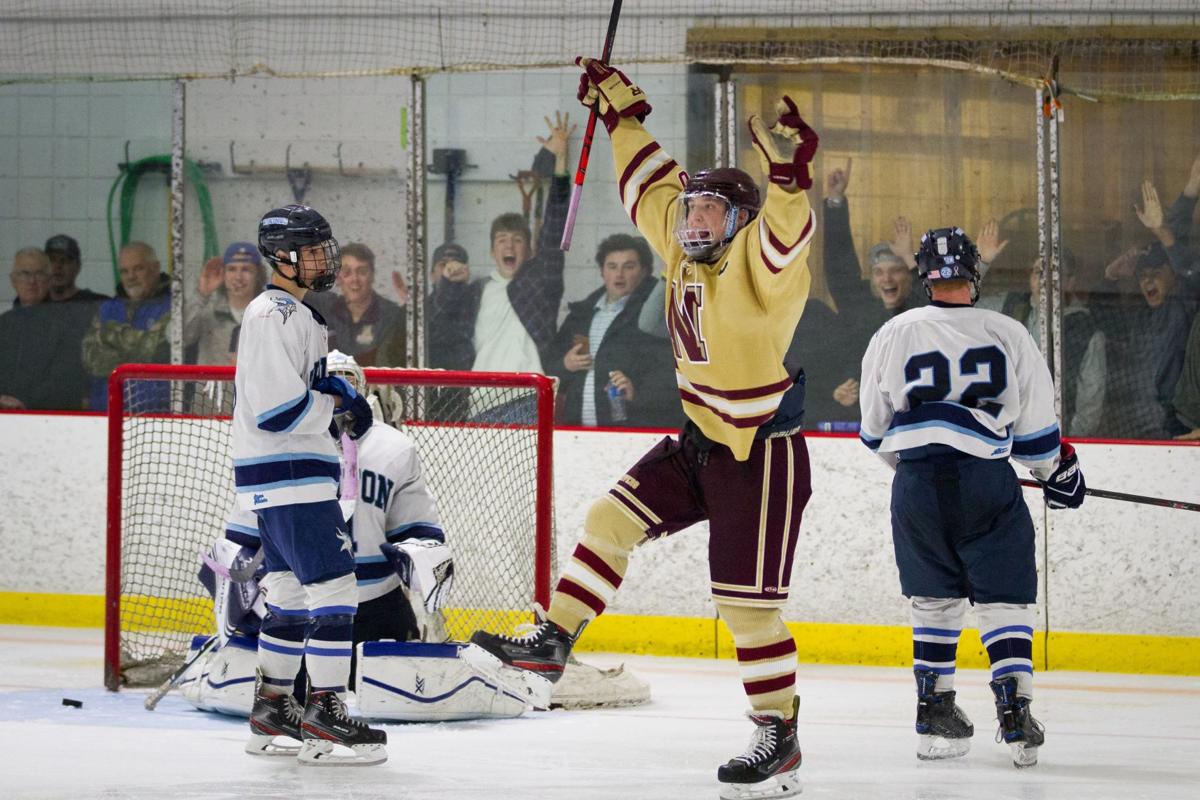 Newburyport's Ben Reynolds celebrates after scoring the tying goal early in the third period against Triton. Newburyport would go on to score three more times for the dramatic 5-2 home win. 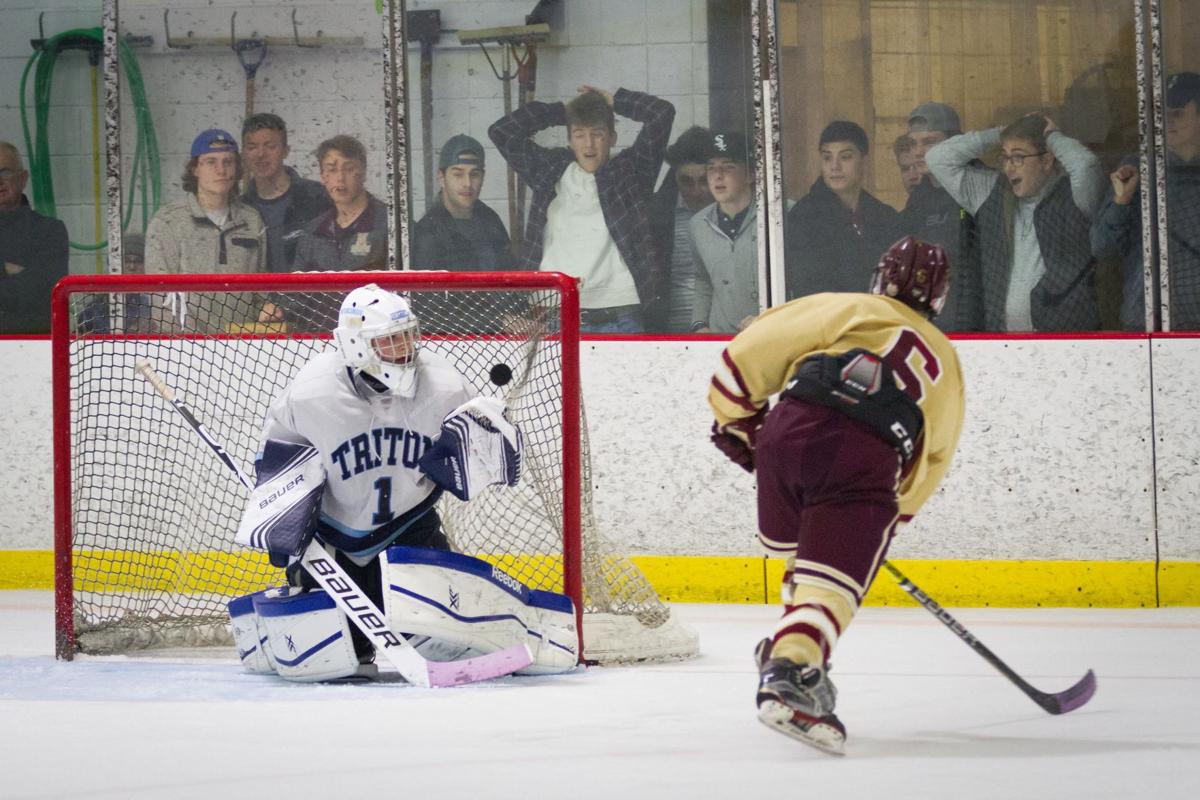 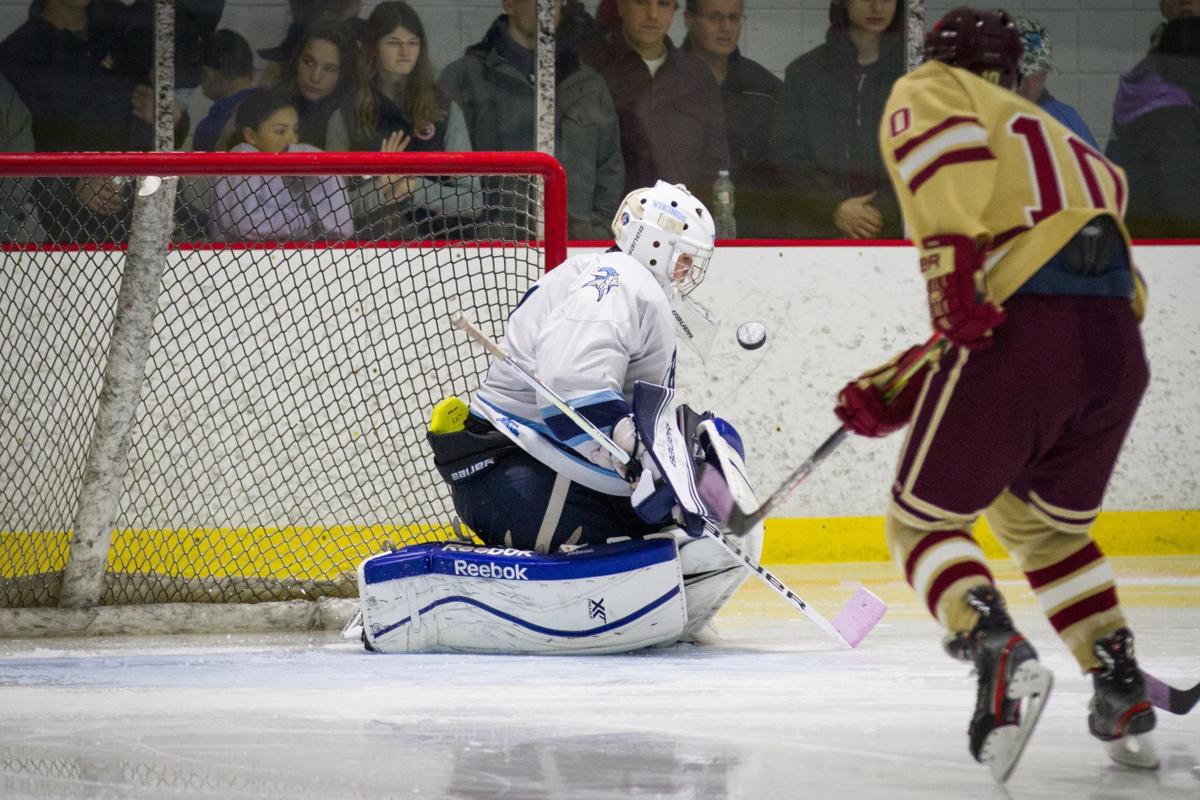 Triton goalie Wes Rollins keeps a bouncing puck in front of him during Saturday's game against Newburyport. 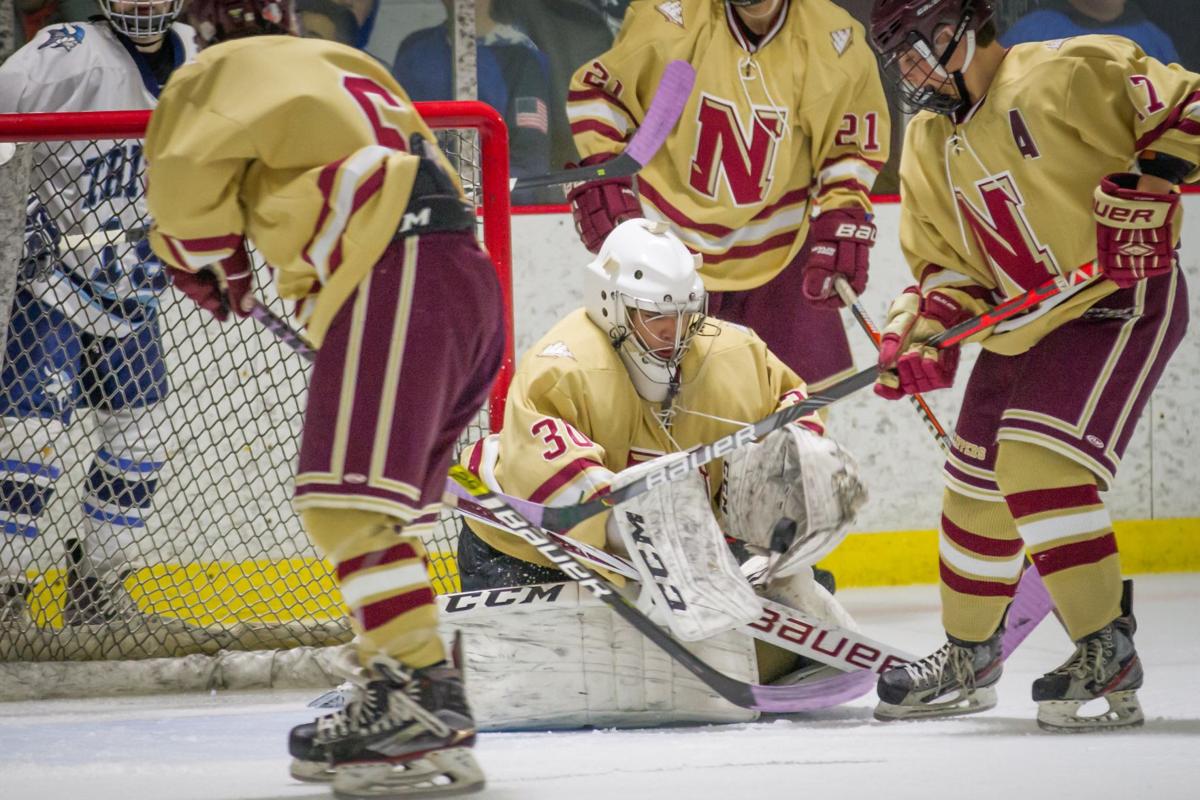 Newburyport goalie Jamie Brooks makes a save during Saturday night's 5-2 win over Triton at the Graf Rink. 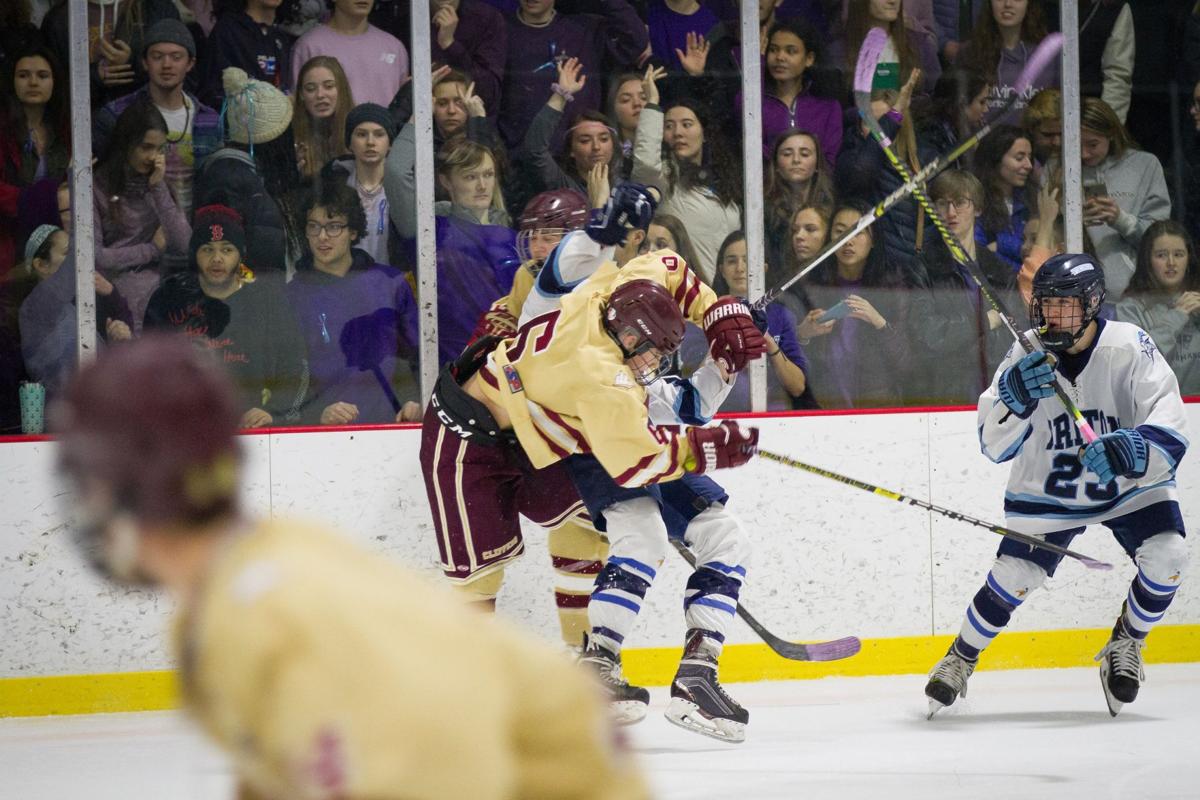 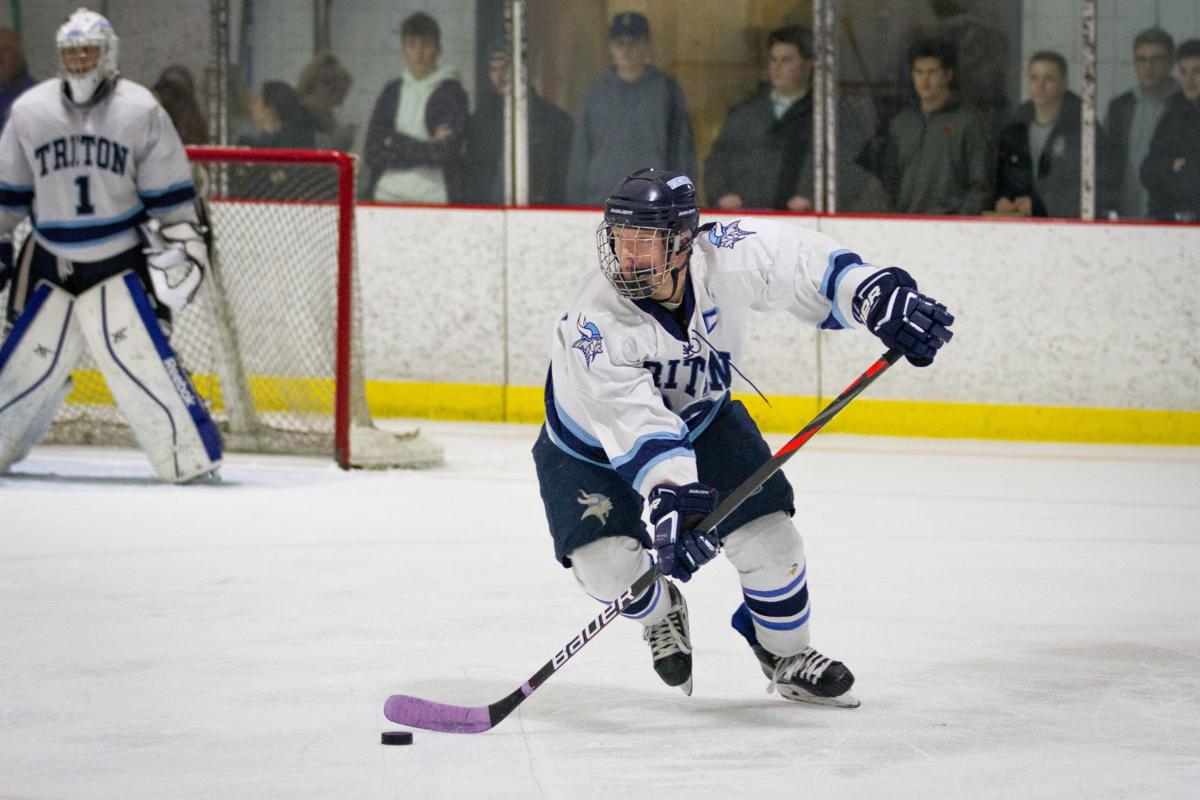 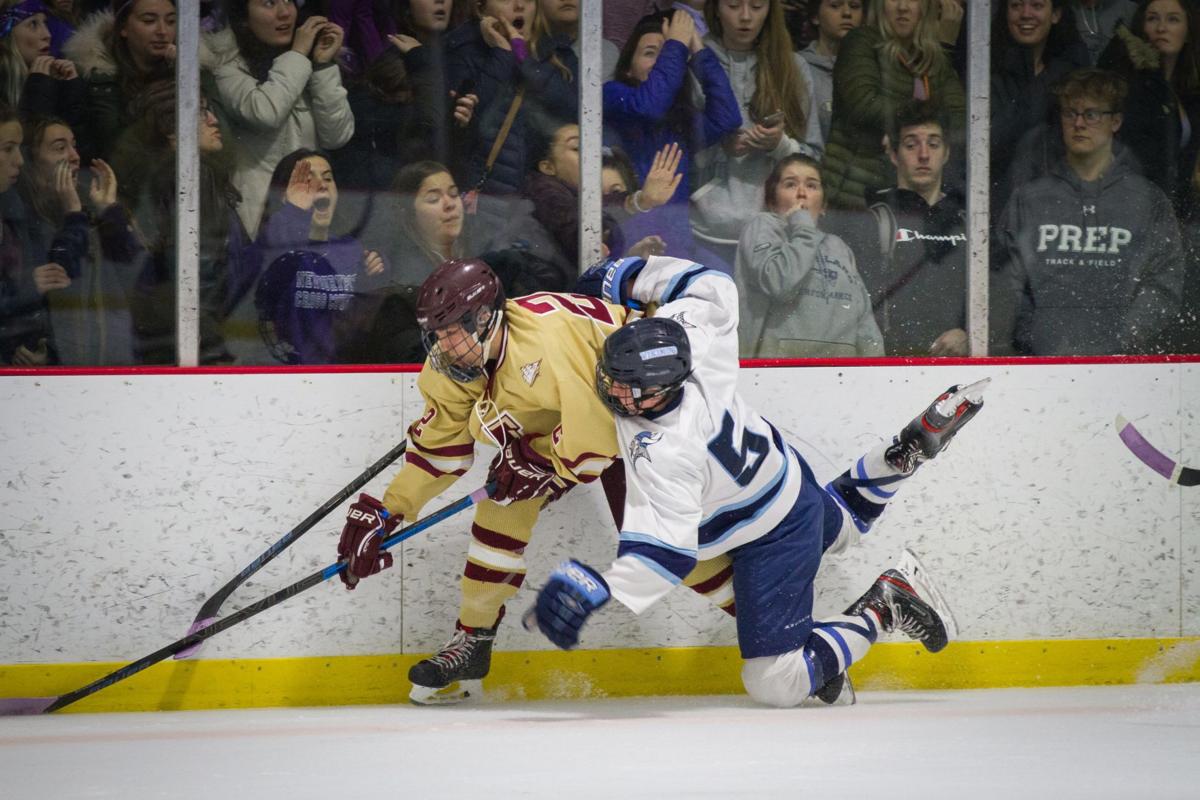 Newburyport's Ben Reynolds celebrates after scoring the tying goal early in the third period against Triton. Newburyport would go on to score three more times for the dramatic 5-2 home win.

Triton goalie Wes Rollins keeps a bouncing puck in front of him during Saturday's game against Newburyport.

Newburyport goalie Jamie Brooks makes a save during Saturday night's 5-2 win over Triton at the Graf Rink.

NEWBURYPORT — After the conclusion of Saturday night’s game at Graf Rink, Newburyport’s Ryan Archer could be seen outside the locker rooms shouting, “This is our house!”

The junior winger had plenty of reason to celebrate. The Newburyport boys’ hockey team had defeated local rival Triton — the other team that calls Graf home — overcoming an early 2-0 deficit to win, 5-2, in front of a capacity crowd.

For a Clippers squad that had started out 2-4 and was facing a 5-1-1 Vikings team, the impact of the win couldn’t be understated.

“This gets us back on track,” Archer said. “I feel like we knew that we could’ve won every single game we’ve played so far, and we just needed that one big game to keep us going.”

Archer led the Newburyport offense with two goals, and was one of four different Clippers to find the back of the net; the others were junior Colin Richmond, senior co-captain Ben Reynolds and sophomore Jon Groth.

But it was Triton that got on the board first.

Following a scoreless first period where the Vikings had most of the scoring opportunities, they finally broke through just over two minutes into the second. Junior James Tatro had his first shot blocked by Newburyport freshman goalie Jamie Brooks (24 saves), but fellow junior Jack Forrest scooped up the rebound and sent it back to Tatro for the second-chance goal. Junior Cael Kohan was also credited with an assist.

Less than two minutes later, Triton built on its lead with a short-handed goal by senior captain Brad Killion. After the Clippers won an attack-zone faceoff, Killion intercepted a pass from Archer, skated down the ice and across the front of the net before putting in the unassisted score.

Everything was going the Vikings’ way, until late in the second, when Killion was sent to the penalty box after colliding with Brooks on another breakaway shot attempt. The Triton team didn’t like the call, arguing that Killion was tripped into the collision by a sliding Archer, but the penalty stood, and on the ensuing power play, Newburyport capitalized.

After a long shot by Reynolds was blocked by Vikings freshman goalie Wesley Rollins, Groth picked up the rebound and passed it to Richmond in the slot, and Richmond buried it.

On the other side, Newburyport Coach Paul Yameen said: “I just think we needed to settle down. I think we play as many freshmen as we do seniors. You saw the atmosphere here tonight; we had a lot of guys with wide eyes, and it took us a period to settle down.”

The second period ended with Triton still in the lead, and it would stay that way for the first four minutes of the third, but shortly after that, Reynolds delivered the equalizer.

Senior co-captain Declan Sullivan wrestled the puck away from Tatro in the attack zone and pushed it over to Richmond, who passed it ahead to Reynolds in the slot for the finish.

The game remained in a deadlock for the next four-and-a-half minutes, but then Archer took over.

An attempted pass around the boards by Newburyport junior Anthony Lucci bounced off Tatro’s skate and landed on Groth’s stick. Groth’s ensuing shot was deflected, but it went straight to Archer, who sent a slap shot in to give the Clippers their first lead with 6:21 left to play.

Two minutes later, another puck sent around the boards was found in the corner by Groth, who tapped it back to Archer for a wrist-shot that extended Newburyport’s lead.

With less than two minutes to play, the Vikings committed a tripping penalty in an attempt to prevent an empty-netter, but Groth still found the back of the net on the power play, taking a pass from Sullivan, beating his defender and going top-shelf with his shot for the final score.

“There’s no one I’d rather play with,” Archer said of Groth. “He had big shoes to fill, but he’s the guy that’s stepped up big for us this year.”

Triton has now suffered back-to-back losses, following its 4-1 defeat at the hands of Masconomet last Wednesday. The Vikings return to Graf this coming Wednesday for a 7 p.m. game against Amesbury.

“You’ve got to put this one in the rear-view,” Sheehan said. “[The players] did everything that the coaching staff asked them to do. Sometimes the bounces don’t go your way, and it can snowball, and that’s what kind of happened in this game.”

On the other side, the Clippers (3-4) have won two of their last three, and are set to go on the road Wednesday for an 8:15 p.m. game at Lynnfield.

“Keep doubting us, keep telling us everything we can’t do and we’ll prove you wrong,” Archer said.