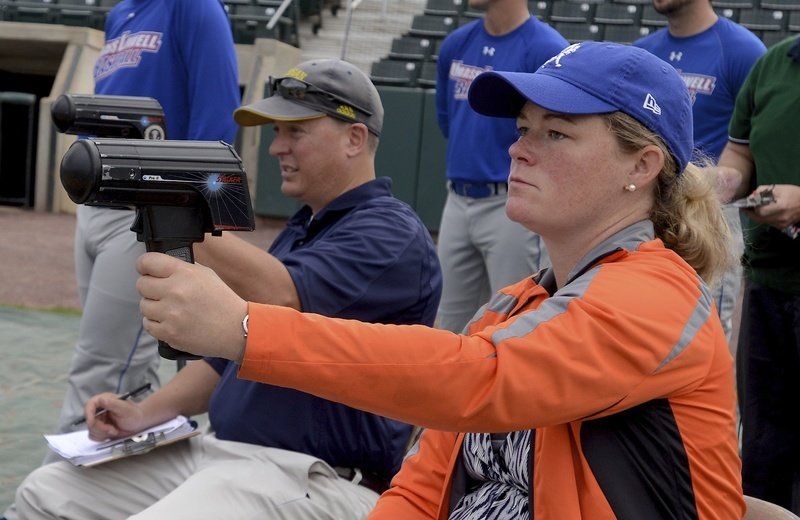 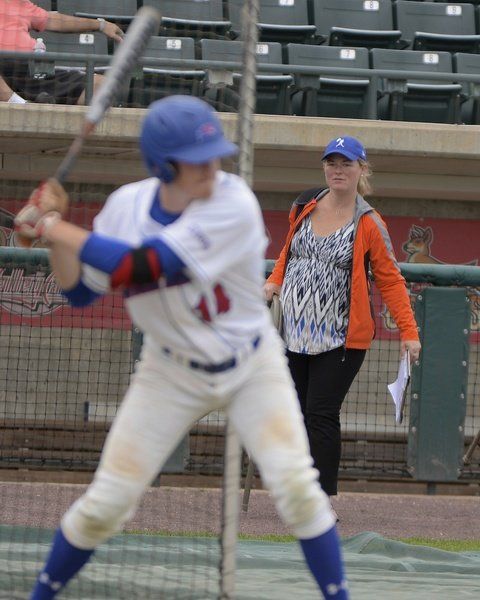 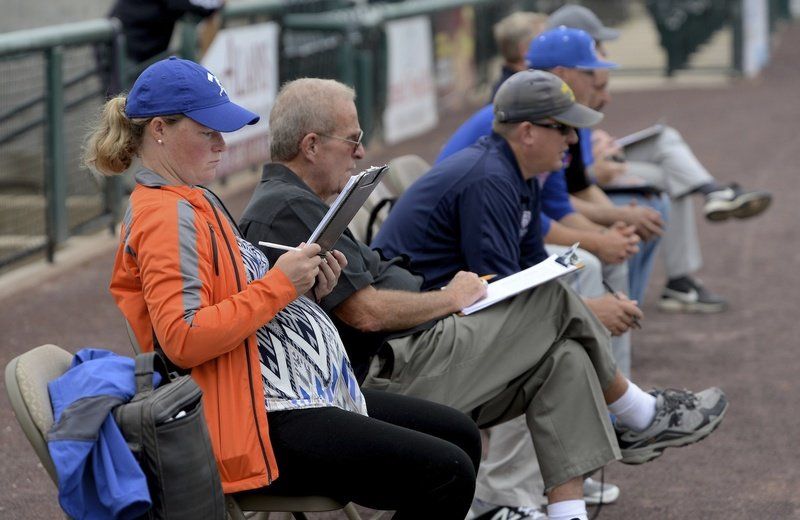 It was at her first spring sports registration in Mobile, Alabama when Robin Wallace faced the first major fork-in-the-road of her young life.

As she walked in with her mom, Wallace, only five years old at the time, saw two lines; one for softball and one for baseball.

Today, at 37, Wallace is still in the baseball line.

In fact, she’s started her own line, of sorts. The mother-to-be from Newburyport is the only full-time Major League Baseball scout in the country.

Hired in March, the lawyer by trade, is looking for the best talent in the northeast.

”Baseball is my passion,” said Wallace. “I was an only child and lived in a neighborhood with only boys. So everyone played baseball. It was no big deal.”

Wallace’s route to being a baseball player and eventually a scout wasn’t so easy.

She became first girl to play baseball at private middle school in Alabama. While she played softball as a freshman in high school, starting as a catcher.

”I compare it to squash, racquetball and tennis,” said Wallace. “They all are racquet sports, but they’re not the same games. The field is different. The ball size is different. The thinking and timing are different, too.

”I was a pitcher,” she noted. “I was a curveball pitcher. That didn’t translate in softball. I tried. But I wasn’t that good throwing underhand. I love baseball.”

She quit softball after one season and turned her sights back on baseball, making headlines in her town after she wasn’t allowed to tryout for baseball the next two years.

Wallace later transferred to a high school that was coached by the same guy who coached her in middle school. She was welcomed on the team. There were some very difficult times, including injunctions, newspaper stories and, well, people who weren’t so understanding of his passion for the game.

”One time, the opposing pitcher hit me with the first pitch,” recalled Wallace. “My teammates ran onto the field after the pitcher. It was a incredible experience. My teammates were always great, very understanding. They had my back.”

While Wallace graduated from Tulane University with a liberal arts degree, with honors, her passion for baseball never wavered. In fact, it brought her to Lynn, Mass., where she took her love of baseball to another level.

She not only played for six years, beginning in 2003, in the North American Women’s Baseball League in Lynn and Nashua, she was a member of the first USA Baseball Women’s National Team in 2004, a team that won the gold medal.

In between, she also dabbled on the men’s independent league side of things as an assistant GM for the North Shore Spirit and GM for the Nashua Pride.

She was technically out of baseball after the 2009 season, after the women’s league folded, which enabled her to finish her law degree at Suffolk University, while also working as a private investigator to make ends meet.

There was one problem. It wasn’t baseball.

So in 2011 she went Baseball’s Winter Meetings and was introduced to the MLB’s Director of Scouting Frank Marcos. She told him she wanted to get back into baseball and with her experience as a GM, scouting intrigued her, as did baseball operations.

Marcos signed her up for MLB’s “Scout School,” in Phoenix, Az. in 2012, which was two weeks of baseball hell, spending up to 14 hours a day deciphering talent, watching video, writing up reports and projecting players’ futures.

”I barely slept, but I loved it,” said Wallace. “I did well in the class. I left there knowing it was what I wanted to do.”

But Wallace spent two years bugging Marcos about a potential position -- there are only 20 to 30 MLB scouts -- and thanks to her persistence, he offered her a position in March.

While each major league team has their own bevvy of scouts, that focus primarily on talent that is eligible to be drafted within the next year, MLB-hired scouts also scour young talent and prospects.

Wallace has been to several “Scout Days” put on by Boston-area Div. 1 college programs, showcasing their players. Last week she was at LeLacheur Park in Lowell watching UMass Lowell’s players.

What makes a good scout?

”Attention to detail, dedication and how hard do you want to look?” said Wallace. “It’s what you make it. The hours are long. You’re on the road, by yourself, all of the time. You have to be willing to find that needle in the haystack.”

All of the MLB-hired scouts send reports to the major league teams.

”Some teams have limited resources and we can help their own scouts,” said Wallace, who has her own law office on State Street in downtown Newburyport, working on civil litigation, family law and “a little criminal stuff.”

”We know it’s a boy,” said Wallace. “I guess it would be pretty hard not to know I’m a woman.”

As for being the only woman in a man’s game, Wallace said she has no complaints about the way she’s been treated.

”The veteran scouts have been unexpectedly nice, kind, helpful and friendly,” said Wallace. “I think they see that I take this real serious and love what I do. It’s not easy, the hours are long, but this is a labor of love. It’s not work to me. It’s baseball. Baseball will never be work to me.”