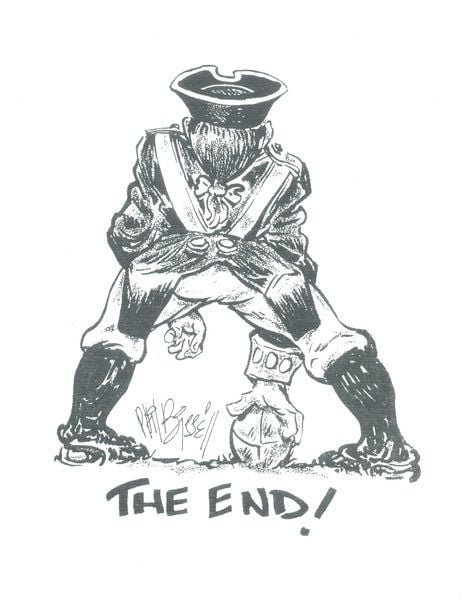 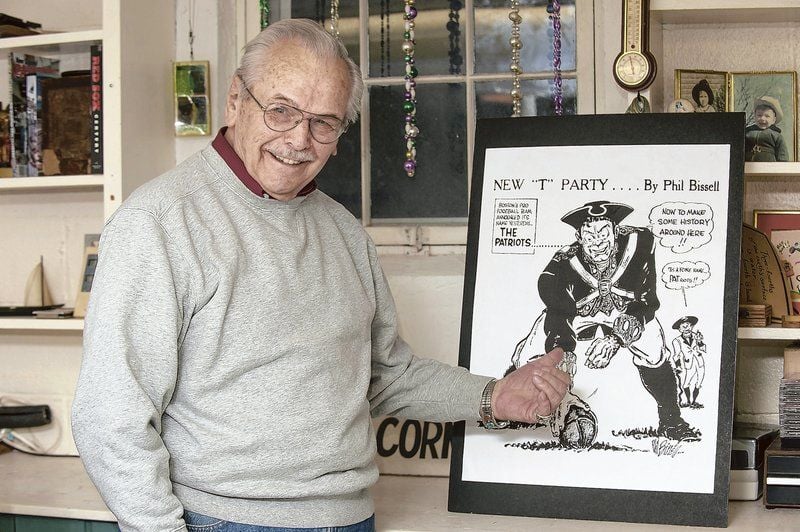 Desi Smith/Staff Photo. Cartoonist Phil Bissell talks about the beginning and the past in his new book “PatsPA,” at his Rockport home last week. Bissell is the longtime sports cartoonist whose work appeared in the Boston Herald, Boston Globe, Worcester Telegram and Gazette and a host of other papers. He’s the man who came up with the original logo for the New England Patriots, then-Boston Patriots. 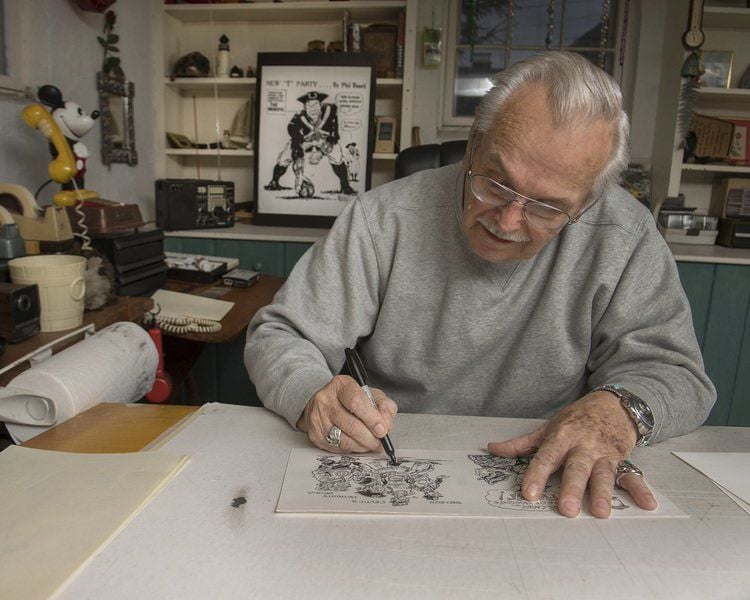 Desi Smith/Staff photosCartoonist Phil Bissell works in his basement studio at his Rockport home last week. Bissell, 88 years young, continues to work and has published a book called “PatsPA.” He’s the man who came up with the original logo for the New England Patriots, then-Boston Patriots. 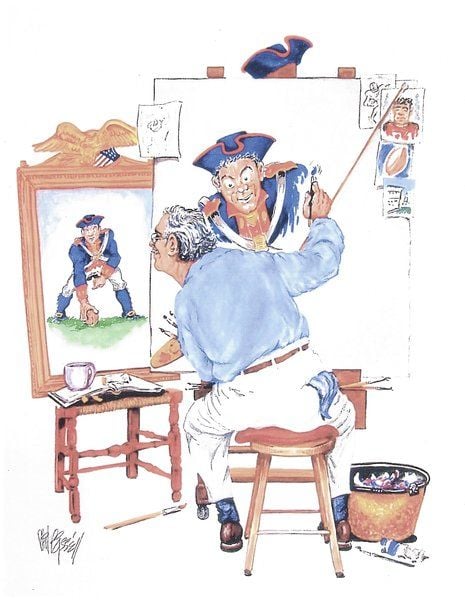 Desi Smith/Staff Photo. Cartoonist Phil Bissell talks about the beginning and the past in his new book “PatsPA,” at his Rockport home last week. Bissell is the longtime sports cartoonist whose work appeared in the Boston Herald, Boston Globe, Worcester Telegram and Gazette and a host of other papers. He’s the man who came up with the original logo for the New England Patriots, then-Boston Patriots.

Desi Smith/Staff photosCartoonist Phil Bissell works in his basement studio at his Rockport home last week. Bissell, 88 years young, continues to work and has published a book called “PatsPA.” He’s the man who came up with the original logo for the New England Patriots, then-Boston Patriots.

ROCKPORT — The iconic image of the Colonial Patriot hiking the football sprang from his mind and his hands in less than an hour, so Phil Bissell’s license plate on the red Mercedes sitting in his Landmark Lane driveway seems appropriate enough:

Bissell, 88, is indeed that, at least in a micro context.

While the late Billy Sullivan was the father of the New England (nee Boston) Patriots, as the founder and owner of the original-eight American Football League franchise, Bissell supplied the franchise’s most iconic image — the Pat Patriot logo that graced the team’s helmets from 1961 to 1992 before the franchise bowed to pressure from the National Football League and went with the current Flying Elvis logo.

“I have two real sons, Steve and Chris, and I consider Pat to be my third son,” Bissell said one afternoon recently while sitting in his living room.

The story of how Pat Patriot came to be is just one of dozens included in Bissell’s new book, “PATSPA!: 65 Years of Cartoons, Caricatures & Creating a Football Icon.”

That Patriots image, regarded by many as one of the best and most emblematic logos ever to adorn a pro football helmet, actually started as a sports cartoon in the Boston Globe in 1960, where Bissell worked as a cartoonist from 1953 to 1965.

Sullivan, a former sports promoter, knew he had to find a name that would be immediately accepted by the Boston fans, as well as one that would tap into the culture of Boston. He knew he needed to create a buzz for the fledgling league that — against almost all advice — was taking on the mighty NFL.

The actual genesis of the name is murky. Some accounts had Sullivan assembling a panel of sportswriters to come up with a name. Others — including Bissell’s ­­— said Sullivan initiated a public contest to allow fans to suggest a new moniker for the franchise, with 74 fans voting to name the team the Boston Patriots.

Either way, the team became the Boston Patriots.

“Right after that, the Globe said to me that you’ve got to do a cartoon,” Bissell recounted.

So, on April 18, 1960 — interestingly enough, the 185th anniversary of Paul Revere’s legendary midnight ride — Bissell sat down at his desk in the Globe newsroom. Within 45 minutes, he had come up with the rendering of the grizzled and intense Colonial soldier hiking the football. That cartoon was on the front page of the Globe the next day.

“I drew him and I named him and then he was stolen from me by Jerry Nason,” Bissell said, referring to then-Globe sports editor Jerry Nason. “I sat down and within 45 minutes it was ready to go to press.”

According to Bissell and his account in his book, Nason took the original drawing and gave it as a gift to Sullivan, who then decided that the Pat Patriot logo would be the Patriots’ official logo for the 1961 season — replacing the hideous tri-corner cap logo the team wore in its inaugural season.

“The following Monday, I received a phone call from Pat’s new parent thanking me for releasing my son to him,” Bissell wrote in his book. “I held back my tears as I informed Mr. Sullivan that I never offered to give him up or was I even given the chance to hug him, just once, before he ended up in his new parents’ arms.”

Sullivan, he wrote, ultimately paid him $100 to use Pat as the team logo.

The logo story is just one of dozens included in the new book that was more than a decade in the writing and features a stream of Bissell’s cartoons hearkening back to the old-school of American sports journalism that relied heavily on the cartoon to pinpoint the events of the day.

Bissell estimates his cartoons have included more than 60,000 faces of athletes, politicians, celebrities and even local high school and college athletes. Many of them are reproduced in the book, along with the stories behind them.

In many ways, the book is a stroll through Boston sports history.

There’s a 1950 cartoon titled “The Braves’ Big Three” that shows the great Boston Braves rotation of Warren Spahn, Johnny Sain and Vern Bickford, long before the Braves pulled up stakes for Milwaukee and then Atlanta.

There are four of Ted Williams, including one that commemorates the 1966 vote that sent The Kid into the National Baseball Hall of Fame, as well as others featuring Carl Yastrzemski, Luis Tiant, Don Zimmer, Carlton Fisk and Jim Piersall.

There’s Bill Russell, John Havlicek, Tommy Heinsohn and Bob Cousy of the Celtics. There’s one of Bobby Orr that ran soon after the Bruins legend signed as a free agent with the Chicago Blackhawks in 1976. That cartoon, which borrows richly from James Earle Fraser’s “The End of the Trail,” shows Orr wearing a feathered headdress.

There are cartoons that were done in the glory days of Boston boxing, featuring featherweight Tommy Collins, welterweights Tony DeMarco and Joe DeNucci and Brockton heavyweight Rocky Marciano.

There’s one for the late longtime Celtics owner Walter Brown that today hangs in the Basketball Hall of Fame in Springfield. In fact, Bissell’s artwork is featured in three halls of fame: baseball, basketball and football, as well as in two presidential libraries (Gerald R. Ford and Dwight D. Eisenhower) and several sports museums around the country.

There are cartoons of legendary old-school Patriots such as Jim Nance, Gino Cappelletti, Babe Parilli, and first coach Lou Saban.

On and on it goes, including Bissell’s work from his time at the Worcester Evening Gazette, the Boston Herald American and the Lowell Sun.

Bissell’s sports reach also extended beyond Boston with cartoons of Willie Mays, Roberto Clemente, Vince Lombardi, Gordie Howe and Hank Aaron. And lest you think he stopped at sports, there are also works featuring Ford, Eisenhower and Winston Churchill.

His favorite subject, however, was Muhammad Ali.

“He really was the greatest,” Bissell said.

The book also features some of Bissell’s drawings that adorned the Patriots’ game-day programs, as well as his work from Boston’s college sports scene.

“Everybody always told me I should do a book,” Bissell said. “But I didn’t care about doing a book.”

That changed when Beverly, his wife of 55 years, died in 2003. Bissell realized he wasn’t recovering very quickly from his grief. A book, he thought, might just be the ticket to tie together the decades of drawing cartoons from the very heart of the Boston sports scene and as a vehicle to honor the woman who was by his side for all of it.