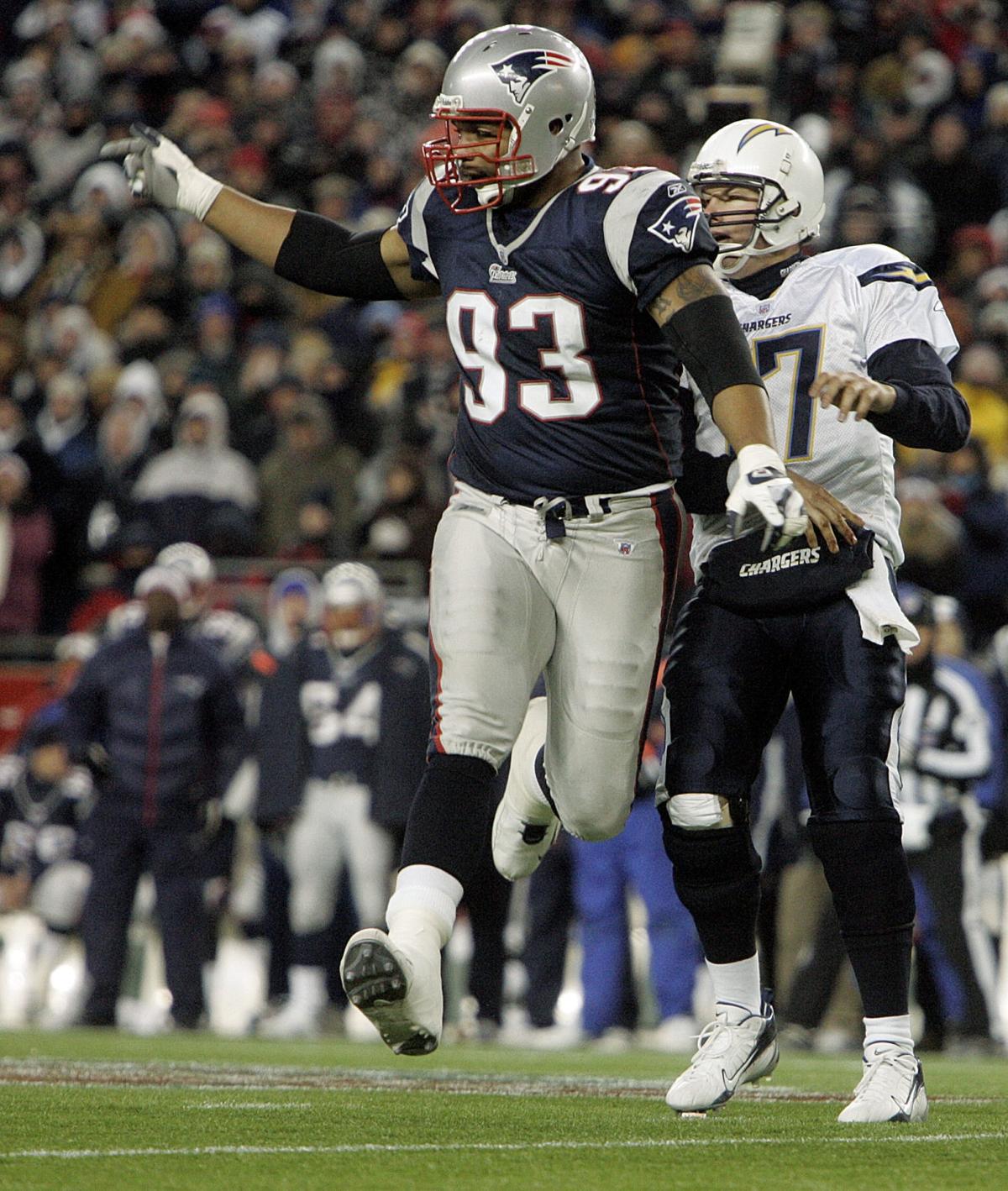 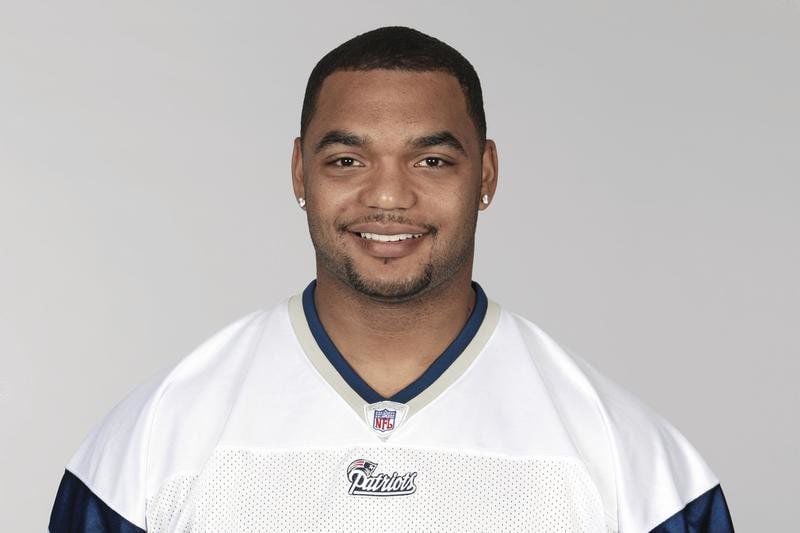 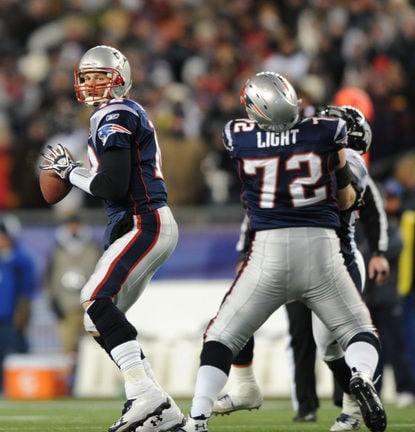 Patriots left tackle Matt Light (72) has helped keep Tom Brady upright on his way to another MVP-caliber season. Light will try to win his fourth Super Bowl ring on Sunday. 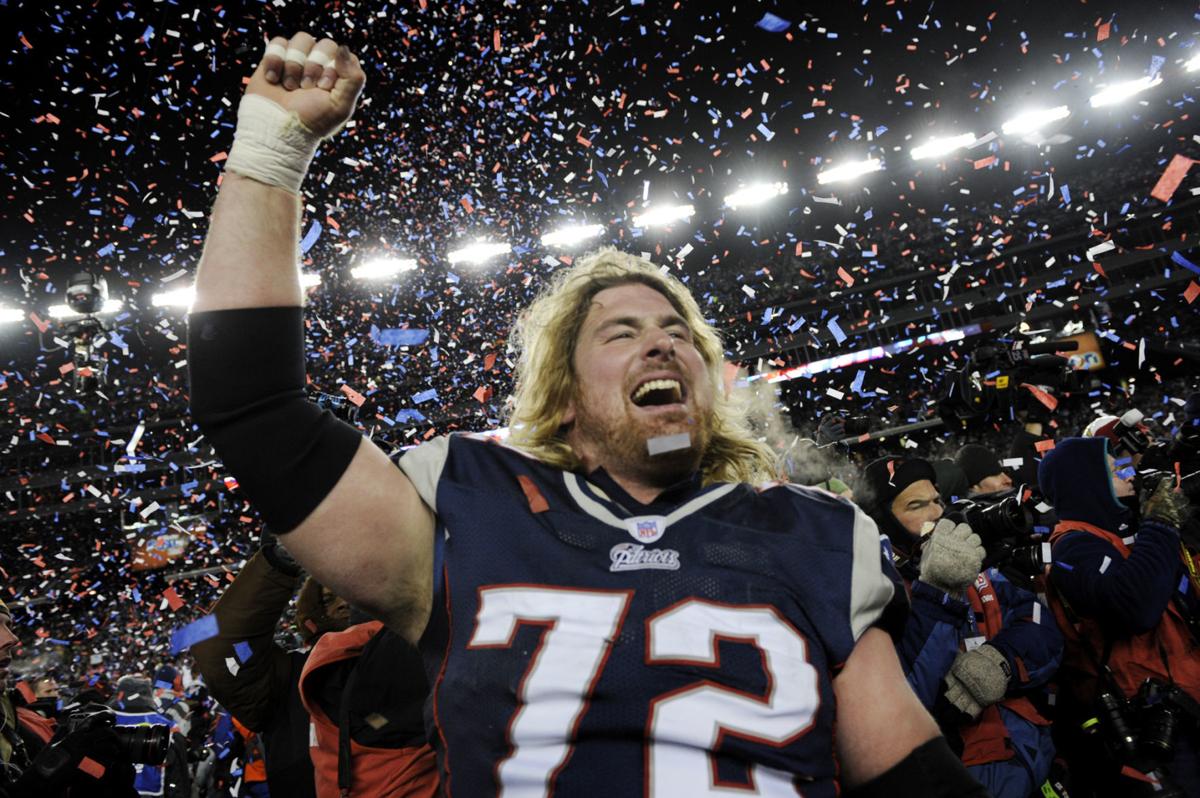 Foxborough: Matt Light celebrates after the Pats beat the Chargers 21-12 to win the AFC Championship.Photo by Paul Bilodeau/Eagle-Tribune. Sunday, January 20, 2008

There are many possible dates that could be construed as the beginning – i.e. the Immaculate Conception – of the Patriots Dynasty.

From the hiring Bill Parcells, or the drafting Drew Bledsoe, or Bob Kraft buying the team, or the unexpected Super Bowl berth against the Packers, or the hiring of Bill Belichick, or the drafting of Tom Brady, or my favorite, the Adam Vinatieri’s kick in the Snow Bowl.

But I got another, unheralded date, near the end of that long, legitimate listing of “igniting” greatness:

That was the day the Patriots drafted defensive tackle Richard Seymour, seventh overall in the first round, and then, made a trade in the second round to move up two spots (50th to 48th) to take offensive tackle Matt Light.

The rest of the draft didn’t matter.

Seymour and Light were every bit as important and dominant at their positions almost from the first games as pros, en route to the Patriots winning three Super Bowl titles in their first four seasons.

Last Monday was a big day. Seymour was voted by the fans as the newest entry into the Patriots Hall of Fame. Light, who has made Foxboro his full-time home with his wife and four children, was inducted two years ago.

Seymour is a favorite to be in the Pro Football Hall of Fame in 2021, while Light deserves consideration.

Seymour disrupted offenses as a Patriot from 2001 through 2008, while Light had Brady’s blind side covered through the 2011 season.

They faced off often in practice.

But Light knew what he was getting into. His Purdue team faced Seymour’s Georgia squad the year before in the Outback Bowl, a 28-25 overtime win by Georgia.

“They had an elite defensive line,” recalled Light. “Like I’m talking future NFL first round picks everywhere. But he was one of the guys we singled out. We can’t let this guy wreck the game.”

Come draft day 16 months later, Light was one happy camper when he heard Seymour would be his teammate. But practices were more difficult for Light.

“Seymour was the kind of guy that always had a way of getting that last push, that last shove,” said Light. “He was a nasty player, but I say that with the utmost respect. That was sort of my way, too, bringing a street fighter’s mentality to the field. Street fighters act first.”

There were some great players on those early 2000s Patriots teams. Seymour, as far as Light was concerned was near the top of the list, right there with Brady.

“He was as talented a guy you’d ever ask for,” said Light. “A lot of great players are great in one area. Not Richard. He could do it all, inside, outside. It didn’t matter. Aside from his ability to play everywhere, he also had a very unique set of skills and body type to do it all. He was tall. He was an athlete. He was tough. They just don’t make them like Richard.”

Light was no slouch himself.

His decade was a big one for left tackles, and easily lost in the shuffle with Seattle’s Walter Jones, St. Louis’s Orlando Pace, Baltimore’s Jonathan Ogden and New Orleans’ Willie Roaf.

But Light was there with those guys, not only protecting probably the greatest quarterback that ever lived during easily the greatest run of the 2000s decade (five Super Bowl berths in 11 seasons), but the right defensive ends he faced were Who’s Who of pass rushing stars.

“Don’t remind me,” said Light. “It was Jason Taylor in Miami; Aaron Schobel in Buffalo; John Abraham with the Jets; That six games a year. And don’t forget we usually played the Colts, sometimes twice, which means Dwight Freeney and Robert Mathis. You just didn’t get a break.”

You could make the argument that Light, when you include the Jevon Kearse’s and Shawne Merriman’s, first- and second-tier game-changers, did it in the toughest era of passing rushing greats.

“Richard did it when there was so much great talent, but he was really the best,” said Light.

While Seymour had some financial differences with Belichick, which ended up getting him traded to the Oakland Raiders for a first round pick, Light said this was the right thing to do, getting Seymour back “home” in the Patriots Hall of Fame, where he belongs.

“A great guy and a great teammate,” said Light. “I tell people, Richard wasn’t just great – he was special. I look forward to him coming back for the ceremony.”

Seymour and Light might be the best work Belichick ever did on April 21, 2001. And the proof is in the Patriots Hall of Fame.