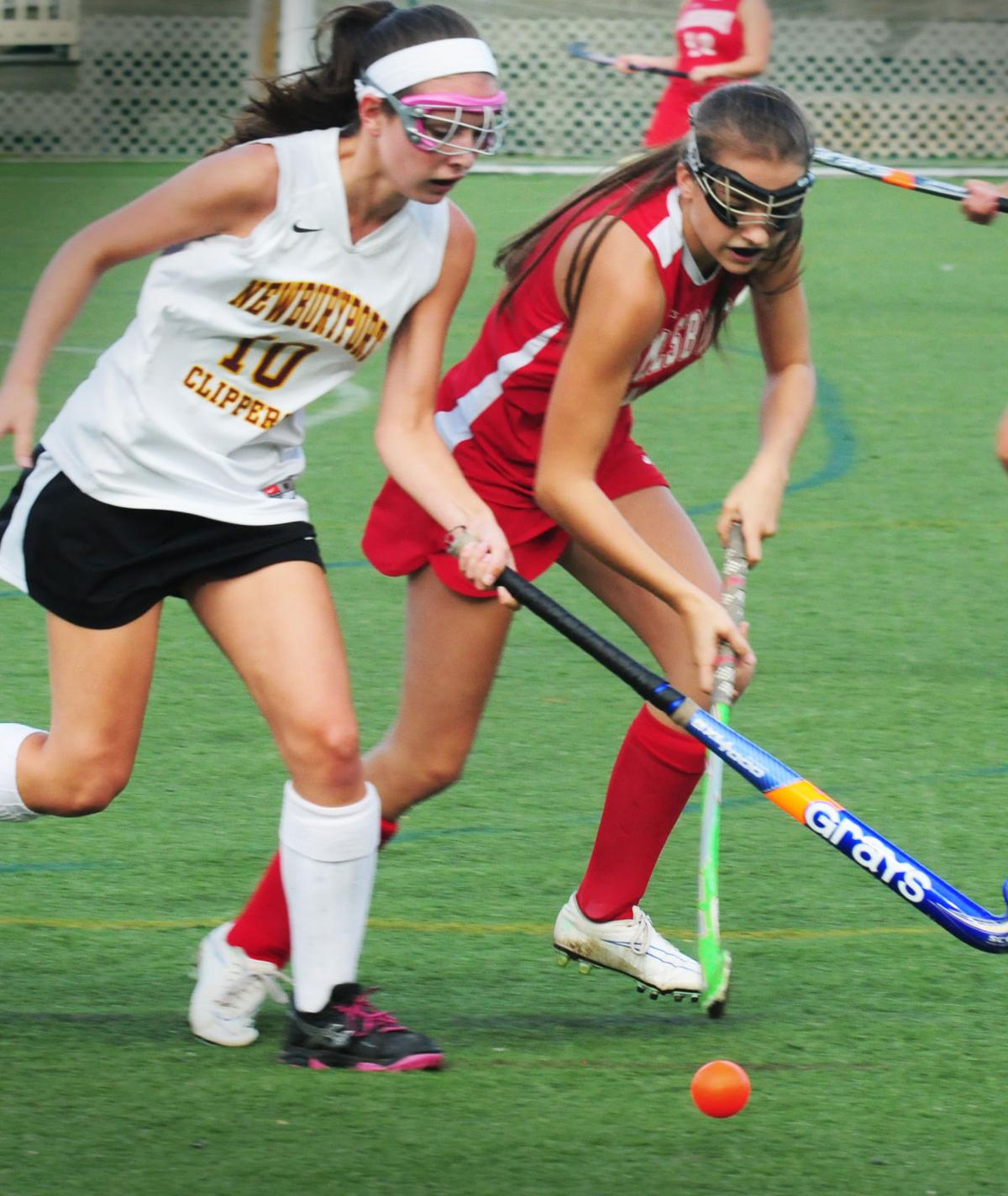 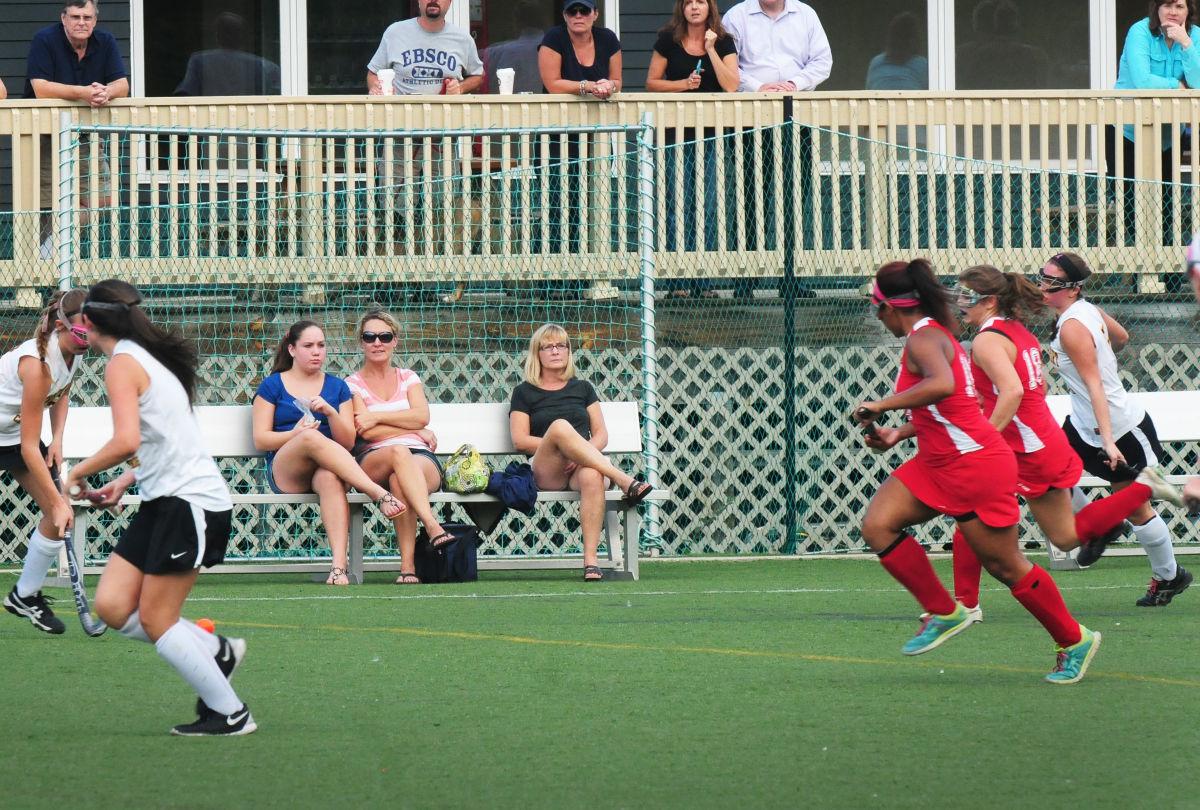 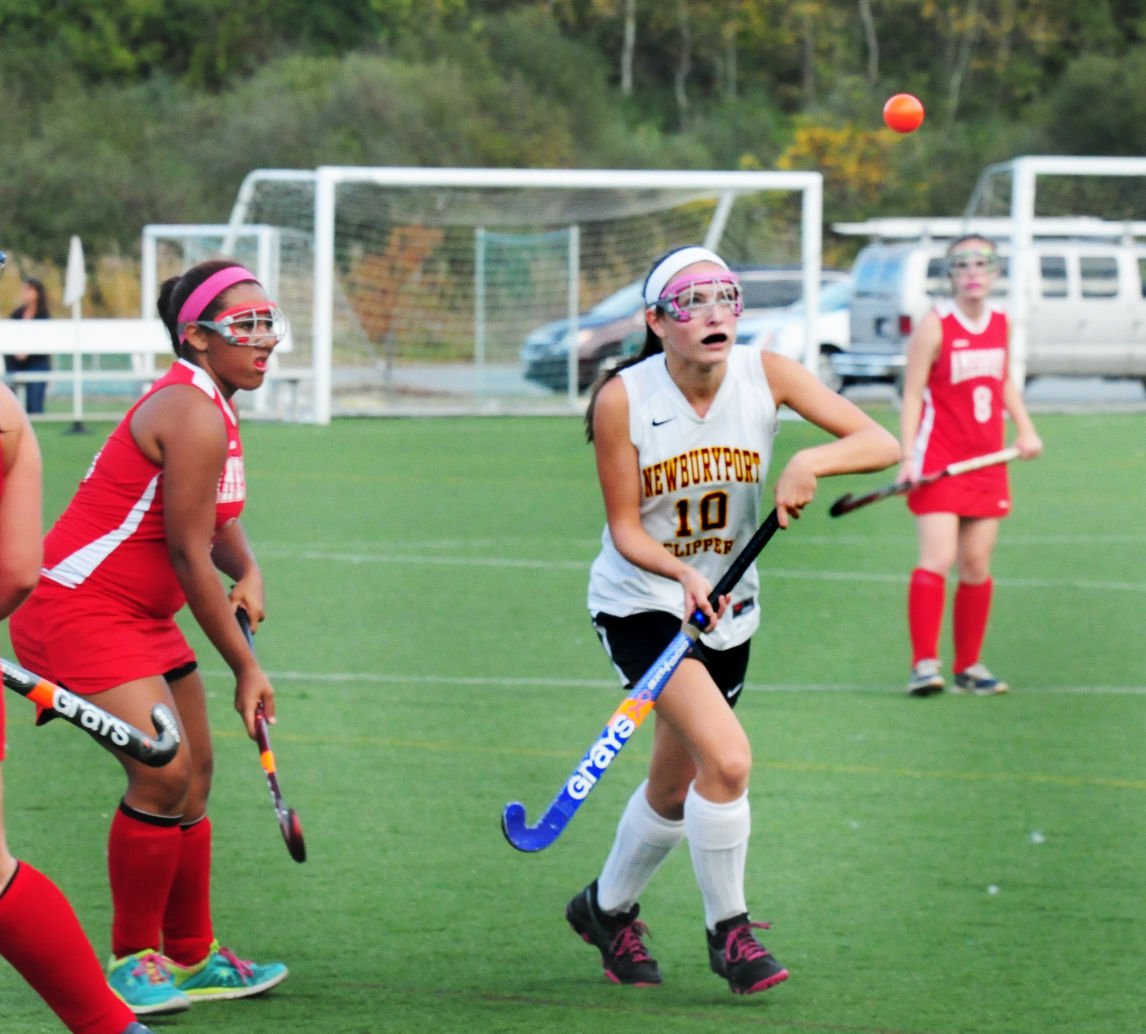 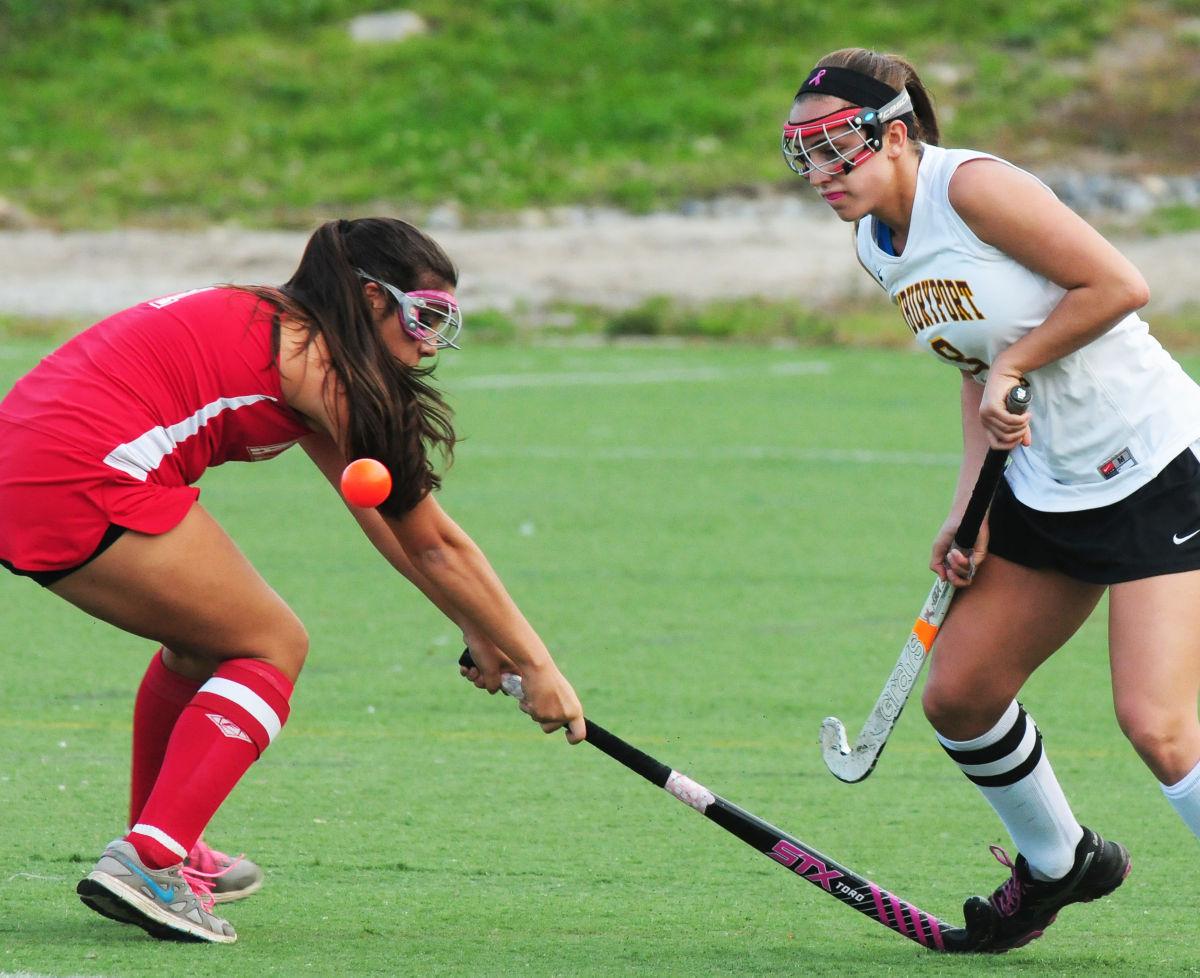 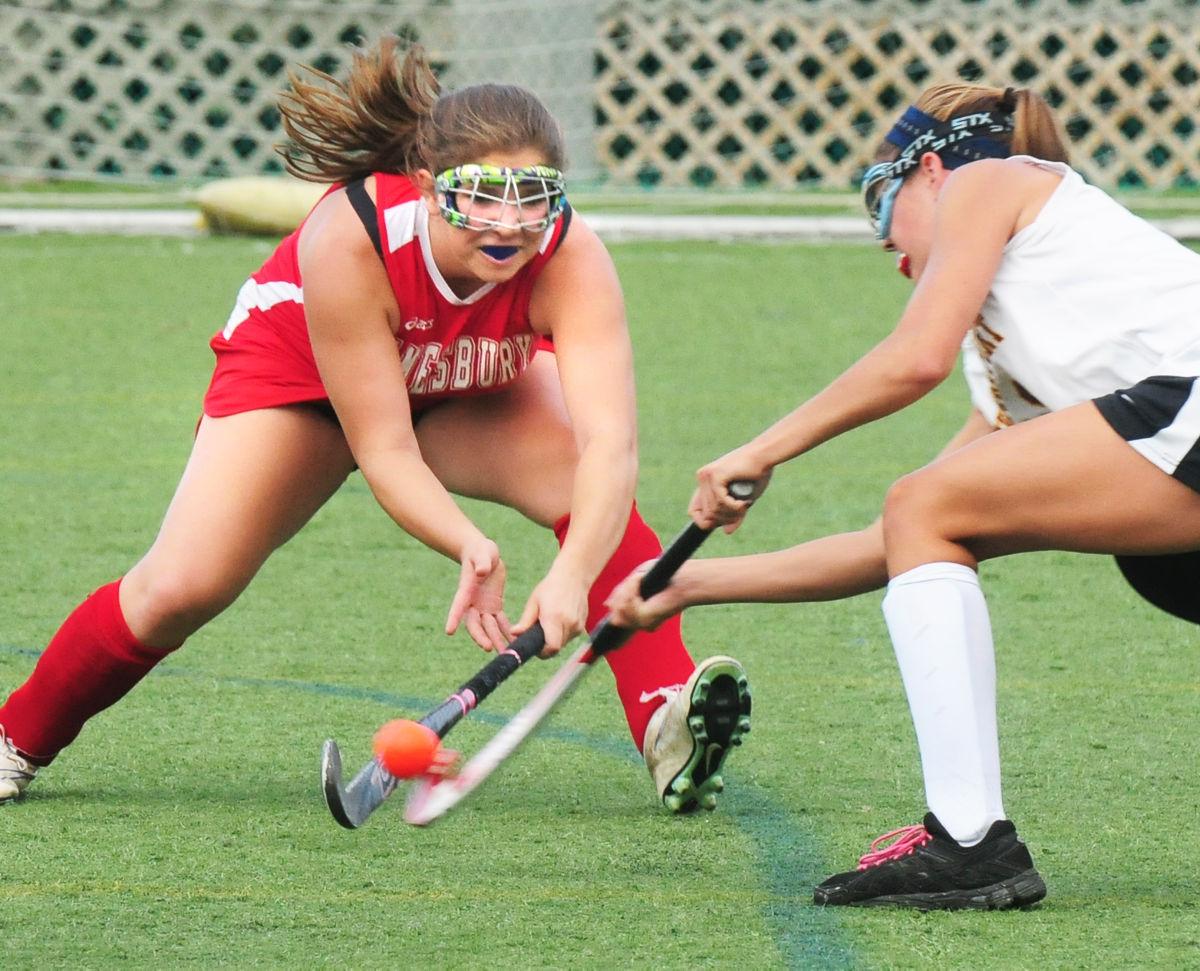 AMESBURY — Yesterday’s field hockey game between Amesbury and Newburyport was shaping up to be an old-fashioned defensive duel, but then the two teams exploded for a combined four second-half goals, with Newburyport pulling ahead for a 4-1 win.

Amesbury showed some fight early in the second half, as senior Kate Gagnon came out and put home what at the time was the game-tying goal just 5:11 into the half. Her poise was not lost on Indian coach Beth Noseworthy.

“Kate Gagnon has come through for us time and time and time again, not just in her scoring but in her effort to get the ball to net. She’s an incredible player,” Noseworthy said after the game. “Her intensity and her ability to sort of curve on the left and get the ball to net is insane. She’s always in the right place. To watch them tie it up was a great moment for our team.”

Of course, the goal was even more exciting given how difficult it has been for the Indians to score this season. Gagnon’s today was just the fifth the team has scored all fall.

To Newburyport’s credit, the Clippers responded almost immediately. Caroline Marino scored her first of two goals just 2:35 later to re-take the lead. Coach Lauren Hefferan noted that her team’s quick response and continued pressure offensively was a nice, if not necessary, sight to see.

“We can’t back off. There’s been a couple of games where we’ve completely dominated the whole game and we’ve tied or we’ve lost to them,” she said. “It’s about pushing through and getting that result that we want.”

They almost didn’t have their way, thanks to Amesbury sophomore goaltender Abbie Sartori, who is in the midst of a breakout season. Through the team’s first 10 games she had allowed only 12 goals, good for a 1.20 goals against average (GAA); and while that number has gone up recently due to a stretch of tough opponents, you won’t find a soul with anything but glowing remarks for the young goaltender.

Hefferan in particular was impressed.

“I thought she did a great job in there, she made a ton of saves,” she said. “She was very aggressive to the ball, she cleared the ball well. She just took the angle away and took a lot of our shots away.”

That the Clippers still managed 13 shots on goal is a testament to the work they put in on offense. At times Sartori looked like the Flash in net; if you blinked, you’d miss the three saves on opposite sides of the net she’d just made.

“She’s the anchor of our team, she truly is,” Noseworthy said. “And somebody that I consider one of my leaders on my team without the title of captain. She keeps the team up, in the game, she doesn’t get down. She’s just a phenomenal kid.”

Though the Indians have struggled on offense this season, the team did a good job moving the ball yesterday, and had it not been for Clipper senior Megan DesAutels’ terrific work in goal, Amesbury might have put a few more home.

Every time the Indians came close to scoring a goal — or even threatened to enter the circle — DesAutels aggressively challenged the opposing forwards, shouting out demands to her defense in front of her. She was a general commanding her army, and it worked.

“I can tell when the offense and midfield is really pressuring the ball and it makes it easier, but I’m always constantly watching the ball. I don’t lose sight of it,” DesAutel said. “There were some times when they all just swarmed down on our [defense] and we needed to get back, but overall I think we handled it pretty well.

“We were aggressive toward the ball today,” she continued. “We cut toward the ball, used a lot of one-touch passes which was really helpful for us. We just worked well as a team today.”

Newburyport improves to 8-3-3 overall and now sits just two points away from qualifying for the state tournament, meaning their next win punches the ticket. Amesbury is now 2-9-3.