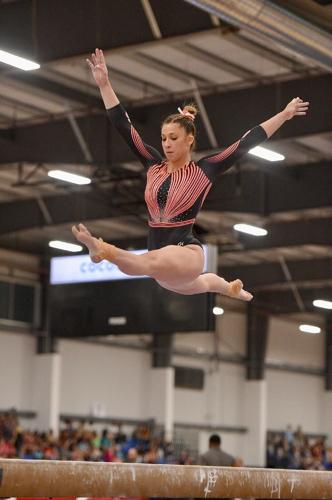 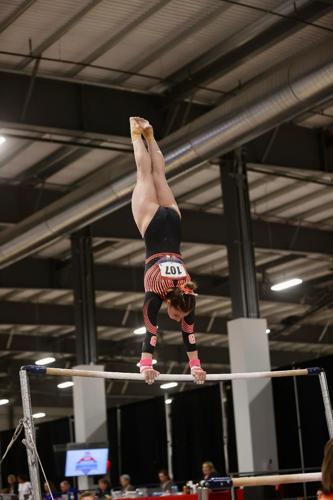 Triton's Isabella Savino made the most of her opportunity at the National Gymnastics Meet in Mesa, Arizona last month. 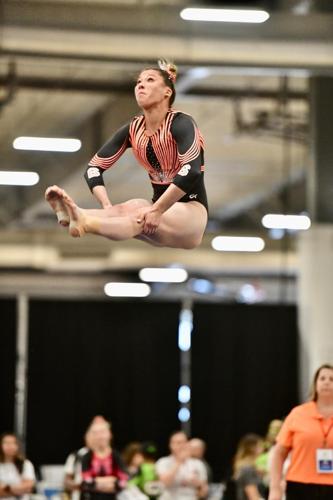 Triton's Isabella Savino made the most of her opportunity at the National Gymnastics Meet in Mesa, Arizona last month.

Isabella Savino tried her best to fight it, but as she stood waiting to compete in her first event at the National Gymnastics Championship out in Mesa, Arizona last month, the nerves started to wash over.

Could you blame her, though?

This was everything the 18-year-old Rowley native and recent Triton graduate had been working towards since she first got involved with the Ace Gymnastics program in Ipswich at age 3. But, it was a moment she unfortunately questioned far too much over the years if it would ever happen.

You see, Savino’s story is one of perseverance.

Much like gymnastics as a sport itself, it’s one of self-learning.

So after faltering a bit on the bars, and falling on the beam — her first two events at Nationals — Savino had to take a deep breath and have a short talk with herself.

“I was just asking myself why I was so nervous?” said Savino. “This was my last meet as an individual gymnast, and I had to give it my all. I deserved to be there, I’ve put in the work, and I just had to remind myself of that.”

In the moment, though, that was much easier said than done.

Like many gymnasts, Savino started getting serious about competing when she joined the Junior Olympic team in the first grade. She’s been training with coaches Amy Patch and Christine Potamis at Ace Gymnastics for well over a decade at this point, and worked her way up to being the only Level 10 gymnast — the highest level one can achieve before “going pro” — in the gym a couple of years ago.

But even that, by elite gymastics standards, is a little late.

Over the years, Savino has had to deal with a slew of injuries, including a broken back and a broken foot. and it goes without saying that those are two crucial parts of the body for a gymnast. The recovery process, especially from the broken back, took valuable years away from her development, and when she returned she basically had to re-learn routines in ways that wouldn’t aggravate anything. and oh yeah, don’t forget about COVID completely halting the way our lives operated for over a year.

Some who experience that amount of misfortune may have just called it quits.

But that wasn’t an option for Savino.

“Gymnastics is all about self-learning,” she said. “You’re always trying to learn something new at every meet you go to. When I broke my back, I initially had to learn to just sit there and not do anything, which was very difficult. and it was tough to come back from that. and when I did it was learning new ways to compete around my injuries.”

Savino was making her first trip to Nationals, and she earned that opportunity after placing third at the 17-plus Mass. Level 10 State Championship with an all-around score of 36.725, and fourth at the Level 10 Regional Championship with an all-around score of 36.450. The top placers at each of the Regionals around the country qualified for Nationals, which ended up welcoming in just over 50 gymnasts to Arizona.

Basically, it was 50 of the top high school gymnasts in the country.

But for many who Savino was competing against, this was their fourth, fifth or even sixth time qualifying for Nationals. Some had already been classified as Level 10s for six years, while Savino was just a second-year Level 10 making her first National appearance. In other words, it’d be like a rookie quarterback going up against a team of Tom Bradys in the Super Bowl.

The experience gap was real.

But after that talk, after reminding herself about all she’s had to fight through to get to this point and that she deserves to be there, Savino turned it around. She landed a 9.350 on the vault — her favorite event — and came back with a 9.475 on the floor to finish in 44th overall with an all-around score of 36.050.

It wasn’t perfect, but that was hardly the point.

“It was awesome, the greatest experience ever!” said Savino. “All of these girls were sixth-year Level 10s, and this was only my second year as a Level 10. Being on the same competitive level as them, it was definitely validation of all of the work I’ve put in. It didn’t go exactly the way I wanted, but to be among the top-50 in the country is something I’m definitely proud of.”

And Savino’s career is far from over.

In October, she was offered to compete on the gymnastics team at Division 1 Long Island University, and she committed shortly after. It was a “risk” LIU coach Randy Lane took with Savino being a relatively new Level 10 gymnast who, at that point, had never competed at Nationals before.

“I was over the moon,” said Savino, who will be studying biology in LIU’s honors and premed cohort program. “For a college like that to see my gymnastics and think I was good enough, having never been to Nationals before, I was ecstatic.”

Knowing Savino’s story, it’s safe to say that “risk” will probably pay off.