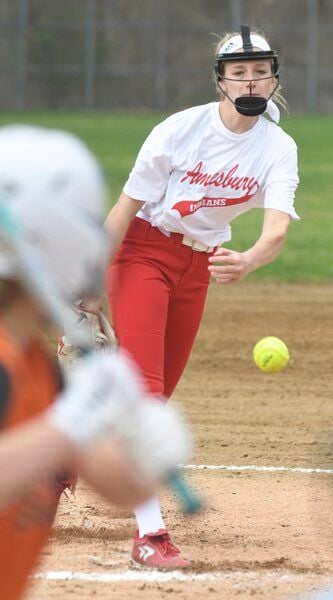 JIM VAIKNORAS/Staff photoAmesbury's Olivia DeLong, shown here pitching as a freshman in 2019, has taken her already impressive game to new heights this spring as a junior. DeLong has now pitched back to back no hitters and has yet to allow a run this season. 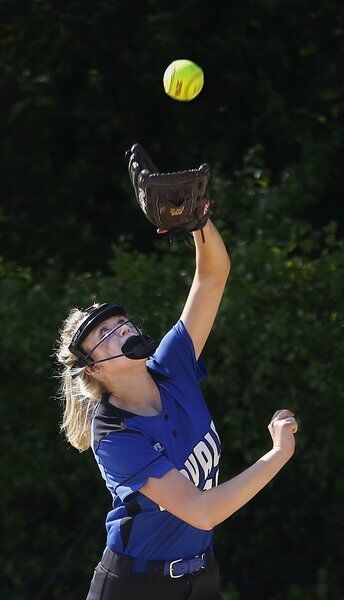 MIKE SPRINGER/Staff photoGeorgetown's Lily Caplin will be among her team's top returning players next spring.

JIM VAIKNORAS/Staff photoAmesbury's Olivia DeLong, shown here pitching as a freshman in 2019, has taken her already impressive game to new heights this spring as a junior. DeLong has now pitched back to back no hitters and has yet to allow a run this season.

MIKE SPRINGER/Staff photoGeorgetown's Lily Caplin will be among her team's top returning players next spring.

AMESBURY — When Olivia DeLong's freshman season was finished, it was hard not to be excited about what might come next.

The young Amesbury pitcher was lights out in her first year of high school softball. An All-CAL selection, DeLong posted a 1.22 ERA with 52 strikeouts in 46 innings and a no-hitter while also dominating at the plate, batting .520 with 39 hits, 31 runs, 26 RBI and two home runs. She picked up a win against perennial CAL power North Reading and helped lead the Indians to the 2019 Division 3 North semifinal.

DeLong never got a chance to take the field as a sophomore thanks to the pandemic, but she still spent the last two years working at her craft, and this spring the junior has shown that as good as she was to begin with, there was still plenty of room to grow.

Now? It's the rest of the league that's never had a chance.

DeLong is currently in the midst of one of the greatest all-around seasons in area history, enjoying unmatched production both as a pitcher and at the plate. While she does not pitch every game as many starters do in softball — she doesn't need to with equally dominant classmate Alana Delisle to share the load — she has been effectively unhittable whenever she's stepped into the circle.

And that's no exaggeration either.

In her past two starts DeLong has posted back to back no-hitters, both of which came in five-inning mercy rule wins, and adding in a quick two-inning appearance against Hamilton-Wenham she now has a hitless streak of 12 innings dating back to her May 12 relief appearance against North Reading.

Overall DeLong has only allowed three hits, two walks and no runs in 21 innings on the season, and in the process she's effectively mowed down everyone she's faced, posting 46 strikeouts, good for 2.1 per inning out of a possible three.

It's been a similar story at the plate too.

If batting over .500 as a freshman wasn't good enough, DeLong is now averaging an area-best .759 (22 for 29) while adding 19 runs, 22 RBI and three home runs. She's tallied at least two hits in every game, including five games with at least three hits, and in her last three games she's gone 10 for 12 with eight runs, nine RBI and two home runs plus the back-to-back no hitters.

On a team with seven regular starters who are batting .400 or better and a second ace in Alana Delisle who has arguably been just as good (0.88 ERA and 49 strikeouts in 24 innings), DeLong has separated herself as one of the greats in a program that has seen no shortage of elite players come through the ranks.

That's bad news for the rest of the Division 3 North contenders, who will at some point have to face DeLong as the tournament begins later this month.

Much like DeLong two years ago, Triton freshman Kyla Story has gotten off to a brilliant start in high school and currently ranks as the area leader in hits (25) while posting an outstanding .625 average. Story has been the top batter in a Triton lineup that has consistently ranked among the league's most explosive, and she also boasts a team-best 20 runs and 20 RBI to help power Triton's production.

Triton collectively has played great lately and is now back above .500 with a 6-5 record heading into the final week of the regular season. Coming off arguably the best year in program history in 2019, the Vikings have quickly reloaded and could be a tough out in the Division 2 North tournament.

Newburyport softball is back on the upswing, having won three straight to climb back above .500 following a four-game skid midseason. One of the key figures in the turnaround has been sophomore Madeline McLeod, who has seen her playing time and production improve significantly over the past couple of weeks.

After making her first appearance in Newburyport's fourth game at Lynnfield and then going 0 for 6 in her first three games, McLeod has since gone 8 for 14 with seven runs and eight RBI over the Clippers' last four games, three of them wins. McLeod has tallied two RBI in each of those four games, with two runs and at least two hits in three of those. Her best game was her most recent, when she went 3 for 4 with two runs and two RBI to help the Clippers beat Pentucket last Tuesday.

Pentucket's Bailey Stock has quietly put together one of the best hitting seasons in the area this spring. The junior, who typically bats towards the bottom of the order, is tied with teammate Sarah Sargent for the team's top batting average (.462) and has given Pentucket a significant lift all season.

In addition to Stock and Sargent, Megan Codair (.421), Charlotte Latham (.386) and Meg Hamel (.382) have all enjoyed standout seasons at the plate for Pentucket as well.

With standout pitcher Madeleine Mogavero set to graduate, Georgetown softball will look for its talented core of juniors to take the next step. Allison Mansfield has been the best of the bunch so far, batting .531 (17 for 32) with 15 runs, eight RBI and a home run this spring, and classmates Lauren Dullea (.406), Lily Caplin (.394) and Meghan Skahan (.324) have all shown promise in their first extended varsity action.