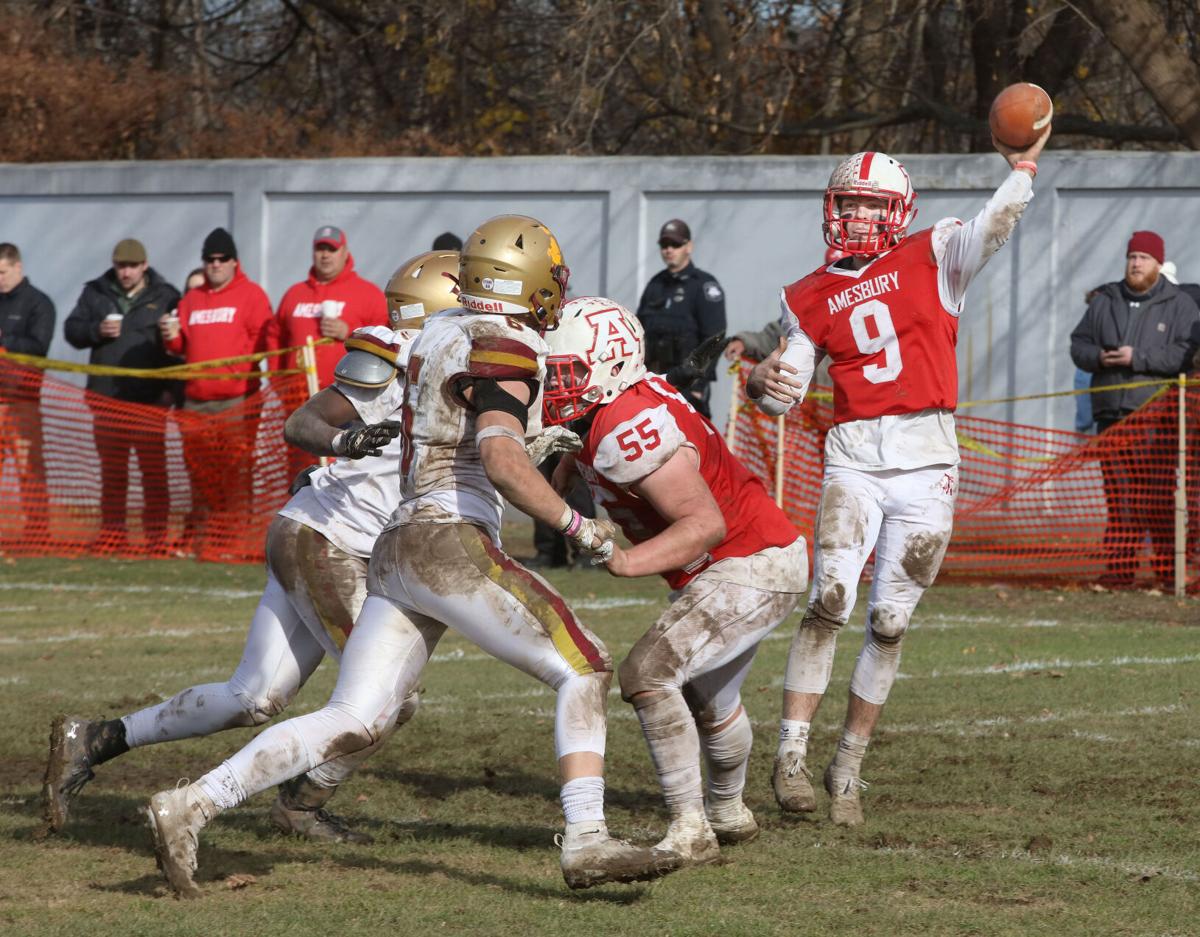 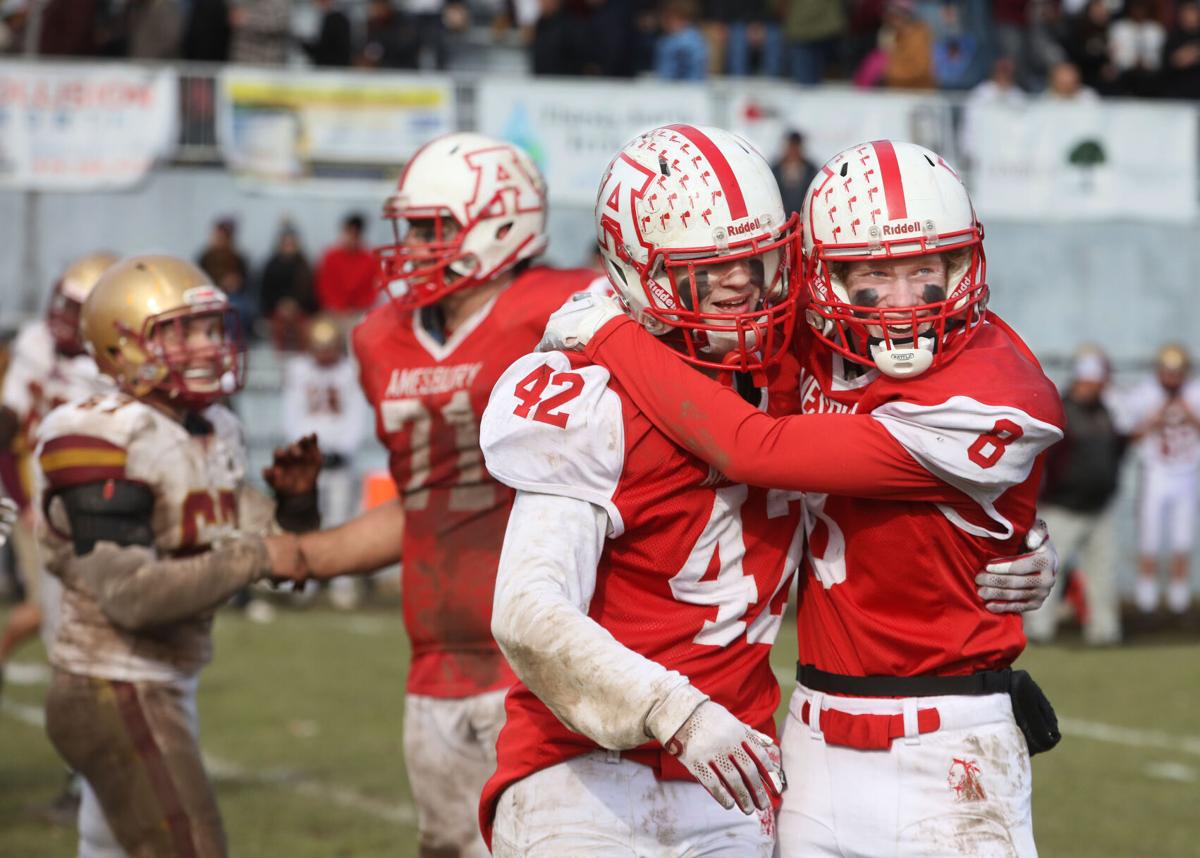 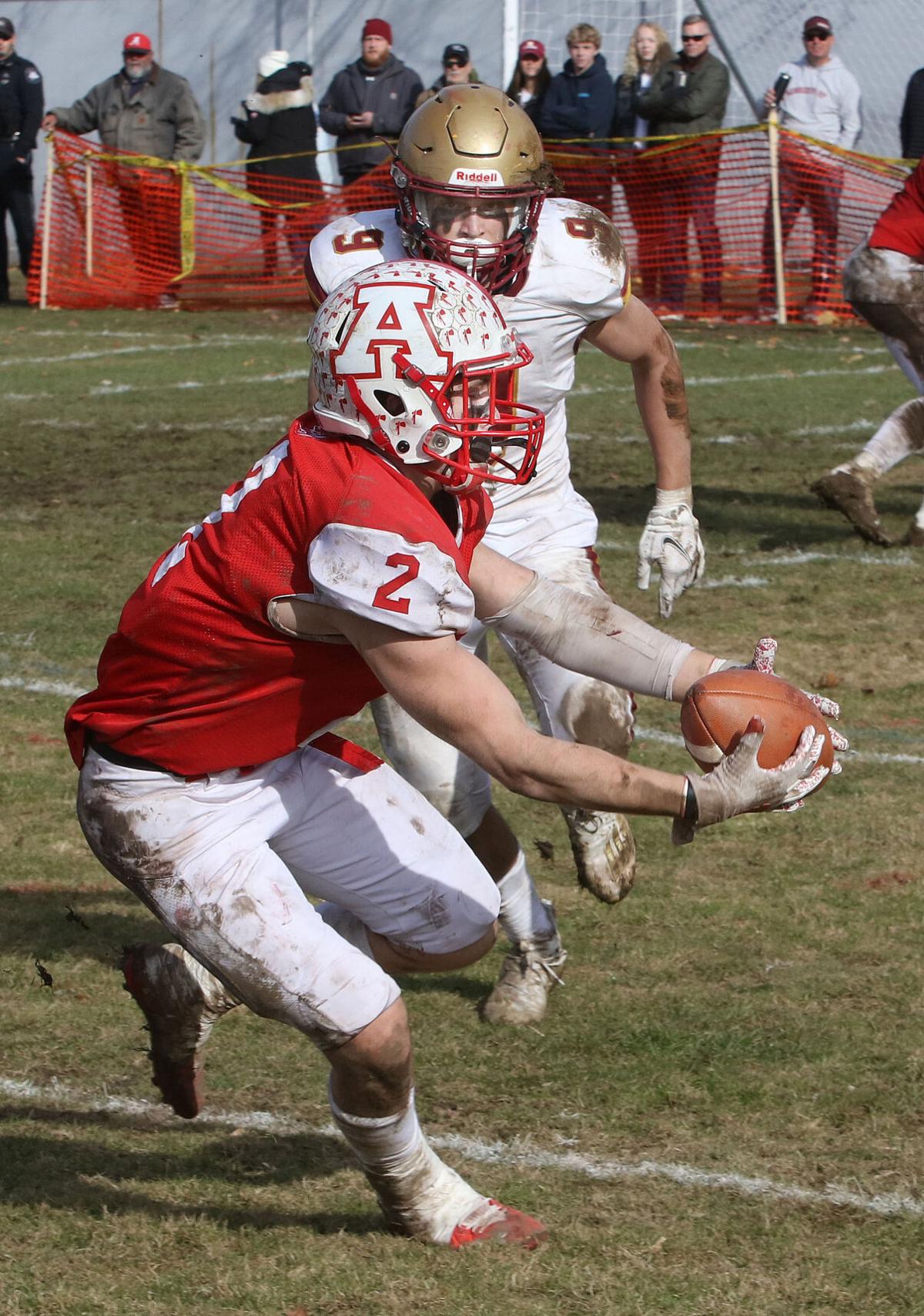 Amesbury’s Henry O’Neill catches a pass as Jeffrey Thurston of Newburyport closes in during the annual Thanksgiving day football game Thursday in Amesbury. 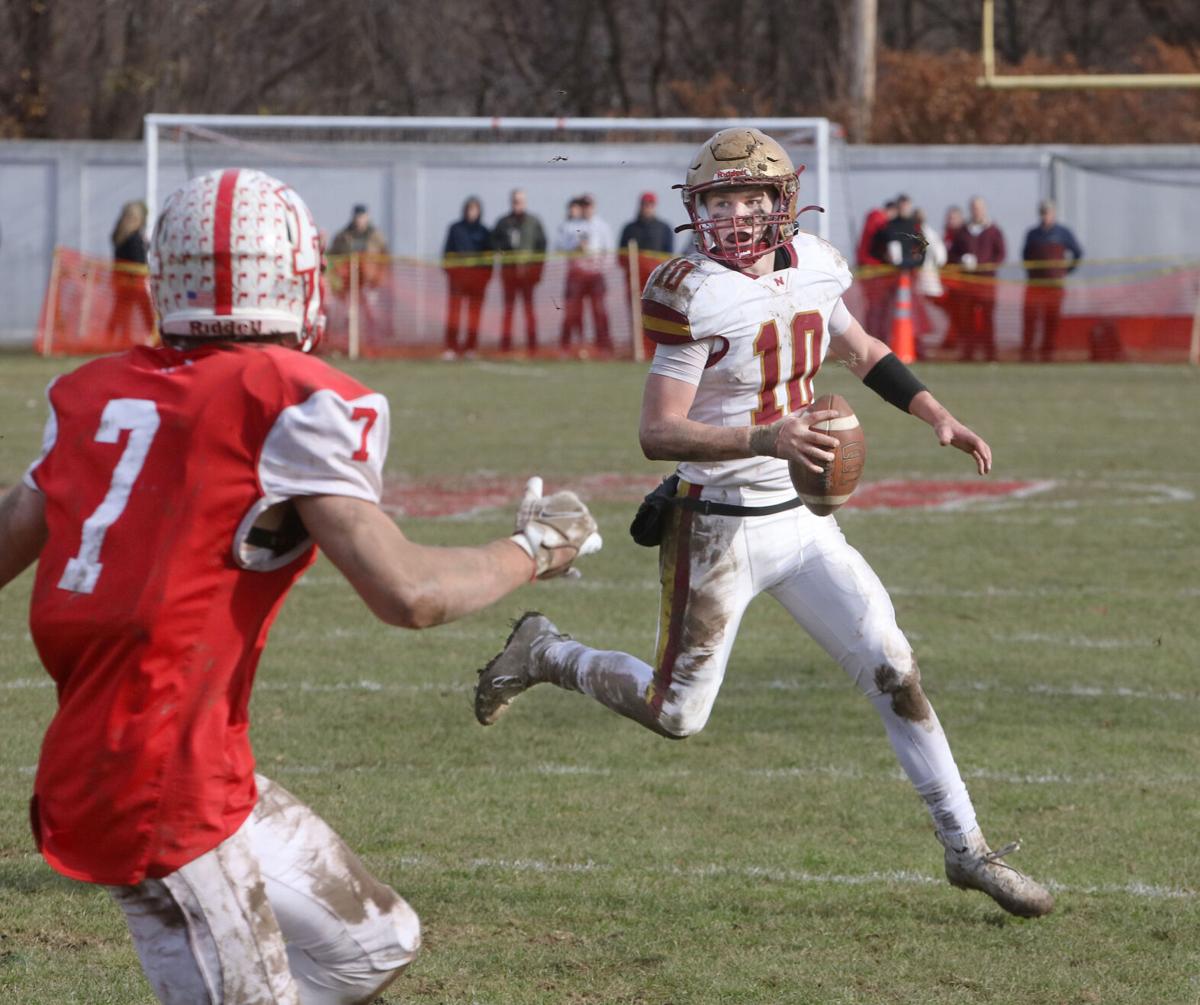 Newburyport quarterback Peter Sullivan rolls out to make a pass as Nick Marden of Amesbury closes in during the annual Thanksgiving day football match Thursday in Amesbury. 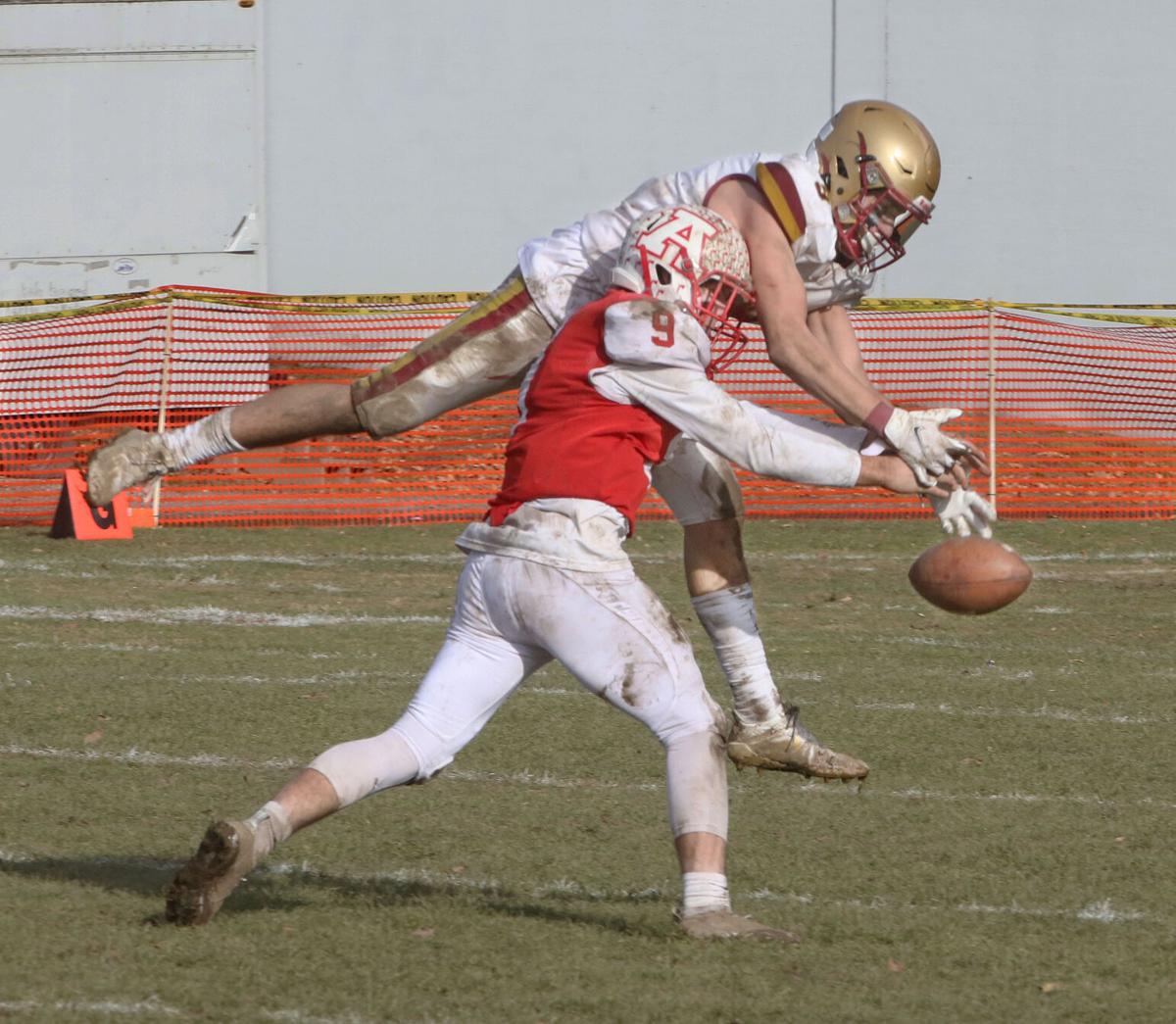 Jeffrey Thurston of Newburyport and Drew MacDonald of Amesbury compete for the ball during the annual Thanksgiving day football match Thursday in Amesbury. 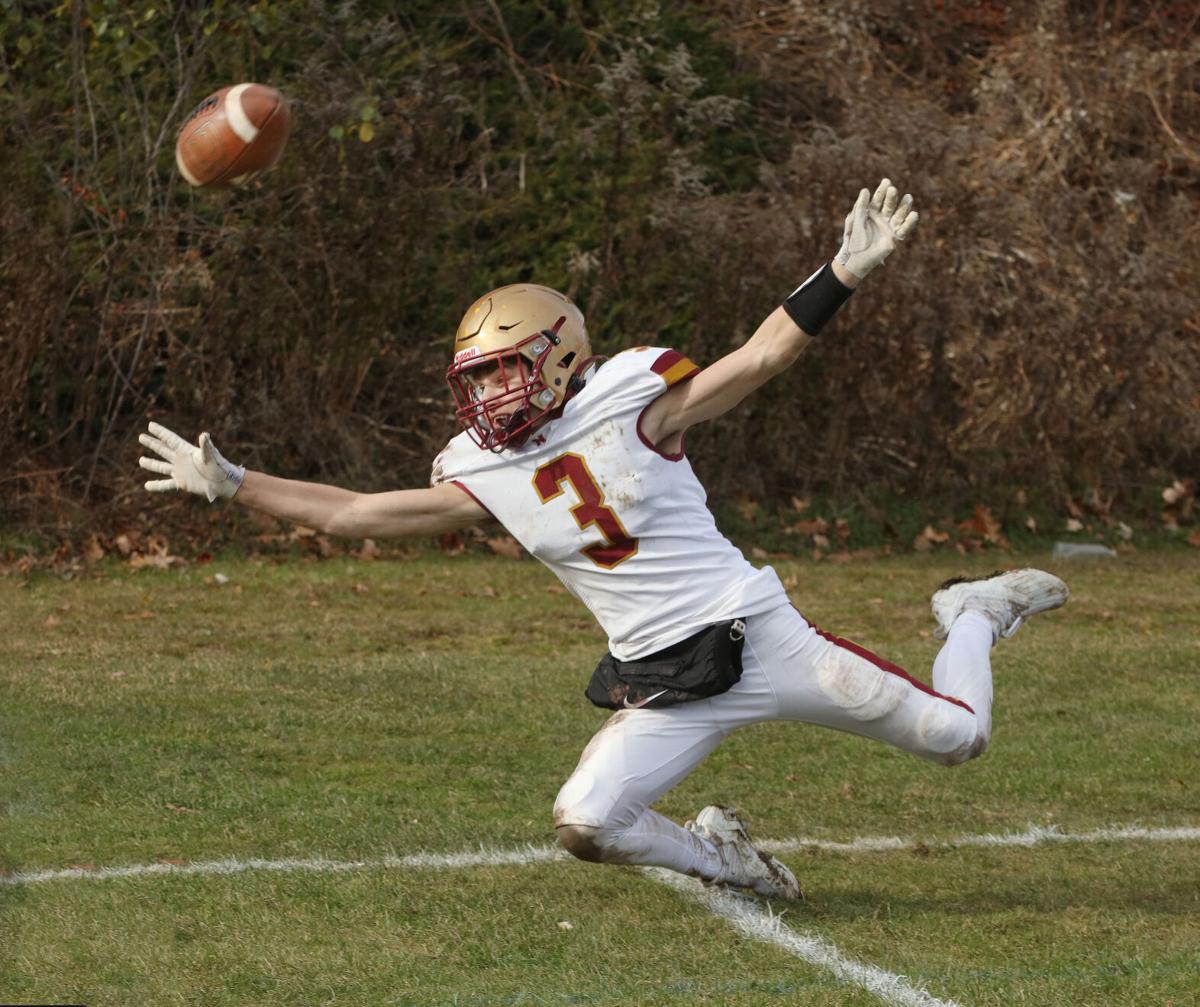 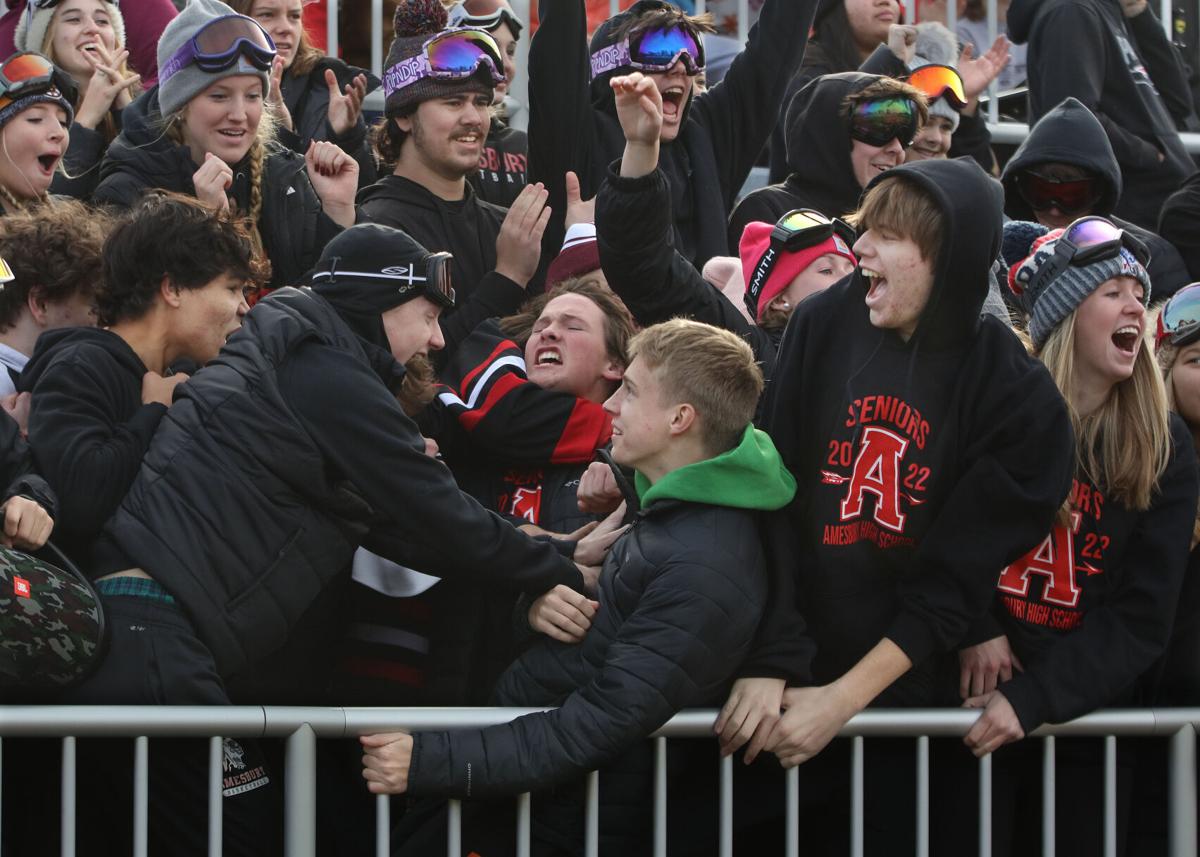 Fans of the Amesbury Indians celebrate their team’s victory over Newburyport. 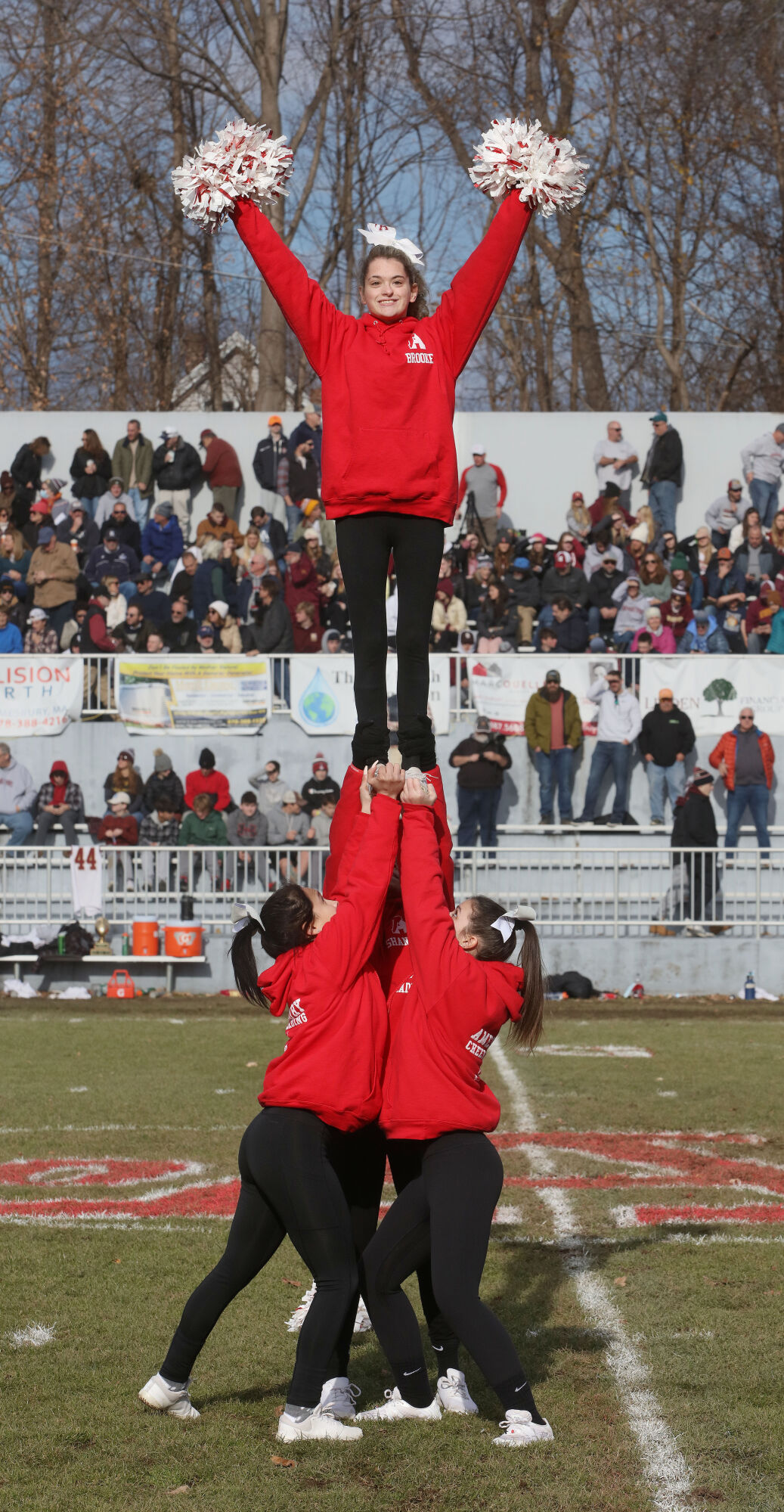 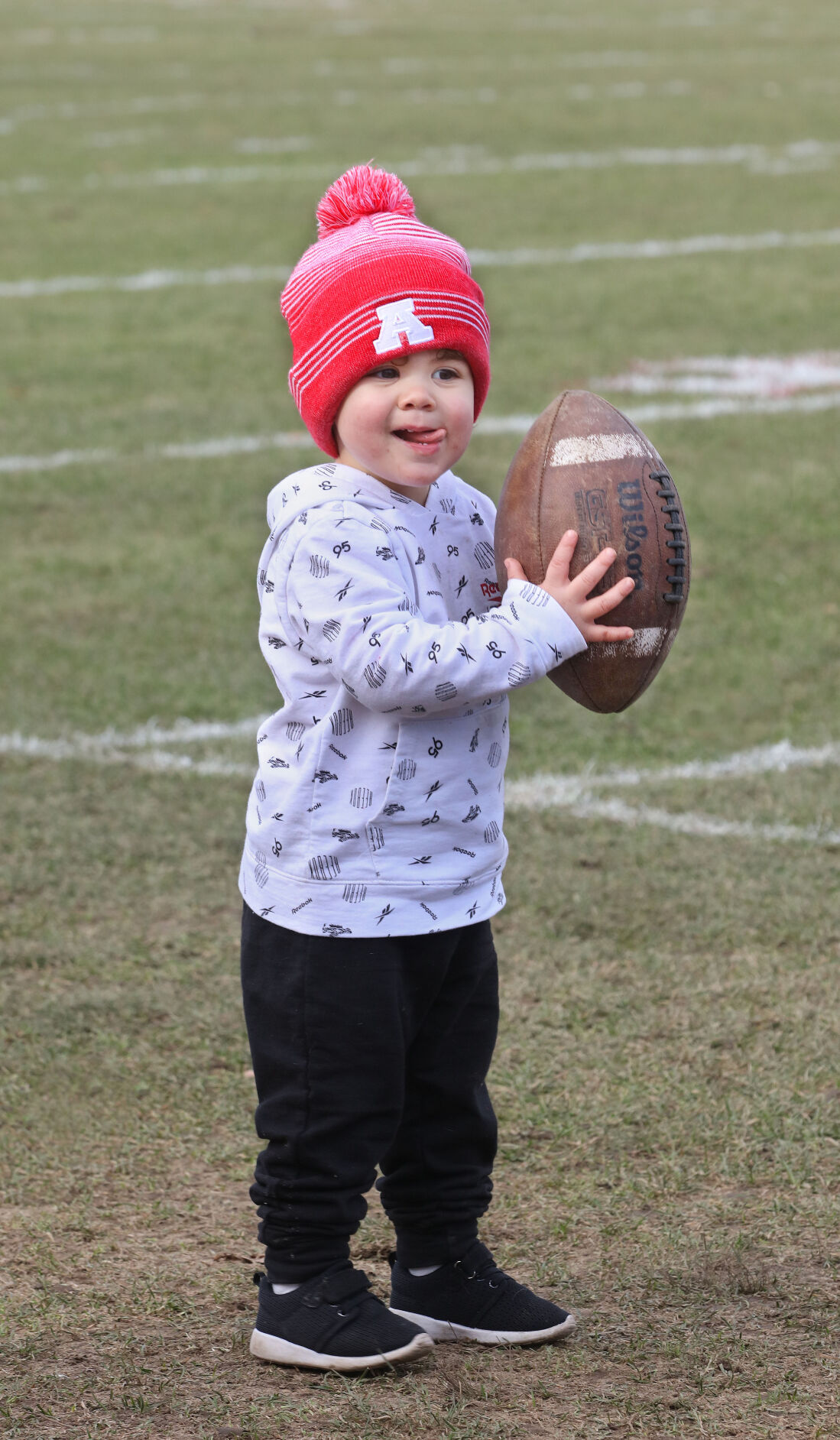 R.J. Guilmette, 2, prepares to throw the football while playing on the sidelines at halftime. 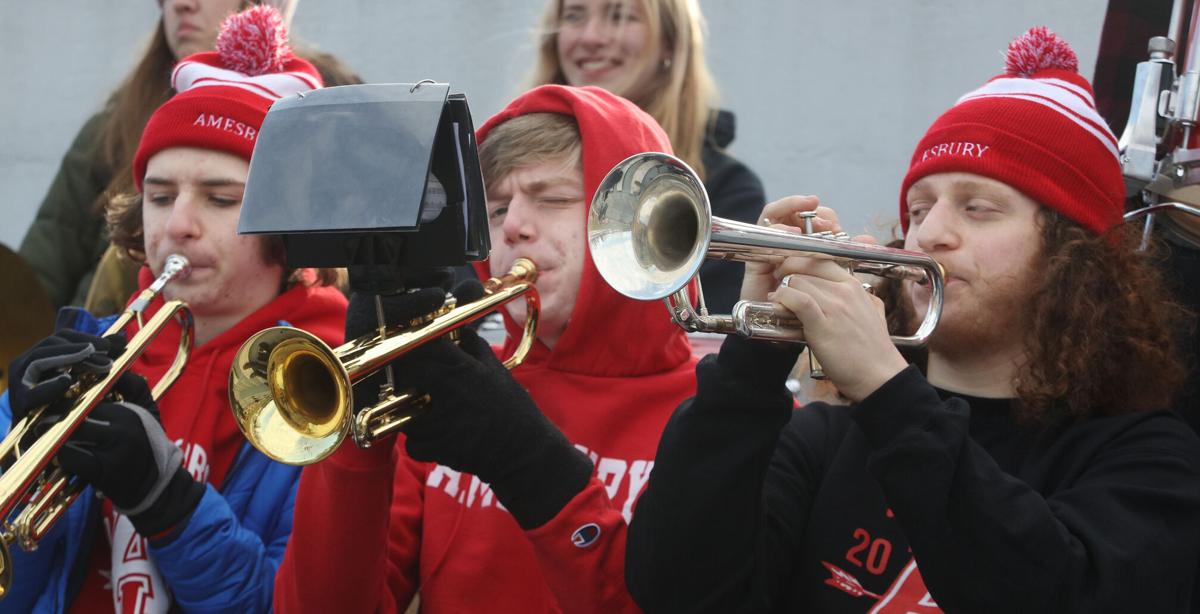 Amesbury’s Henry O’Neill catches a pass as Jeffrey Thurston of Newburyport closes in during the annual Thanksgiving day football game Thursday in Amesbury.

Newburyport quarterback Peter Sullivan rolls out to make a pass as Nick Marden of Amesbury closes in during the annual Thanksgiving day football match Thursday in Amesbury.

Jeffrey Thurston of Newburyport and Drew MacDonald of Amesbury compete for the ball during the annual Thanksgiving day football match Thursday in Amesbury.

Fans of the Amesbury Indians celebrate their team’s victory over Newburyport.

R.J. Guilmette, 2, prepares to throw the football while playing on the sidelines at halftime.

AMESBURY — Late in the third quarter of Thursday morning’s game, Shea Cucinotta stepped up to make a tackle, screamed in pain and rolled over to the Amesbury sideline clutching his left arm.

“My whole left arm was completely numb,” he said. “I couldn’t feel it.”

When he made the tackle, Cucinotta got a stinger in his neck that shot pain down the entire left side of his body. And, for what felt like the longest few minutes of his life, the Amesbury senior was scared.

Not for his own health, though, but for something else.

“My whole left arm went numb and I was really scared I wasn’t going to be able to go back in the game,” he said. “Honestly, I was more scared because it was my last game, you know? I didn’t want it to end like that.”

Thankfully, for both Cucinotta and Amesbury’s sake, it didn’t end there.

On a 4th-and-3 with just over a minute left and a packed house at Landry Memorial Stadium watching him, Cucinotta — cleared to be back in the game — — stepped in front of a Newburyport receiver and knocked away an incoming pass to force a turnover on downs. and with only one timeout left, that play essentially clinched Amesbury’s thrilling 12-7 win over Thanksgiving rival Newburyport Thursday morning, as starting QB Drew MacDonald simply took a couple of knees that sent the Indians to a win that also clinched them the Cape Ann League championship.

After the game, with the coveted J. Walter Chase trophy being passed around by his teammates, Cucinotta was near tears.

“I really wanted it today and I’m just so happy right now I can’t even tell you! This means everything. Coming off a win over Newburyport, I can’t describe it. It’s surreal!”

On paper, Amesbury (8-2) came in as the favorite over Newburyport (4-7), but records get thrown out the window on the holiday. Dual-threat Clipper quarterback Finn Sullivan got the scoring started when he threw an 8-yard dart to Logan Jones in the front of the end zone late in the first quarter.

The Indians immediately responded with a 3-yard Nick Marden TD run — set up by a 51-yard gain by Luke Arsenault — but failed the conversion to make it a 7-6 game. But with 42 seconds left until halftime, MacDonald found sophomore Oliver Ferreira on a 3-yard strike in the back of the end zone to put the Indians up 12-7.

Then, the second half was all about defense.

“I’ve been playing this sport since third grade, just playing Newburyport each year,” said Amesbury lineman Devin Gannon. “We didn’t beat them a lot when I was younger, so this game meant a lot to me.

“It’s surreal. When I was younger I couldn’t even imagine being here, you know what I mean? I can’t even put words to it.”

The Clippers went on a long drive to start the second half, but MacDonald came away with an interception in the end zone to give his team possession. Interestingly, both QBs — MacDonald and Sullivan — had picks.

But after a 3-and-out, Amesbury was forced to punt and Sullivan had a long return to set Newburyport up at the plus-30. The Clippers drove to a first-and-goal from the 1 situation, but Tony D’Arcangelo and the Indian defense came up clutch four straight times to force a turnover on downs.

“We did it,” said D’Arcangelo. “We worked hard and we did everything that we could. I mean, it all came in the preparation. This meant everything to us.”

Even after the goal-line-stand, the Clippers got a huge play when Aidan Blunt came away with an interception with 7:16 left to give his team possession. But the Indians forced another turnover on downs, and started to milk the clock with their potent rushing attack of Arsenault, Marden and Henry O’Neill.

The Indians drove to the Newburyport 27, but Peter Osazuwa came up with a massive tackle for loss to help force a turnover on downs to give the Clippers the ball back with 1:42 left and one timeout. Sullivan hit Jeffrey Thurston on a 7-yard gain to make it 4th-and-3 from the 34, but that’s when Cucinotta pulled his heroics.

“A CAL title? Not bad coming from the school with the lowest enrollment in the league,” smiled Amesbury coach Colin McQueen. “Our seniors played incredibly hard and made plays when we needed to make plays. We played Amesbury defense and we stiffened up down at the goal line. That’s a heck of a way to go out for this group.”

After Cucinotta broke up that pass, the celebration was on at Landry Field.

Winning on Thanksgiving is the way every team wants to end their season, and the Indians get to add CAL champions to the long list of accolades they’ve received this fall.

“It sounds amazing,” smiled D’Arcangelo. “Coming from a team where no one thought we were really going to go anywhere at the beginning. But it shows that with hard work and people who know how to play football, know the game and just know their assignments, anything can happen.”

Byfield - Early in the morning...